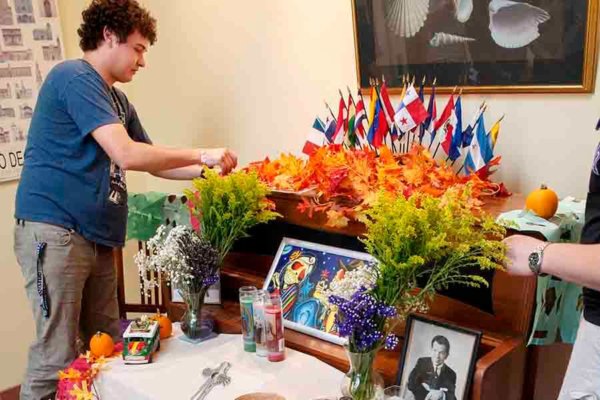 Ryan Pallas, a Spanish-language student at Nazareth College, helps decorate a Day of the Dead altar at the college in Pittsford, N.Y., Nov. 2. The Mexican tradition is often observed by families who build altars in their homes and decorate them with flowers, food and sugar skulls in honor of deceased loved ones. (CNS photo/Mike Crupi, Catholic Courier)

Timothy Egan, a New York Times opinion writer, wrote Oct. 19: “We are spiritual beings. But for most of us, malnutrition of the soul is a plague of modern life. That is one reason 200 million people worldwide a year make some sort of religious pilgrimage.” So, he made one himself, looking for “something durable: a stiff shot of no-nonsense spirituality.”

To affirm that we are spiritual is to acknowledge that we have a soul. And to go on pilgrimage denotes seeking its nourishment where past generations worshipped, struggled and died. The process leads us think about our own death, unmentionable in our crass, materialistic society.

Some years ago, I had a small investment account managed by a broker named Phil Genusa, whom I called every once in a while for advice and reassurance. But one day a strange voice answered the phone and said: “Phil is no longer with the firm.”

“What happened?” I asked. “Did he retire? Get sick? Go to another firm?” A long pause followed and then he said: “No, he died.”

Death is all around us. We sense it in the passing of the seasons, the waning light of autumn, the growing chill in the air, our weakening limbs no longer capable of the effortless miles we walked.

Recently, while spending a few days in our vacation home in New Mexico, one of our neighbors, Sonia Berg, informed us that her husband was dying of cancer in hospice at home. She said her husband, Adam, still enjoyed having visitors.

I went because I remembered how important it had been to receive visitors when I had been gravely ill. Moreover, we had been friends for decades and worked together in many conservation projects. He died three days after I saw him.

Similarly, we feel drawn to the cemeteries where our loved ones lie. On the same trip west, I wanted to visit the graves of my mother and father in the Denver suburb of Brighton, where most of us grew up. My thinking was that it might be the last time we would be able to do it.

In tune with the season’s messages, the liturgy celebrates two feasts, All Saints’ Day on Nov. 1, and All Souls’ Day on Nov. 2, in Mexico called the Day of the Dead, a national holiday. The festival harks to the ancient traditions of pre-Columbian cultures, observed for 2,500-3,000 years. Similar observances occur in other Latin countries, many U.S. communities, and even in Australia.

Mexicans go to the cemeteries to be with the souls of the dead. They build altars containing their favorite foods and beverages, as well as photos and memorabilia. Thus, they encourage visits by the souls of their loved ones to hear the prayers of the living, and to dance and feast with them.

We communicate with the dead when we pray to the saints, canonized or not. So it is not a far stretch to believe that souls are close by and in touch. My sister Lucy, whose husband, Charlie Branch, died seven years ago, senses his spirit nearby.

For years, my son Michael, a cook in Connecticut, had been preoccupied with placing a proper stone on the grave of his grandfather, Harold Gartman, who died in 1974 in Las Vegas, New Mexico, and was buried in Our Lady of Sorrows parish cemetery.

Decades later, learning the grave was unmarked, we had a headstone made. But the grave could not be located until recently. Michael went to New Mexico to supervise its installation and spruce up the site. It felt as if Michael had received a special mission from his grandfather’s soul!