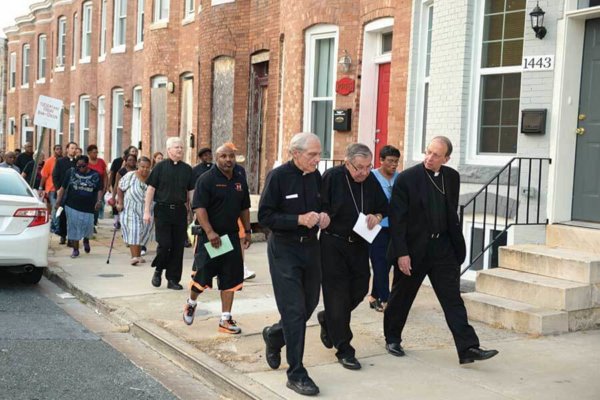 Again, the City of Baltimore has reached 300 homicides for the year. Though it may seem tiresome for us to write about the topic of gun violence regularly, consider that each of those deaths represents a son, daughter, brother, sister, mother or father.

In a presentation at the U.S. Conference of Catholic Bishops’ general assembly in Baltimore Nov. 11, Bishop Frank J. Dewane of Venice, Fla., who chairs the bishops’ Committee on Domestic Justice and Human Development, outlined the conference’s long-held stance of the need for “common sense” legislation that governs the availability of guns.

“Human life is sacred … and we need to approach this with the full strength of our teaching,” he said. Focusing mostly on the perpetrators of mass shootings, the bishop said, “It’s time for a different approach.”

He said the USCCB is not seeking a total limit to handguns, but would welcome broader background checks and some limits on gun ownership.

He likened common-sense restrictions on gun ownership, better background checks, limits on magazine capacity and assault-style weapons to restrictions in place on prescription drugs and drivers of vehicles.

“Such regulations are helpful, but they will not ban gun violence completely. For that to happen, we need new ways of thinking. At the heart of the epidemic is a shooter. That shooter somehow turns inward on pain or isolation or illusions that it becomes possible to become desensitized to others, that he loses all empathy,” Bishop Dewane said.

“As a society we have become less and less empathetic ourselves, a clear sign that we all are, to a degree, becoming dangerous.”

In the discussion after the bishop’s presentation, Archbishop William E. Lori said he understood that the committee’s presentation naturally focused on mass shootings, but that in many urban areas such as Baltimore, “We have a tremendous problem with gun violence and with people being killed on our streets.” He noted that vacant buildings and other issues contribute to the level of violence. He believes the church does what it can in these areas to break the cycle of violence.

Bishop Dewane acknowledged that the capacity of magazines for assault-style weapons was not the issue in urban areas as much as the availability of handguns used in so many crimes.

The next day, Archbishop Lori connected urban violence when he commented on a presentation on a pastoral framework for marriage and family life ministry. He said, “One of the glaring problems is that there is such a tiny percentage of intact families. That has a lot to do with violence, education underachievement, crime and unhappiness.”

He acknowledged that one document cannot do everything but said urban pastors would welcome something from the bishops that could help them build up families.

The church in many areas is doing what it can to stanch the flow of blood in the streets. But, it never seems to be enough. One such effort is Catholic Charities’ Safe Streets, which trains ex-offenders to be violence disrupters who stand between opposing factions to de-escalate situations in affected neighborhoods.

We cannot expect a few platitudes to end the homicides in Baltimore. It’s complicated, and there are so many aspects – drugs, housing, poverty, underemployment, family life, mental health concerns and so much more. But at its root, such violence evinces a clear disrespect for life, and that’s something we can work toward in our families, workplaces, churches and communities.

We have to do something – actually we have to do a lot of somethings: strengthen families, fight poverty, promote the dignity of life – so that when we get to the end of 2020, we’re not looking at 300 or more homicides in Baltimore again.