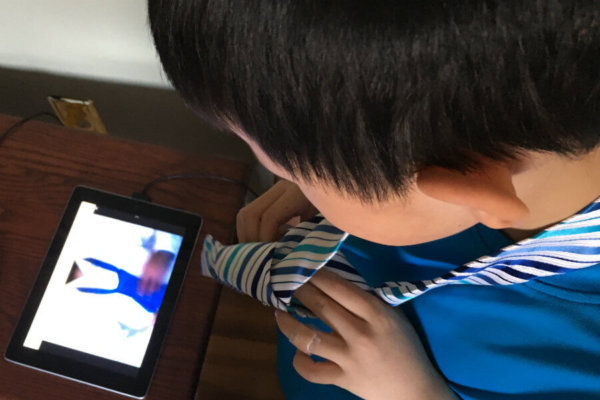 Our younger son is preparing for his First Communion, and he’s getting excited. My parents sent him a new tie with a First Communion tie tack to wear, and he could not wait to put it on when it arrived. It’s a real tie, not a clip-on or a zipper tie. When we opened the package, my husband was still at work and I was making dinner and…well…I wouldn’t have been much help because I don’t actually know how to tie a tie.

So I found a YouTube video, and he and his brother learned how to tie ties. So now I never need to learn how to tie one. 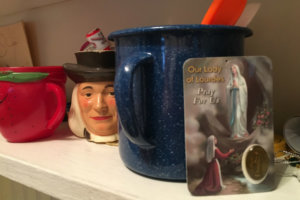 I do less homework than I used to, especially since our fourth grader does almost all of his himself. But every now and then an assignment pops out of nowhere—say an essay on how Ella Fitzgerald contributed to the world—and I suddenly wish I were an expert in Ella Fitzgerald, jazz music, and fourth grade essay writing.

Naturally, I’m not writing any essays myself, but somehow the difficult homework assignments can still be challenging for the whole family. The standards for writing are astoundingly high. I am fairly sure I could not make it through fourth grade language arts today.

Last night as I was trying to cook dinner while the essay was coming together in the other room, I turned and noticed a holy card on our kitchen shelf.

“Ah, Our Lady of Lourdes,” I thought. “Maybe completing this essay will actually take a miracle.” Then I looked at St. Bernadette kneeling before Mary, and I thought how, in The Song of Bernadette, she struggled in school. And so I turned the essay over to her.

It still didn’t come together easily, but I have no doubt it could have been worse. 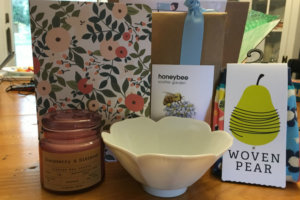 Our second grader has spent the past few weeks learning the Apostles’ Creed so he could win a prize at Sunday school—and he won his second Under Armour hat. He was so pleased.

He learned the creed by dancing around the dining room rapping the words. You’ve probably never heard the Apostles Creed done that way—I certainly hadn’t—but it really hammered each phrase home as he said it. I have to remember that dancing helps him memorize.

Meanwhile, I won a raffle I hadn’t remembered entering! When I wrote this blog about Sister Helen Prejean, I linked up with Ashley at The Big White Farmhouse, and she entered me in a raffle for five items. And I won! The five things arrived this week, and we had such fun opening each one—a candle, a pair of socks, a lovely little notebook, seeds for a honeybee garden, and a little white bowl.

Speaking of winning, we love board games, and our latest favorite is Carcassonne. It requires no reading, which I consider a plus, but lots of strategy and even a little collaboration. You draw tiles and then try to build castles and roads and monasteries and get points for the ones you create.

Our sons picked it up quickly and so did I—which shows how easy it is to learn since I still don’t understand Pokemon battles—but then you get more strategic about playing as time goes on.

The boys are now asking for stacking cups, which I hadn’t realized were a thing. I might put them on my list for a possible item to add to the household for summer vacation. 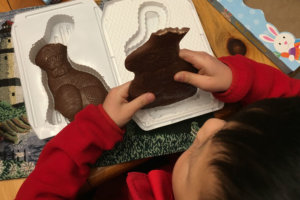 It’s still Easter, so we continue to work our way through the chocolate bunnies.

I am shocked by the lack of chocolate otherwise in our household, but the bunnies are here, and they don’t seem to be disappearing.

The other day, however, I spotted Daniel eating two at once.

I assume the bunnies have to be finished by Pentecost, so we have some time. 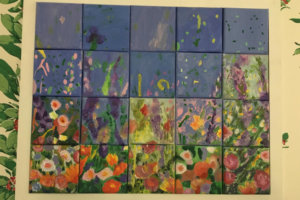 A few weeks ago when we celebrated John’s mother’s birthday, my brother-in-law and his wife had printed out a large picture, cut it into squares, and assigned us each a square or two to copy onto a small canvas. Then the small canvases were pieced together to make a large painting.

It was not easy for me, but it was fun. And I have been curious to see how it turned out after everything was put together. I wrote a little about how we made it in the 5th take in this post.

Last weekend we went to visit again and I saw the painting. I like it even more than I thought I would.

On our way home from visiting my in-laws, we stopped by the Donut Shack in Severna Park, Md. My husband grew up not far from there, so he likes to make return visits from time to time. It was dinnertime, and even though it’s the season for eating chocolate bunnies, the children still needed actual food. Fortunately the Donut Shack also serves soup, and they had turkey noodle on the menu.

Who would think you’d go to the Donut Shack for soup? But there we were. So we had to order a couple donuts, too.

Read more quick takes at Kelly’s blog, This Ain’t the Lyceum, and have a terrific weekend!