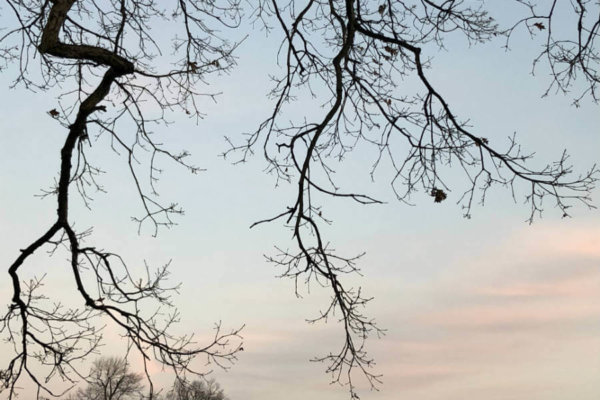 It didn’t seem like a big deal at the time. There was a storm, and our neighbor’s tree fell down. It clipped her front gutter and damaged the edge of her roof.

We chatted with her to make sure she and her family were all fine, and then we went on with our lives.

It turned out that once that tree was gone, our world changed. We started seeing our neighbors all the time. That single tree—a tree I had barely noticed before—was apparently such an obstruction between our homes that our paths had barely crossed. Once it was gone, we saw each other almost every day. We had talked every few months before. Now we were talking multiple times a week.

So the week before school started for our boys, I happened to bump into her—because there was no tree, you see—and I asked her how her daughter was doing in her first weeks at college. And she told me that her daughter had been unhappy and had come home. We chatted a while and then parted ways.

Then, two days later, I found out that the sitter I was trying to hire to take care of our sons after school wasn’t going to work out. I was a little panicked. It was Labor Day weekend, school was about to start, and I had no one lined up.

Suddenly I thought of our neighbor and her daughter. I texted her.

I have this problem, I told her, and I have a crazy idea. Would your daughter like to fill in for a couple weeks while we search for an afterschool sitter?

It turns out, it was kind of a crazy idea. Her daughter had never sat for us. I didn’t even know whether she liked children. But it was the kind of crazy idea that worked.

The boys adored her. The homework got done, the kids were happy, and everything went ridiculously smoothly. She loves playing board games and cards and hide-and-seek—all our favorites. One of her younger sisters filled in when she couldn’t do a few days, and everything just fell into place.

One night I came home and the boys had built sword-like weapons out of paper and scotch tape. They were fencing with them in the living room.

“I told them that was fine as long as they wore eye protection,” she said.

Which, of course, it is.

I felt like I won the lottery. Or wished on some babysitter-providing star. We had this amazing semester with a fantastic sitter who easily clicked with our children.

And it’s all because that tree fell down.

May 2019 be a year of many blessings for you. And, if a tree does happen to fall in your world, may it open up wonderful relationships and opportunities you never foresaw in 2018.