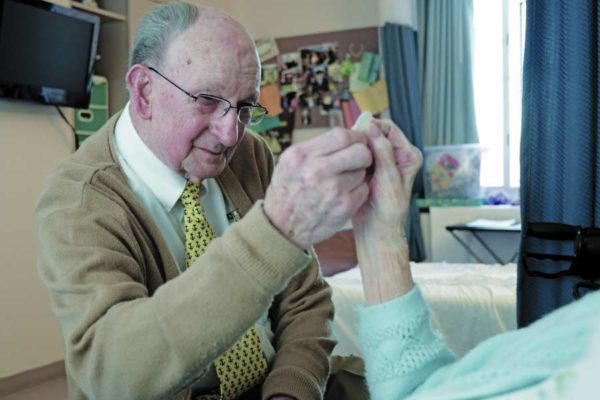 Editor’s Note: Inspired by Matthew 25:40-45, which concludes  “… What you did not do for one of these least ones, you did not do for me,” each month in 2017 the Review will provide an in-depth look at the Catholic Church’s response to those in dire need.

TIMONIUM – Fruit trees are exploding in color in early April, but oaks and sycamores are still budding, making it easy to observe birds building their nests.

Inside the hospice rooms at Stella Maris, meanwhile, the cycle of life nears its end.

“Can he receive?” Bob Hettchen asks a nurse in the hallway outside room 401.

Informed that the man is unresponsive, Hettchen makes a note on a photocopy that lists the faith, family dynamics and medical issues of the 10 terminally ill patients on his day’s rounds.

“The host might dissolve,” Hettchen said, of patients actively receiving communion, “but if it doesn’t, he could choke to death.”

Hettchen is one of the 71 men and women who volunteer in the hospice unit at Stella Maris. They offer comfort, companionship and holy Communion to the dying and their families.

On a sprawling Catholic campus, their ministry accentuates the serenity of Stella Maris, a 412-bed nursing facility which includes long-term and dementia care, rehabilitation services, 145 crucifixes in public areas alone and, since 2009, a retirement home for the Redemptorists of the Baltimore Province.

Its fourth and fifth floors include hospice wings, where, as a brochure states, the focus is not on “curative measures.”

Stella Maris was established in 1953. Since 1969 its staff has included Religious Sister of Mercy Karen McNally, now chief administrative officer.

“Not being afraid of death, to walk this journey with people, it’s a sacred thing,” she said. “It requires being a good listener, and patience. What you are doing is helping make the transition more comfortable. For some (patients), it’s traumatic. For others, there is a sense of peace.

“You’re either made for hospice care, or you’re not.”

Stella Maris is sponsored by the Sisters of Mercy, whose own retirees reside at The Villa, the joint retirement convent on Bellona Avenue. Every Tuesday, Sister Elaine Sebera drives Sister Anne O’Donnell from The Villa to Stella Maris, where the latter adds to a ministry of remarkable scope.

“I’m an educator, not a nurse,” she said. “I was able to teach children for 53 years, little people with their eyes wide open. Now, I’m with people about to experience death. I feel as if some of them come back to being like children. Some are vivacious. Others are quiet.”

The 82-year-old sister has macular degeneration, hearing loss and uses a walker, but her spirit is willing.

“Some have nobody with them,” Sister Anne said. “If they want, we talk. Some are open to talking, some are not. Whether they’re asleep or awake, I pray and visit with them.”

Her availability extends to  loved ones.

Sarah Lennon died at Stella Maris April 1, 2014. She had been a parishioner of St. Joseph, and had sent her three children to its parish school.

“Sister Anne encouraged us to share memories,” said Mary Beth Lennon, president of Mercy High School in Baltimore, of the scene at her mother’s death bed. “She gathered us together in a circle and led us in prayer for our mother. Sister Anne was totally devoted to all her students. We felt that same love and dedication in my mother’s final hours.”

“I’m an open kind of person,” offered Sister Anne, the fourth of six siblings. “We were all extroverts, except for one brother. I like to talk.”

Connie Hettchen, meanwhile, described her husband, Bob, as a “private person,” albeit one who has “blossomed” as a volunteer at Stella Maris.

“He only took the hospice care training workshop because of me,” she said, while manning the receptionist’s desk in the Senior Day Center.

The parishioners of Our Lady of Grace in Parkton have commuted together a long time.

Connie spent 30 years as the secretary of the high-voltage testing company in Towson that Bob owned. While both of their mothers died of Alzheimer’s, Bob’s at Stella Maris in 1998, their harshest experience with death came in 1989, when the middle of their three children, Paul, was electrocuted at age 22.

“I’m emotional to an extent, mostly about my family,” Bob Hettchen said. “I’ve had stage 4 cancer, open-heart surgery and prostate cancer. I’m a pragmatic person. I relate very well to older people. I know what the story is with the people I’m visiting.”

The 84-year-old pauses in the fourth-floor library, which includes a pullout bed and a shower for visiting families. He stops by Vera’s Room, which a placard says is a “Generous Gift of Vera Duvall Guttman.” A commercial on the television includes the plaintive voice of Edith Piaf.

“I have Communion if you like,” Hettchen informs a 90-year-old. He asks about her home parish (Govans), and if she is hungry (no).

“Is there anything I can do for you?” he asks, before taking a seat and simply holding her hand.

Father Larry Johnson has directed the Pastoral Care department at Stella Maris for 22 years. Its resources include home hospice ministers, such as Paul Merkle, a parishioner of St. Isaac Jogues in Carney who was raised at St. Michael the Archangel in Overlea.

In 1996, Merkle and his wife, Mary, took her parents, Frank and Dorothy Greco, into their Fullerton home – “We had plenty of room,” he said – where they remained until their deaths, in 2002 and 2003, respectively.

He was also shaped by 25 years as a Baltimore County police officer, responding to crime scenes, auto fatalities and entering homes where a shut-in had died alone.

“You never know what you’re going to deal with each day,” said Merkle, who retired as a sergeant in 1997. “Some police work, it’s not all that different from being in the clergy. You’re dealing with people who might be at a difficult stage in their life; you have to meet them where they are.”

Merkle is 64. He was a senior at The John Carroll School in Bel Air when he joined the Knights of Columbus, but didn’t become an extraordinary minister of holy Communion until he was a home hospice minister.

“It’s an interesting line of volunteerism,” he acknowledged. “I’ll have a good visit with someone. By the weekend, they might be gone. Someone else is still there six months later. I enjoy bantering with patients, about the Orioles or grandchildren. Most don’t want coddling.”

“Hospice allows patients to live their life each day, until the Lord takes them,” Merkle said of entering homes where death is waiting. “I guess I’m rewarded by the thanks I get, and seeing that they were able to get through these situations. There’s nothing heroic about it.”