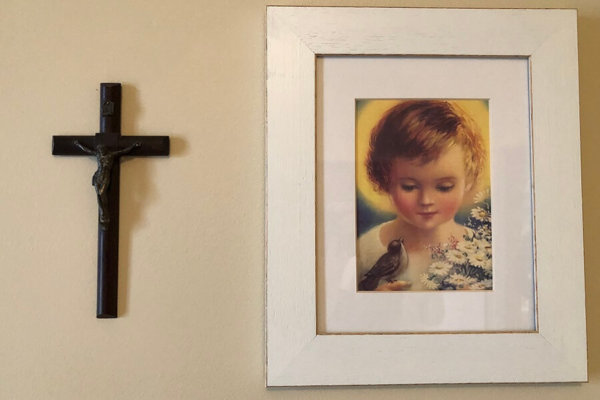 One year ago today my husband’s sister Robin passed away in her twin sister’s home. It was late that afternoon when she lost her courageous battle with lung cancer surrounded by many of her family members.

It’s hard to believe a full year has passed.

Robin’s twin sister has been working to decorate the room where Robin died with items to celebrate Robin’s life, and she asked me whether my friend, Father Tim Brown, S.J., would come and bless the space. Father Brown is one of the busiest people I know, so I was delighted when he said he would be able to join us for a trip to Carroll County this weekend—just days before Robin’s anniversary.

I wasn’t sure what to expect of our visit. I suspected it would be emotional—and it was. But it was also beautiful. 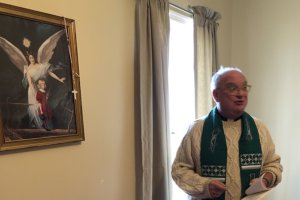 Father Brown had brought a few reflections for people to read, and he led us all in prayer. He shared his own memory of meeting Robin in the hospital a little more than a year ago. Then he invited others to speak.

There were tears as people shared memories and spoke about what the past year has been like. But there were also smiles. There was peace. And there was connection—with God and with one another.

As we stood in the bedroom where Robin spent the last weeks of her life and said her final goodbyes—for now—I was in awe of how special it was to be together in reflection and prayer.

I never know what to do when people lose someone they love. I always feel so helpless. But watching Father Brown lead my husband’s family in a beautiful moment of blessing, I was struck by the tremendous gift he was giving to us simply by being with us. And I was moved by the fact that so much of the family had come together on such little notice.

Being present. So simple. So extraordinary. Maybe it’s the least we can do when someone we love is facing grief—and maybe it’s also the most we can do. I don’t know much—or anything—about how to help anyone navigate grief, but I do believe that burden should never be carried alone.

We belong to one another.