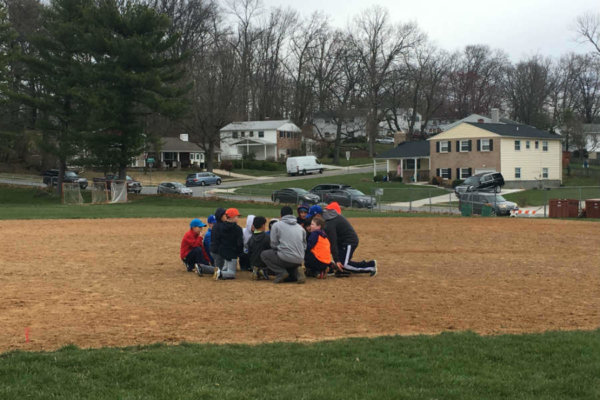 A chilly wind is blowing as we pull into the parking lot.

We can’t find our team, so we walk the fields for a while. We finally find them, and there are a flurry of introductions full of names we won’t remember.

Then the baseballs start flying. Another mom and I who have just met instinctively step back…and then back again. No one seems to know which way to throw or how to catch. Batting isn’t much better. But the boys are excited. There’s a sense of anticipation in the air.

As I look around the field, I wonder which of these 8-year-olds will end up pitching this season. Who will play first base? Which of the boys will learn the most? Which one will pick the dandelions in right field? Will they all learn how to win—or lose—gracefully?

At that first practice, anything and everything is possible. The season lies ahead of us fresh and clean and exciting. Maybe this team, I find myself thinking, will win it all.

There are so many unknowns, so many obstacles they may hit on the way. But there are also limitless possibilities. Today there’s a little talent, a little experience, and loads of potential.

So far it has been a cold, blustery April. There are glimmers of green, wispy yellow forsythias, cherry blossoms, daffodils, and a few daring pink flowers that are poking out of their buds on our magnolia. Spring isn’t bursting into bloom yet, but it will come—just as this baseball team will blossom.

Watching the players trying to find their footing on the field, not knowing one another’s names, I wonder whether this is how the apostles were after Jesus’ resurrection. Even as they must have grasped that the goal was to spread Jesus’ message, they couldn’t have been sure how to begin.

They must have felt awkward and uncertain, inexperienced and untrained, not quite up to accomplishing Jesus’ work on earth. They weren’t yet filled with the Holy Spirit they would receive at Pentecost. They were awaiting direction.

I like to think, though, they also sensed the newness that lay ahead of them. Maybe, even as they had their doubts and questions and concerns, they were also full of anticipation and expectation. They must have talked about their faith and Jesus and how they could fulfill His mission. Maybe they felt as ill-equipped as I often do. But they stayed. And they kept trying.

Back on the baseball field, the coach gathers his players around him. It seems even colder than it was when they started playing catch. My son tells me later that he couldn’t feel his fingers—which explains why no one can throw or catch well.

The sky is bleak, and everyone is shivering. As the coach hands out the team caps and shirts, though, the boys are all smiles. They slip on their hats, and suddenly they aren’t just a group of children. They are a team.