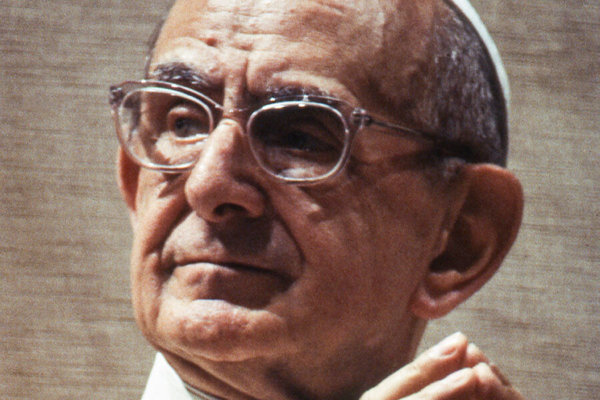 Pope Paul VI is pictured in this undated photo. Pope Paul, who served as pope from 1963-1978, was declared blessed by Pope Francis Oct. 19, 2014. He is most remembered for his 1968 encyclical, "Humanae Vitae," which affirmed the church's teaching against artificial contraception. (CNS photo/Giancarlo Giuliani, Catholic Press Photo)

In 1975 Blessed Pope Paul VI, issued a landmark document, “Evangelii Nuntiandi” (“Evangelization in the Modern World”). Drawing together the teaching of the Second Vatican Council, Pope Paul described evangelization as the church’s deepest identity and mission.

In short, “the church exists to evangelize” – to proclaim Christ in the power of the Holy Spirit so that people in our times will open their hearts to him and find in the Lord and in his church salvation from their sins and the path to authentic holiness. This mission is directed toward those who have not yet heard the Good News but it is also directed toward those who no longer practice their faith.

Evangelization was also central to the papacy of St. John Paul II. He called for a “new evangelization” – not new in content, but new “in its ardor, methods and expression.” He reaffirmed the church’s mission to proclaim the Gospel to those who have never heard it but also stressed the obligation of the church to evangelize those whose faith had grown cold and to re-evangelize nations where formerly the faith was strong but now is fading.

Pope Benedict XVI, like his predecessors, emphasized that evangelization is not merely a program but rather an opening of the heart. It involves our being agents of the Holy Spirit in helping people have a profound experience of Jesus and his love, a love that opens them to the Word of God, the sacraments, to virtuous living and ultimately to their vocation to holiness.

Evangelization is clearly central to the pontificate of Pope Francis. With a pastor’s heart, he penned “Evangelii Gaudium,” (“The Joy of the Gospel”). He speaks of the urgency of this mission and calls each of us and our parishes and church institutions to “a missionary conversion.”

He challenges bishops and priests to take the lead in creating dioceses and parishes that are alive, on fire with the mission of spreading the Gospel. This challenge animates our parish planning initiative here in the archdiocese as we seek to make “missionary disciples” through this important work we do together.

Evangelization, then, is at the heart of the Second Vatican Council as well as the pontificates of all the popes following the council. Their teaching is based on the Lord’s missionary mandate to the Apostles: “Go, therefore, and make disciples of all the nations, baptizing them in the name of the Father, and of the Son, and of the Holy Spirit” (Mt 28:19).

Yet, a recent survey which asked various church congregations whether spreading the faith is a high priority produced troubling results. In conservative Protestant congregations, some 75 percent answered in the affirmative; 57 percent of African-American congregations agreed. Among U.S. Catholic parishes, only 6 percent said the same, not exactly an enthusiastic embrace of the central thrust of Vatican Council II or the teaching of recent popes.

Their prophetic warnings go unheeded as the number of practicing Catholics, including many young people, declines. This constitutes a kind of “soft” dissent, not from a specific teaching but from the Lord’s missionary mandate and from the church’s very identity and mission. It’s not that most Catholics reject outright the call to spread the Gospel; it’s more that they decline to participate in it, often because they themselves have never been evangelized and adequately catechized.

This May the church celebrates the Solemnity of Pentecost, that event when the Holy Spirit came upon the Apostles as they prayed in the Upper Room. In the power of the Spirit, their hearts and minds were opened so that they truly grasped who Jesus is, what he taught, and what he did to save us. And they received the wisdom, strength and courage to go forth and spread the Gospel as the Lord had commanded.

Their wholehearted witness to Jesus and their courageous preaching brought extraordinary results. Let us unite in praying earnestly for a new Pentecost in our day. In the power of the Spirit let us open our hearts to Jesus, live his Gospel fully – including those teachings that are counter-cultural – and to speak of him in love to others so as to win them for Christ and his church.