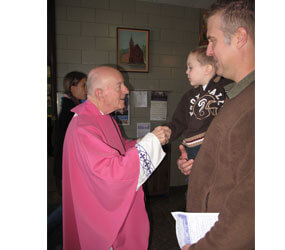 EDGEMERE – Standing at the back of St. Luke Church following a Dec. 11 Mass marking his retirement, Monsignor Joseph S. Lizor Jr. extended both arms to shake hands with the many parishioners who wanted to greet him. Several children gave the 79-year-old pastor homemade cards, while hugs seemed to engulf the vested clergyman faster than he expected.

“I’ve never been at a place where people love to hug as much as they do here,” the beaming monsignor admitted with a laugh.

After serving the East Baltimore County parish for 15 years – the only pastorate of his 53 years as a priest – Monsignor Lizor is entering a new phase in life as he approaches his official Jan. 1 retirement. Leaving St. Luke will be difficult for him and the people who love him.

“I liked everything about it,” Monsignor Lizor said. “I liked the location and the spirit of the people out here was great. The people are very gracious.”

Prior to a Dec. 11 reception that featured desserts tagged with images of Monsignor Lizor, some of those who worked closest with the Hagerstown native said he did much to rejuvenate the faith community.

“He actually took our church and did a complete turnaround in our parish with attendance,” said Sharon Winter, pre-school director at St. Luke.

Winter noted that Monsignor Lizor went door-to-door, encouraging people to attend Mass. He was passionate about education, she said, raising more than $300,000 for an endowment that provides tuition assistance at Our Lady of Hope/St. Luke School in Dundalk.

“He was a great leader in terms of teaching us so much about why we’re Catholic and how we can practice our Catholic faith,” Winter said.

Monsignor Lizor’s reach extended beyond the parish community, Winter said, as he served as a fire chaplain and was involved in civic outreach.

Sandy Walsh, a longtime parish volunteer, called Monsignor Lizor “the kind of priest the mold should have been made out of.”

“He’s just the absolute priest,” she said. “If someone’s sick and on the way to the hospital, he actually beats them there to take care of them. He’s someone you can talk to – and he gives the kind of sermons you actually learn something from.”

Robert Zacherl said the parish hopes to maintain some of the traditions Monsignor Lizor brought to the parish – most especially the recitation of the Prayer to St. Michael prayed at the end of every Mass.

“He’s been a blessing,” Zacherl said, “and, I don’t think anyone would argue with that.”

In his retirement, Monsignor Lizor will live at the Heartlands Senior Living Village in Ellicott City and hopes to assist in area ministry. As parishioners poured accolades on him at his retirement reception, the priest was a bit uncomfortable with the spotlight.

“I’ve never been one to look for attention for myself,” he said. “I’m interested in the people and taking care of the people.”