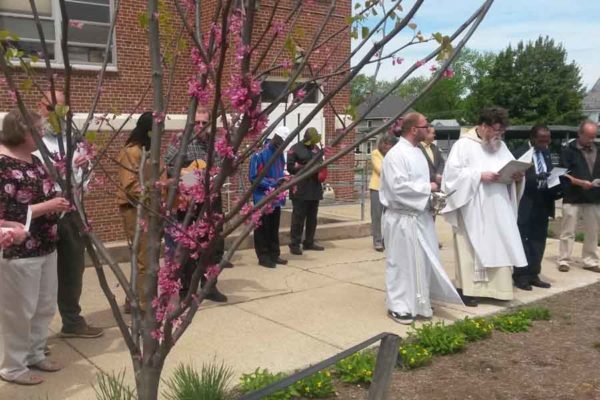 On the Second Sunday of Easter at St. Anthony of Padua in Gardenville, Father Ty Hullinger and his congregation underscored the name of their neighborhood.

A day after Earth Day and five days before Arbor Day, the parish held one liturgy April 23, during which it celebrated creation and blessed several projects that illustrate its commitment to a healthier planet.

With the assistance of Interfaith Partners for the Chesapeake, Blue Water Baltimore and grant moneys from the National Fish and Wildlife Foundation, St. Anthony of Padua converted a portion of the parking lot on the east side of its rectangular campus on Frankford Avenue into a stormwater bio-retention garden.

Once home to one of the largest parish schools in the Archdiocese of Baltimore, St. Anthony of Padua still possesses an inordinately high percentage of impervious surfaces, but now at least 1,400 square feet of all that asphalt and pavement have been replaced with something greener.

“This shows what a parish can do,” Father Hullinger said, “to help improve our natural environment and reduce and cleanse stormwater runoff.”

He came to the assignment of pastoring St. Anthony of Padua, St. Dominic in Hamilton and Most Precious Blood – “One Family at Three Locations” – in 2010 with considerable experience in the environmental field.

He was working as a landscape architect in Baltimore when he converted to Catholicism and then entered St. Mary’s Seminary and University. Ordained in 2004, Father Hullinger previously served in Allegany County, an assignment he alluded to in his homily.

It ranged from “On Care for Our Common Home,” Pope Francis encyclical on creation; to Aldo Leopold, a Depression Era pioneer in wildlife ecology; to the recent Maryland General Assembly session, which concluded with Gov. Larry Hogan signing into law legislation that bans fracking, the controversial method of drilling for natural gas.

“Your signature mattered,” Father Hullinger told his parishioners, of anti-fracking petitions. “That’s a win not just for Western Maryland, but for all of Maryland, and all of creation.”

After Mass, Father Hullinger blessed the Northeast Interfaith Prayer Garden, which was completed in 2000; the bio-retention garden; five Eastern redbuds that were planted between its parish center and former school, which now houses the Baltimore International Academy, a K-8 charter school; and, finally, two white oaks in front of the parish center.

The prayer garden and bio-retention garden book end the convent that once housed the Sisters of St. Francis of Philadelphia. A portion of it is being rented by Asylee Women Enterprise, a collaboration of eight Catholic women’s religious communities in Baltimore.

Some of the women it serves are growing vegetables and composting in another plot, where yet more pavement was dug up and transformed by Christian Lafferty, facilities manager.