Members of the "Trash Bashers" give a cheer on the parking lot of St. Mary of the Assumption in Govans April 13 before heading out to clean up York Road. (George P. Matysek Jr./CR Staff)

Kneeling on the sidewalk on the corner of York Road and Woodbourne Avenue on a recent Saturday morning, Lance Bendann reached a gloved hand into a gutter not far from St. Mary of the Assumption in Govans.

With a few good heaves, the septuagenarian freed glass liquor bottles and mangled aluminum cans that were tightly wedged between the metal bars of a storm drain.

“If we can get the trash out, it doesn’t wind up in the Inner Harbor,” said the longtime parishioner of St. Mary, wearing a neon jacket and keeping an eye on passing cars and buses.

After tossing the items into a large plastic bag, he was on to sweeping up cigarette butts, candy wrappers, banana peels, fast-food packaging and other refuse dotting the sidewalks of a three-block area surrounding the North Baltimore church.

Bendann is the leader of the “Trash Bashers,” a diverse band of dedicated volunteers based at his home parish since 2015. The dozen or so members clean up York Road on the second and fourth Saturdays of the month, ending their early morning outreach with a cookie “tailgate party.”

The Bashers’ primary goal is to make their community more beautiful.

Every mayor has made it a priority going back to the “trashball” campaign of William Donald Schaefer in the 1970s, but keeping streets clean remains a struggle.

As some of the Trash Bashers told me, some people simply just don’t care. They grew up seeing trash tossed to the curb, so they don’t know any better.

“There’s a lack of respect,” said Tom Krol. “It’s not just here. It’s the entire city. We are a disposable society, so we just throw everything away.”

Signs of intractable social problems were evident in some of the items I saw the Bashers pick up, most notably multiple hypodermic needle caps and a lone red die.

Yet, as the Bashers told me, there’s more to the story.

“We’ve got four liquor stores and five carry-outs in the block,” said Helene Perry. “If you want to generate trash, that’s the way to do it.”

The retired physics professor from Loyola University Maryland pointed out that there simply aren’t enough trash cans in the city.

Earlier this year, with the help of a grant from the Maryland Department of Natural Resources, the Trash Bashers worked with area merchants to install several small trash cans on the walls outside businesses along York Road.

“Those cans get stuffed full within six hours,” Perry said. “It goes counter to the conventional wisdom that people won’t use them.” 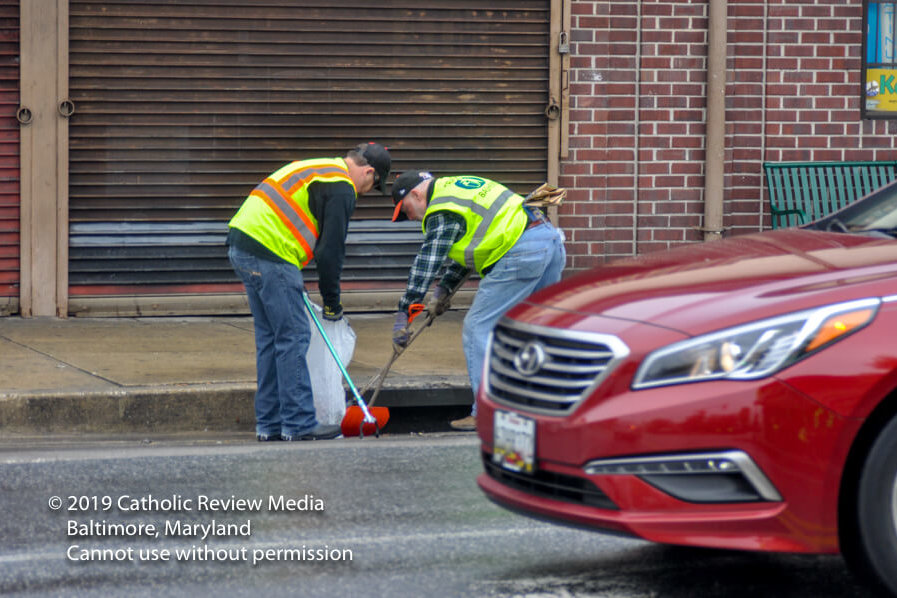 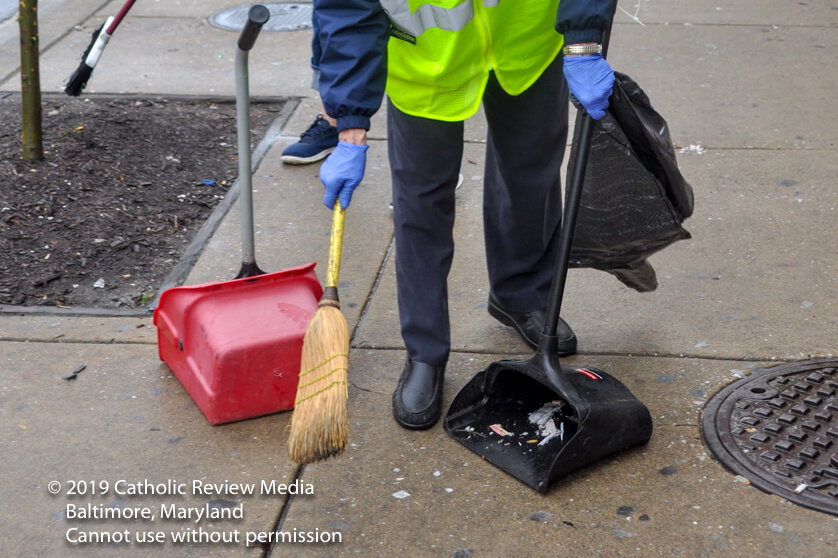 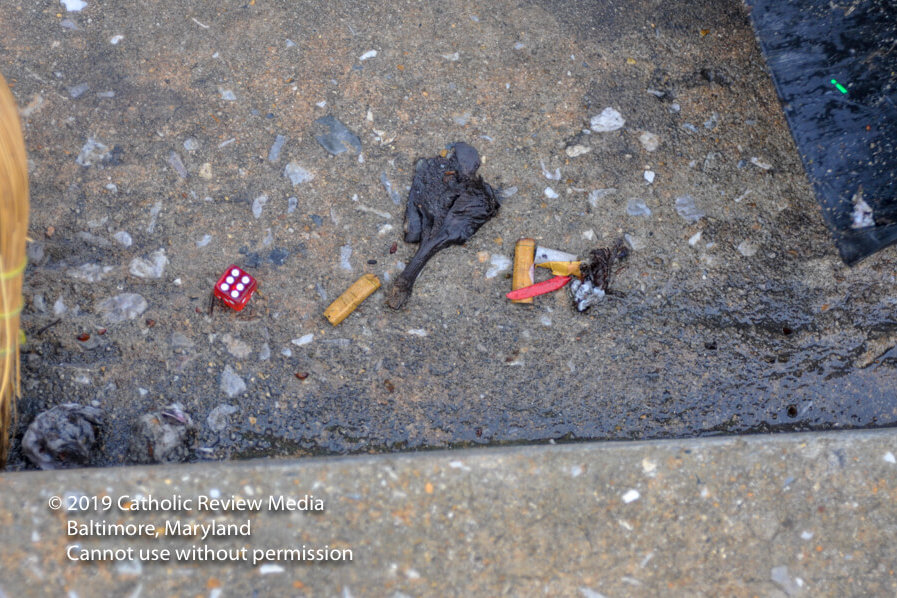 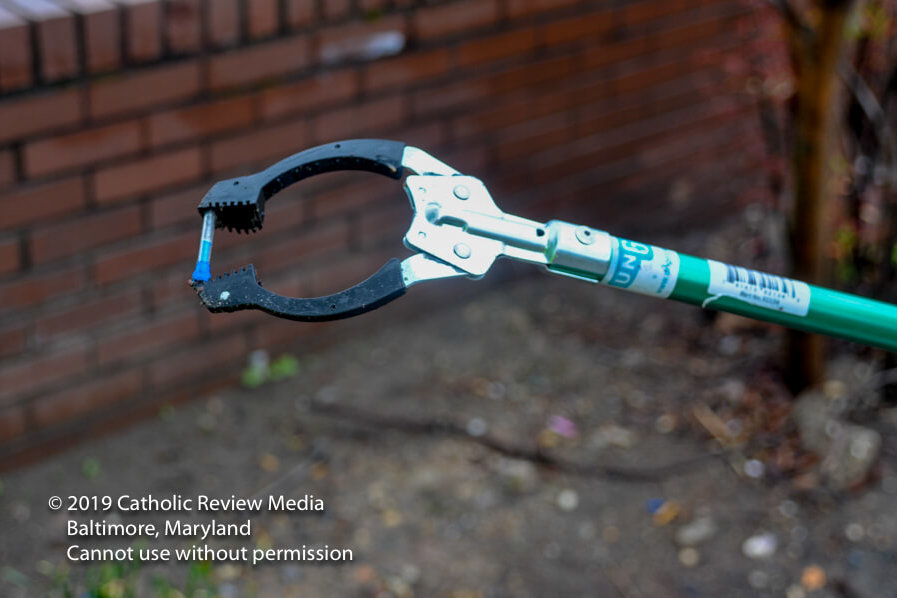 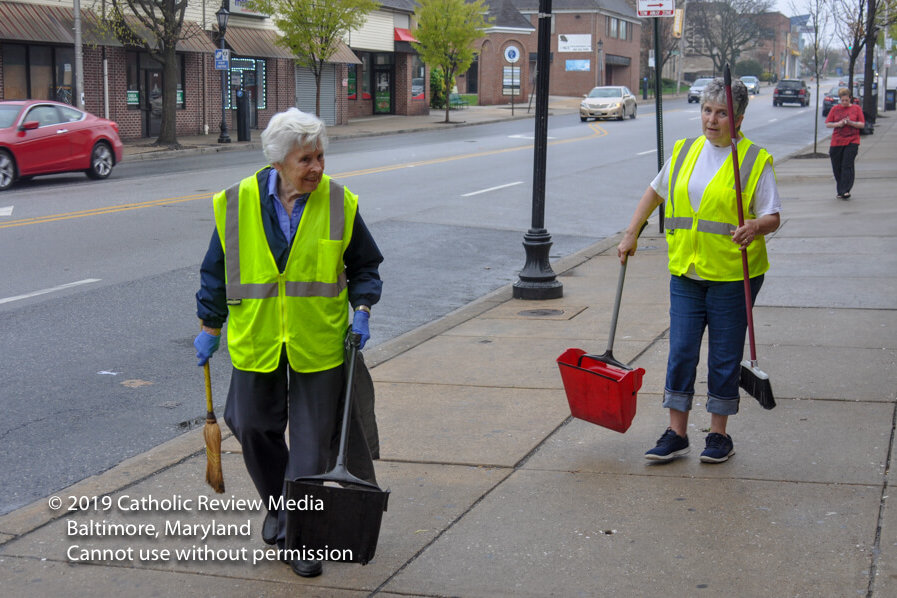 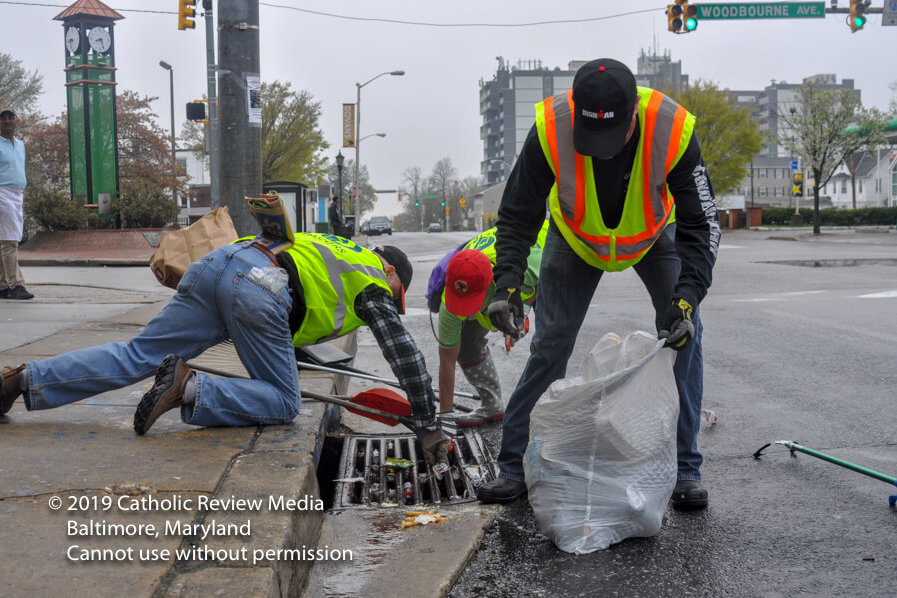 The Trash Bashers aren’t about “swooping in and out” just to make themselves feel better, according to Jessica Mendoza.

“We make friends and we’re present on York Road,” she explained.

I watched as a Trash Basher encouraged a man near a bus stop to consider becoming a worker in the city’s Safe Streets program. Another gave a resident information about clearing an alley. Several passersby thanked the Bashers for their service.

Donna Blackwell said the Bashers are working in an admittedly small way to make St. Mary a more viable part of the community.

“Every little bit we can do helps,” she said.

After the Bashers do their work, Bendann said, the streets sometimes stay clean for long stretches and sometimes they don’t.

The day after I visited the Bashers, I returned for a beautiful Palm Sunday Mass at St. Mary, part of my pastorate with St. Pius X in Rodgers Forge. On my way home, I made a point of examining the sidewalks along York Road.

The trash was back.

It’s encouraging to realize, however, that the Bashers will also be back – and they’re not about to give up on the city they love.

Lance Bendann was featured on the Catholic Baltimore radio program.  Listen to the full program below.