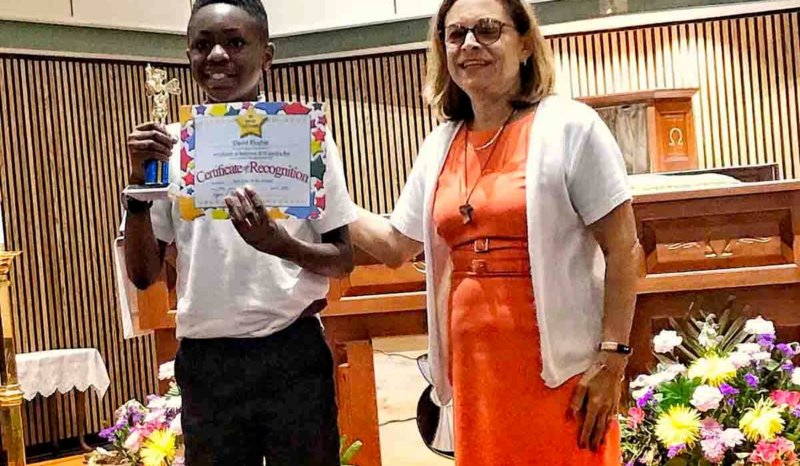 Here is a guest post from David Eluchie, a sixth-grade student at St. Joan of Arc School in Aberdeen, who won second place in the recent archdiocesan Spelling Bee.

My parents tell me that my journey into spelling started when I could barely speak. They tell me I would attempt to spell words like “pharmacy” and often ask questions like, “Why does pharmacy spell with ‘Ph” when it sounds like ‘F?’” They picked on my interests and started coaching me on phonetics and spelling. I also remember spelling words I see along the road during road trips. I would look at car license plates and attempt to spell the names of the states where they are registered. I guess spelling grew in me.

In fifth grade when I joined the spelling Bee contest, the words I was presented with at first were not challenging, but as the competition went on it became harder. Prior to the contest, I practiced frequently with my family and didn’t take anything for granted. My hard work paid off when I won the contest in my school and represented St. Joan of Arc School at the state level. I believe I must have been in the 10th position after the contest. My principal, teachers and entire school were proud of me and I was determined to make them even more proud in the next competition.

When I got into sixth grade, I entered the competition and won at the school level again. I knew I wasn’t as prepared as I wanted, hence, the night before the competition I was sick to my stomach. I probably used the bathroom about six times before daybreak. I was so conscious of my illness that I asked the judges what the rules were if I needed to use the bathroom during the competition.

The competition was attended by about 38 schools in the Archdiocese of Baltimore. I was very much at ease during the competition. My parents and Grandma were with me for moral support. The contest started and the words got harder as more contestants got knocked out of the contest. The contest must have lasted 4 hours, but it felt like forever, especially when we got to the final 3 contestants. It was intense. I took nothing for granted. I made sure I had the judges use every word thrown at me in a sentence and made sure they were defined. I would repeat the words and ask if that was the intended word. That strategy paid off. But at some point I was tired and the rest is history. I thought I could just leave after pictures, but then some woman came up to me and wanted to interview me. I looked up myself and I was on a website. At the bottom, it showed what I said. I was a little disappointed that I didn’t get $1,000, but at least I got a $50 Amazon gift card and a trophy. If I have an opportunity to join the contest again, I would get a coach and practice for much longer time on my feet. I believe if I build more stamina, I would have a better chance of  winning the next contest.