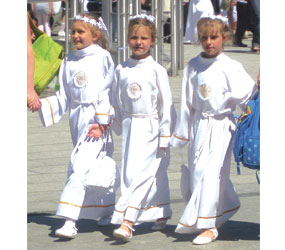 WADOWICE, Poland – As pealing bells signaled the start of Mass in this small Polish village, the Sunday morning congregation overflowed at the Basilica of the Presentation of the Blessed Virgin Mary.

With every pew filled on a warm May 29, latecomers of all ages stood respectfully at the back of church or huddled just outside open doors.

The outdoor worshipers sang traditional Polish folk hymns with the same gusto as their sheltered counterparts – joining in sweet melodies pushed into the streets by a pipe organ. Some knelt in silence on concrete and cobblestones, bowing their heads in prayer at the consecration.

A bright banner of the smiling pope hung at the basilica’s entrance. A bronze statue showed the Polish pontiff raising his hand in blessing, not far from the apartment building where he was born and the school where he was educated.

A bronze statue of Blessed John Paul II stands outside the Basilica of the Presentation of the Blessed Virgin Mary in Wadowice, Poland. (George P. Matysek Jr./CR Staff)

At the end of Mass, the faithful crowded in front of the altar to venerate a relic of the late pope – gently kissing the sacred object and making the Sign of the Cross. They later lingered in nearby cafes to enjoy cream cakes, the same treats famously relished by Blessed Pope John Paul II.

The Sunday scene of unabashed faith, family life and loyal church devotion isn’t that unusual in a small town like Wadowice. It is typical of the Polish countryside, where more than 60 percent of Catholics attend Mass every weekend and many families are active in the spiritual life, taking their children to confession and practicing traditional devotions, such as the rosary.

A visitor to a big city, however, finds something different afoot.

According to statistics reported by priests and confirmed by the Institute of Statistics of the Catholic Church, only about 20 percent of Catholics attend weekly Mass in metropolises like Krakow and Warsaw. Nationally, according to a 2009 institute survey, 41.5 percent of Poland’s Catholics attended Mass on the day of the survey. That’s down from 45 percent in 2005.

Poland’s Catholic Information Agency (KAI) reported last year that for the first time in years, the number of students in the country’s diocesan seminaries dipped below 4,000. Thirty-two fewer seminarians began their first year of formation in diocesan seminaries in 2009 as had in 2008. (By contrast, the U.S. Conference of Catholic Bishops reports 5,247 seminarians in the United States, which has a population eight times as large as Poland’s 38.1 million.)

There are also far fewer women joining religious communities. In 2009, a year when 28 convents closed, 300 women entered pre-novitiate programs – down from 723 a decade ago.

“Much, much more people used to go to church and attend Mass during the Communist time,” said Marta Reimfuss, a parishioner of Ss. Peter and Paul in Krakow and an English-speaking tour guide. “They were praying for independence – for freedom. I must admit that it’s changed because we have more and more freedom, so we can decide if we go to church or not.”

Compared to its European neighbors, Poland remains a deeply religious nation, with the Polish people ranking among the most church-going in the world. Yet, the Polish Church is facing a new challenge in the wake of the collapse of Communism: Western secularization.

Devotion and outside pressures

Pauline Father Simon Stefanowicz, a priest who serves at the Shrine of Our Lady of Czestochowa in southern Poland, said his much-loved shrine on “Jasna Gora” or “Bright Mountain” stands as a beacon of faith – even in the face of secularization.

The white-robed priest gave a personal tour of the shrine June 1 for Baltimore pilgrims who visited Eastern Europe on a pilgrimage led by Bishop Mitchell T. Rozanski in late May and early June.

“Pilgrims would like to experience something spiritual from their pilgrimage,” Father Stefanowicz said, “to see other people who pray and look to be happy – do some penance and practice confessions and Communion.”

Pauline Father Simon Stefanowicz explains the significance of the image of Our Lady of Czestochowa at the Polish shrine that houses the icon. (George P. Matysek Jr./CR Staff)

As he walked through the bustling shrine, the priest passed Polish children who had recently received their first holy Communion. They wore special white garments and said Marian prayers in front of the “Black Madonna” – the ancient icon of the Blessed Virgin Mary holding the Child Jesus. Hanging to the right of the icon was a stole ripped with bullet holes – worn by Blessed Pope John Paul II on the day he survived a 1981 assassination attempt.

While the shrine is a hub of Catholic spiritual devotion, the priest acknowledged that the Polish Church at large has faced increasing outside pressures.

“After freedom and democracy, over 300 sects moved into Poland and even satanic worshipers,” he explained. “(There were) bad and pornographic publications criticizing everybody and everything.”

Nationalized companies were sold to foreign owners who fired many Polish employees, he said, which led to high unemployment.

“Generally speaking, the Polish people after those changes began to believe newspapers, mass media and commercials as true advice for their common beliefs and some religious beliefs,” he said.

The European Union promoted permissiveness on issues such as sexual morality, he said, and downplayed or dismissed traditional values that had been the bedrock of Polish culture. Poles who had traveled to other EU nations were influenced by a pervasive Western secularism.

“The EU pressed to change our strict rules against abortion, euthanasia, birth control and same-sex marriages,” he said. “The propaganda is to make Poland modern like the western countries if you would like to be rich and prosperous. They do not mention the authority of Blessed John Paul II or Pope Benedict and their social teaching supporting family and marriage institutions.”

Magdalena Zowczak, professor at the Institute of Ethnology and Cultural Anthropology at the University of Warsaw, believes there has been a critical shift in the Polish Church since the fall of Communism.

The “Church of the People,” a national church that sheltered the democratic opposition and independent thought, has become the “Church of Choice” – an individualized faith community, she said. There’s now a “more reflective and critical attitude” toward religion, she said, which is no longer inherited in family, but consciously chosen.

During the Communist era, the Polish Church had great heroes such as Blessed Pope John Paul II, Cardinal Stefan Wyszynski and the martyred Blessed Jerzy Popieluszko – all of whom struggled for freedom.

In recent years, however, Zowczak said that “Many have been shocked because of information about the cooperation of some priests, who had enjoyed common social respect, with the Communist security service. … In the last decade, another kind of shock was caused by cases of (clergy) pedophilia.”

There were also uncertainties surrounding the restitution of church property, she said, and well-publicized cases of priests who left the church.

“This all strengthened anti-clerical sentiment and criticism of the clergy,” Zowczak explained.

Folk religiosity, preserved in the Communist period, “changed significantly under the influence of pop culture,” she said.

“Now, most of the (seminarians) come from cities and don’t know the religious tradition kept on the countryside,” she said, adding that rural youths aren’t as attracted to priestly vocations because they have “new opportunities” open to them.

Although Polish Catholicism has changed significantly in the last 30 years, Zowczak sees it continuing as a deeply engrained mark of the nation.

“Continuity can be seen mainly in older-age and socially marginalized groups who adhere to traditional national forms of religiosity,” she said. “These political forms of religion become more radical in response to liberals who attempt to stigmatize them.”

Marta Reimfuss, the tour guide, noted that priests in the villages continue to play a critical role in societal functioning.

“Priests in the villages have the most influence on people,” she explained. “It’s a person who can discuss many problems, many topics with people. We can see this in all the villages of a few thousand people. This is a very important role that priests are playing in our life.”

Walking the streets of Krakow not far from a church tower where a trumpeter hourly sounds a hymn to Mary called the “Hejnal,” Bishop Rozanski said he was impressed by the depth of faith of the Polish people.

Raised in a Polish family in East Baltimore, Bishop Rozanski has twice visited Poland and serves as the U.S. Conference of Catholic Bishops’ chairman in the ongoing ecumenical dialogue between the Roman Catholic Church and the breakaway Polish National Church.

“When the Nazis occupied Poland and then when the Communists came, the one thing that held the people and the culture together was the church,” he said, “so it’s ingrained in the ethos of the Polish people because the church helped them through the most difficult of times and was a clear voice for them.”

Faith is carried in the hearts of the Polish people, he said.

“Faith is not something that’s foreign or alien to them,” Bishop Rozanski said. “It is the people. It’s in the people.”

As in Blessed Pope John Paul II’s hometown, it is impossible to escape images of the much-loved pontiff elsewhere in Poland.

In Krakow, where he had been archbishop, St. Florian Church erected a shrine to the newly beatified pope that showcases an oil painting portraying him as he looked as a young curate assigned to the parish. Papal statues and banners can be found in big cities and small towns, and there’s even a memorial plaque high in the Tatra Mountains, where the pope loved to ski as a young man.

St. Florian Church in Krakow includes a shrine to the newly beatified Blessed John Paul II that portrays the pope as he looked when he was a young curate assigned to the parish. (George P. Matysek Jr./CR Staff)

Just as the pope helped inspire the Solidarity movement and emboldened the faith of the Polish people with his call to “be not afraid,” he continues to inspire today. Father Stefanowicz said that’s especially true for young people. They give the priest hope for the future.

“Many young people come to the church and to the sacraments,” he said. “They like to participate in walking pilgrimages and all kind of religious retreats and spiritual oases following the example of Blessed John Paul II.”

The Catholic Church has been a fixture in Poland since 966, Father Stefanowicz said, producing more than 156 saints and blesseds. It’s not going away.

“We are and will continue to be victorious in Christian tradition and heritage,” he said.

Click here for George Matysek’s video reports on Our Lady of Czestochowa, the Trumpeter of Krakow, devotion to Blessed Pope John Paul II and more.

Senior Writer George P. Matysek Jr. accompanied Bishop Mitchell T. Rozanski on a pilgrimage to the Czech Republic, Poland and Hungary May 23-June 2. This is the second of two reports on the pilgrimage.