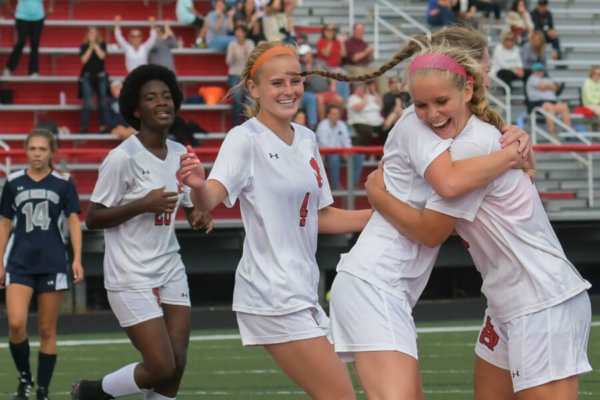 SEVERN – The girls’ soccer team from Archbishop Spalding High School began its Interscholastic Athletic Association of Maryland A Conference schedule in the same fashion it ended 2016, with a hard-fought victory over rival Notre Dame Preparatory.

The Cavaliers posted a 1-0 home victory over the Blazers Sept. 12. The game’s only goal came five minutes into the second half, when Jenna Snead converted off of a corner kick from classmate Kaitlyn Keaton.

“I’m glad I was in the right place at the right time,” Snead said, of a sequence that was set up by a run from Abby Hanks. “We did really good work by winning the corner.”

Spalding, ranked No. 1 by the Sun and Varsity Sports Network, needed a penalty kick shootout to beat NDP in last year’s A Conference championship game.

The Cavaliers improved to 4-0-1 overall.

“Capitalizing on key moments, continuing to be resilient around the goal, it’s something we focus on, and we did that,” Spalding coach Ashly Kennedy said. “I believe in this group, and I believed in us scoring a goal. That belief stayed … we came through.”

The opening 20 minutes delivered few scoring chances. In the 32nd minute, NDP goalkeeper Gabie Christy was required to make one of her seven saves. The most notable came when she made a diving stop of a penalty kick by Hanks, which kept Spalding from icing the outcome.

“I kind of knew which way she was going to go,” Christy said, of a club teammate.

NDP, which dropped to 0-2-1 overall, played a number of ninth-graders.

“The younger players saw what it’s going to take, Christy said. “I think they’ll step up.”