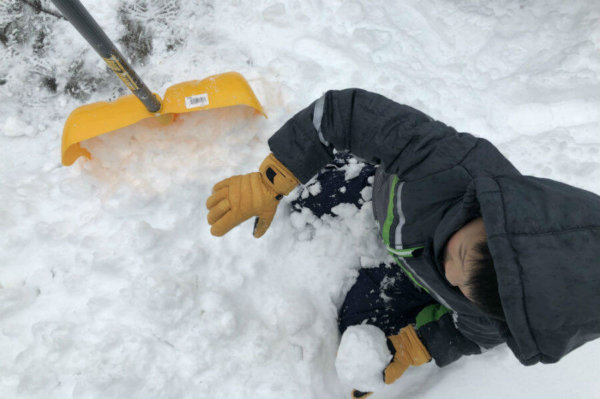 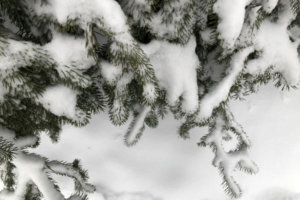 You have to love a snow day that falls on a Wednesday. I mean, you don’t have to, but I enjoyed having a day off in the middle of the week.

We had pancakes for breakfast because we had time and nowhere to go. In a moment of parental frustration, I banned video games early in the day, which meant that everyone played outside for hours and hours. They would come in, warm up, climb back into their snow clothes, and head back outside. They even did some shoveling and some playing when they could have been shoveling.

I made chicken noodle soup for lunch, baked brownies, made an unpopular dinner, and did a little work while the shoveling team cleaned off the cars. For the record, a car that is covered in salt spray gets just as covered as a car that hasn’t been salted at all.

By now almost all of the snow has melted away. It’s almost as if it never happened. But the snow day memories live on. 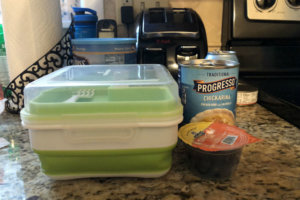 On one of the rare mornings this week when our children did go to school I got up and found that our older son had already filled the boys’ water bottles for school, put most of his lunch together, and picked out his can of soup for breakfast. Why do I have the feeling that soon I’ll just be rolling out of bed and out the door?

Fifth graders are amazing. I can hardly keep up with him.

This morning I was invited to speak about our younger son’s IEP at an interprofessional conference for graduate students—I think in speech and psychology. When my colleague who was organizing it invited me, she said all she needed me to do was share our personal story. That sounded easy. Then when we started, I realized that the other mother on the parent panel had a full PowerPoint presentation with photos of her son and a list of what she wanted to cover.

At first I felt a little inadequate, as if I had forgotten to do my homework. But I had prepared, and I had fun just speaking and trying to connect with the audience. They were really engaged, asking lots of questions. So I feel sure it was fine. Does everything in life have to be multimedia? 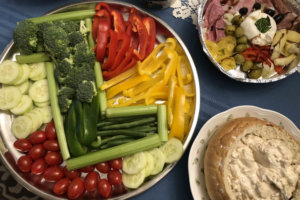 Our nephew who turned 10 this past week was in town last weekend, and he wanted to go to a Loyola Greyhounds basketball game to celebrate. He is a big fan, even though his family lives hours away from Baltimore. I love that, of course.

I offered to have him and his guests back to our house for a small gathering afterward. And, because I just had to, I made an L-shaped veggie tray. Making veggie trays might be almost as much fun as going to basketball games. But the most fun of all was celebrating our nephew’s birthday. 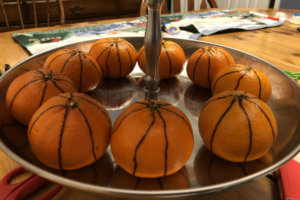 I had imagined I might make a cake that looked like a basketball court with the birthday boy’s head on a basketball player figure heading toward a hoop, but…my more practical side won over that morning when I looked at the clock and realized I had limited time and no idea what I would use for hoops. So I made it a big 10 on a tower, covered it with chocolate frosting and some M&Ms, and called it a day.

My husband and I were talking about possible trips to take this summer, and we started a list. When I looked at it, I realized all of them are within driving distance, and many are day trips. Somehow that gets me even more excited about the possibility of squeezing in a few. It’s not as if we wrote, “Japan…Greece…Timbuktu…Madagascar.” We wrote things like, “Horseshoe Curve…Hudson River Valley…Gettysburg.”

Now we just have to start planning. Maybe I should assign that task to a fifth grader. 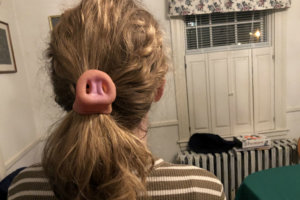 We will celebrate our final Chinese New Year gathering of the Year of the Pig tomorrow when we meet with friends for a Chinese lunch. I can’t wait. Last weekend my sister Maureen and her children were in town, and I handed out a few leftover pig items. My 15-year-old niece modeled her pig nose as only she could, displaying it on her ponytail.

I was never that classy at 15.