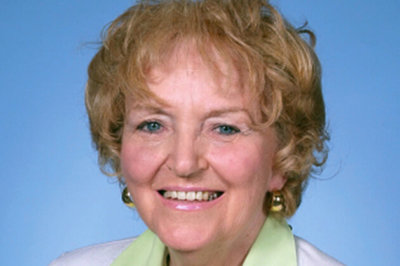 A funeral Mass for Sister Mary Sharon Burns was to be offered Nov. 8 at Stella Maris Chapel in Timonium. A Religious Sister of Mercy who served in both hospice ministry and as the head of the theology department at what is now Loyola University Maryland in Baltimore, Sister Sharon died Nov. 2 at Stella Maris Hospice, at age 91.

According to an obituary prepared by Religious Sister of Mercy Irene Callahan, Sister Sharon was a native of Wilkes Barre, Pa., where her religious instruction was provided by Holy Cross sisters. Her discernment included research into more than 100 orders of religious women; she visited eight, the last being the Sisters of Mercy, who, she humorously recalled, “were the only ones who fed me.” She entered their community in Mount Washington in 1946.

Sister Sharon earned a bachelor’s degree in education from the former Mount St. Agnes College; a master’s in theology from the University of Notre Dame in South Bend, Ind.; and her PhD in religion from The Catholic University of America in Washington, D.C. Her extensive travels included to Israel, and her work included Judeo-Christian unification groups.

“She was highly knowledgeable about the Holocaust,” Sister Irene wrote, “and frequently spoke about it to students and other groups and organizations, providing not just factual and historical information, but also unpacking its meaning from various perspectives.”

Sister Sharon taught at the lower school at Mount St. Agnes, and served as both a teacher and principal at a school in Alabama and the former Little Flower School in Woodstock. She became an associate professor at Mount St. Agnes College. When it merged in 1968 with what was then Loyola College, she retained that position, then became the first woman and the first non-Jesuit to head its theology department. Her gifts included playing the lead in the college’s 1985 staging of the Broadway musical, “Hello, Dolly.”

In 1983, she began a second career in pastoral ministry at Stella Maris Hospice, where she eventually became chaplain. After her retirement in 2008, Sister Sharon continued to volunteer at Mercy Medical Center and at The Villa, her order’s retirement home, where she moved in 2016.

Her survivors include two sisters, Religious Sister of Mercy Marie Yolanda Burns of Baltimore; and Geraldine Petrone of Middleborough, Mass.