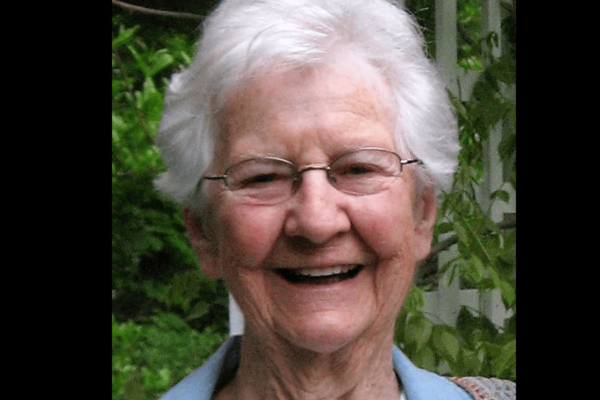 A funeral Mass was offered for Mission Helper of the Sacred Heart Sister Joanne Frey Aug. 30 at the Mission Helper Center in Towson. She died Aug. 27 at Stella Maris in Timonium after serving 72 years as a Mission Helper.

Sister Joanne, who spent eight years as the president of the Mission Help Community (1972-80), would have turned 100 in October.

“My time as president was one of real transition – a transition necessitated by Vatican II, which asked us to be aware of the signs of the time and to be sensitive to what was happening in the world,” Sister Joanne said in a 2015 reflection gathered by her order. “And, we were asked to see what our place was in this world.”

Part of the process included an administration comprised of sisters in varying ministry roles, such as Sister Joanne. Among her many duties in the time of change was, along with her fellow administrators, to visit all of the sisters on their missions, what Sister Joanne called “the most impressive thing of my years in office.”

Sister Joanne worked in the Archdiocese of Washington with Monsignor James Gillen from 1960-70. When President John F. Kennedy and his wife, Jackie, sought religious education for their daughter, Caroline, Monsignor Gillen suggested Sister Joanne. Sister Joanne served as a catechist, teaching Caroline and a group of children of White House staffers at Visitation Academy in Georgetown.

Sister Joanne’s ministry took her from Texas, where she taught migrant workers and their children; up and down the East Coast, where she taught scholars and seminarians; to Virginia, South Carolina, Pennsylvania and Massachusetts, where she spent two decades as a pastoral associate at St. Bernard Parish in Newton.

“These were most fulfilling years,” Sister Joanne recalled in a 2006 interview, where she reflected on 60 years as a woman religious. “I was encouraged to minister according to my heart’s desires, so I was very much involved with parents and the teaching of their children, as well as preparing couples for marriage and parents for the baptism of their children.”

A native of Clarksburg, W.Va., Sister Joanne earned a bachelor’s degree in sociology and a master’s degree in religious education from The Catholic University of America. She entered the Mission Helpers in 1946.