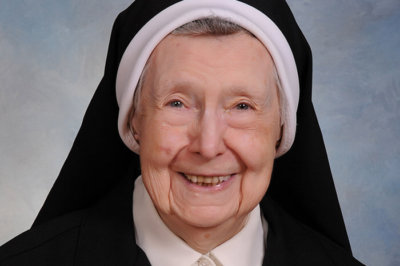 Sister Ann Joseph Hartman was a professed member of the Sisters of St. Francis of Philadelphia for 78 years. She died Nov. 12 at age 99.

A funeral Mass was offered Nov. 20 at Assisi House in Aston, Pa., for Sister Ann Joseph Hartman. A professed member of the Sisters of St. Francis of Philadelphia for 78 years, Sister Ann Joseph died Nov. 12 at age 99.

A native of Philadelphia, Sister Ann Joseph professed her first vows in 1941, earned a bachelor’s degree in nursing from Villanova University and ministered primarily in healthcare and education. In 1952, she became nursing supervisor St. Joseph Hospital in Baltimore. In 1965, Sister Ann Joseph helped coordinate its move from the original hospital location to its new facility, what is now University of Maryland St. Joseph Medical Center, where she continued to serve until 1977.

Sister Ann Joseph ministered for 43 years in the Diocese of Trenton at St. Francis Medical Center. In 2016 she moved to congregation’s retirement residence in Aston where she served in prayer and hospitality ministry until her death.