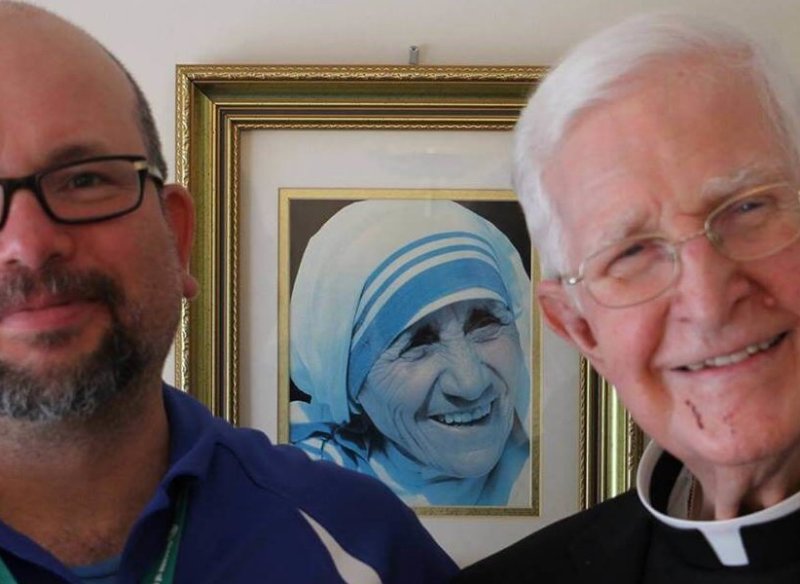 The passing of Bishop Emeritus William G. Curlin last Dec. 23, deeply saddened me, and made me reflect on the impact this saintly bishop had in my life.

I had the honor and privilege to be a seminarian for the Diocese of Charlotte from 1998 until the spring of 2002, during Bishop Curlin’s last four years as Bishop of Charlotte. As a seminarian, I had many opportunities to interact with him, and also met one on one with him on several occasions to discuss my discernment process and seminary progress. Prior to becoming a seminarian, I had a few opportunities to catch a glimpse of a man I am convinced was a living saint.

My father passed away back in 1988, when I was 24. As I looked back in my interactions with Bishop Curlin, I now realize that he was, in many ways, like a second father to me.

I remember the very first time I met him. It was at St. Patrick’s Cathedral in Charlotte for the Solemnity of the Immaculate Conception, Dec. 8, 1995. Bishop Curlin was the main celebrant, and I recalled his homily really resonated in my heart — he preached on Our Lady’s total surrender to God’s will, and of course he threw in a couple of Mother Teresa’s anecdotes. I wasn’t really practicing my faith at the time, and his homily made me take a hard look at my spiritual journey. After the Mass, I thanked him for celebrating Mass for my girlfriend at the time and me. He was very gracious and promised to pray for me and the young lady I was dating.

Three weeks later I had a conversion experience while on vacation in Florida. I came back to the faith with a force the following year. I broke up with my girlfriend and started discerning a priestly vocation. Although I considered joining a couple religious orders, a local diocesan priest who mentored me at the time suggested I spoke with Bishop Curlin. I met with the bishop and I mentioned to him that I was considering joining the Vincentian priests. He responded, “The Vincentians were founded by St. Vincent de Paul; The Diocese of Charlotte was founded by Jesus Christ!”

The fall of 1998, I joined the seminary program and was sent to St. Vincent de Paul Seminary in Latrobe. Although I discerned not to continue my seminary studies, I met with Bishop Curlin and thanked him for the spiritual and academic formation I received while in seminary. I told him that I wanted to get married and start a family. He told me that for me to find the right woman, she had to be a woman I was willing to lay down my life and die for.

Three years later, I did get married and my wife and I had a lovely daughter, who is 12-years-old now.

After Bishop Curlin retired, I would occasionally bump into him around town. I remember about four years ago, I ran into him at the grocery store and I helped him “U-Scaned” a birthday cake he was struggling to ring up. Bishop thanked me and asked what I was up to at the time. I told him that I was applying for a job with the Catholic News Herald, but I hadn’t heard back from them yet. He thanked me again for my help and then told me, “I will offer my Mass for you tomorrow.”

Three weeks later, the Catholic News Herald editor called me and offered me the job.

As a reporter for CNH, I had several opportunities to interview Bishop Curlin, but the last time I did have a chance to chat with him remains very special. Sue Ann Howell, CNH senior reporter, and I were asking him about his long-time friendship with now St. Teresa of Kolkata. He shared with us that Mother Teresa loved ice cream. When I asked him what she would say to him when he makes it to Heaven, he quipped, “Let’s have some ice cream,” he said laughing. “I like ice cream too!”

Prior to coming to the Catholic Review as a bilingual staff writer in December 2017, Rico worked as the Hispanic communications reporter for the Catholic News Herald, the newspaper for the Diocese of Charlotte, NC., from September 2013 until May 2017.

Prior to his post with the Catholic News Herald, Rico ran his own Spanish interpreting company in the Charlotte area, as well as working as a freelance writer for a local Charlotte weekly newspaper.