An Abundance of Family 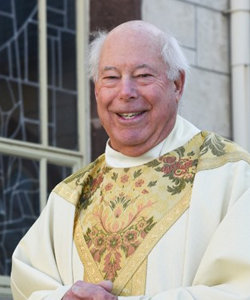 Reverend Monsignor Richard Tillman has proven you can go home again. Ordained in 1965, he retired after 33 years as Pastor of St. John the Evangelist, Columbia, and now resides in the rectory of his boyhood parish, Church of the Immaculate Conception, Towson.

Since his retirement in 2010, he has played an active role in parish life. He says, “Some people remark, ‘You don’t look retired. You’re saying mass, doing confessions, visiting the sick and incarcerated, and doing all kinds of things for the parish.’ I appreciate that. I want to be involved.” The oldest of five boys, he always found the priesthood to be a comfortable fit. He says, “There is a fraternity. Having grown up with four brothers, I was predisposed to finding real respect and devotion to other men in service and ministry.”

When he takes a break from his work at Immaculate Conception, Monsignor Tillman enjoys fishing and golfing. He also visits Canaan Valley, West Virginia, every July for a family get-together with his brothers.

In looking back on his priesthood, Monsignor Tillman values the many friendships he has formed with his parishioners. “I think what makes a parish priest or a diocesan priest is his relationship with the parish,” he says. “I still hold the people of St. John’s dear to me, as well as those of Immaculate Conception.”