A Call To Serve That Endures 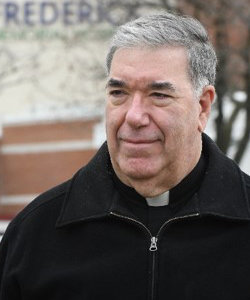 When Reverend Monsignor Richard Murphy reflects on his many years as a priest, it with a sense of gratitude. He says, “I’m thankful for the ability to share in the healing ministry of the Lord and that He has allowed me to do it for so long.” Ordained in 1973, Monsignor Murphy retired as Pastor of St. Timothy, Walkersville in 2016, but continues to work tirelessly.

He tells of how when he retired, people told him he could now do what he wanted. He response was he was retiring from being a pastor, not the priesthood. He explains, “The priesthood is not about doing what you want when you want. It’s about serving the Lord.” Monsignor Murphy saw his retirement as a new phase in ministry, one he approached with excitement.

It would be an understatement to say Monsignor Murphy is active in his retirement. He assists in hospital ministry two days a week at Frederick Memorial Hospital and helps with Masses at various parishes near Frederick. Now residing in Homewood Retirement Center in Frederick, Monsignor Murphy manages to find time for himself. He enjoys Homewood’s Tuesday night bridge club, gardens, and does a great deal of traveling. He says, “I now pray for balance… how to not overextend. I don’t want to burn out, but I don’t want to rust out either.”