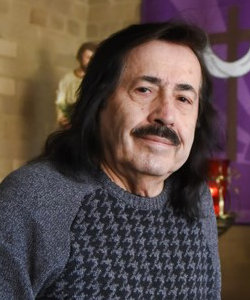 Ordained in the Diocese of Trenton in 1961, Reverend Salvatore Livigni joined our Archdiocese in 1992. After retiring at 71, he worked for six years as the Archdiocese’s Director of Pastoral Services for Retired Priests, while residing in St. Michael the Archangel, Overlea.

During that time, Father Livigni appreciated being part of parish life at St. Michael’s. He says, “I believe living among people who are young and old gives me energy. That’s why I’ve stayed in the parish.”

He has never really retired from parish ministry, celebrating Mass regularly in the morning and often hearing confessions. He also practices active ministry in the hospitals, visiting the sick of the parish. He is currently living at Mercy Ridge where he continues to be available to the Archdiocese of Baltimore parishes, helping out celebrating the Sacraments.

For entertainment, Father Livigni enjoys going to the movies and the occasional baseball game, and he is not shy about admitting to being a Yankees fan.

Father Livigni recounts that his years in the priesthood have given him great satisfaction in being able to connect with people. “My ministry to people is very important,” he says. “It’s being with people where they’re at and being the vehicle to help bring them closer to the Lord. That has been a great joy.”