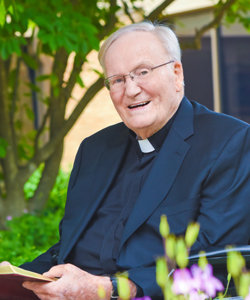 When you meet Reverend Monsignor John Auer, you are immediately struck by the aura of kindness and holiness that surrounds this priest of more than 50 years. Throughout his many years of ministry, he always had one unwavering mission – to help people. His compassion consistently shines through.

Msgr. Auer’s path to the priesthood was different than that of many of the priests in our archdiocese. After graduating from Mt. St. Joseph’s High School, he attended Johns Hopkins University, where he was enrolled in the pre-med program. However, prior to graduating, he had a change of heart and decided he would minister to people in a different way. He entered the seminary.

Ordained in 1957, Msgr. Auer began his priesthood at St. Jane Frances de Chantal, Riviera Beach. Following this, he spent five years in Peru and Ecuador as part of the St. James Missionary Society. One of his major accomplishments while working in Ecuador was his involvement with the formation of a credit union in a poor town where the citizens had no place to safely save their money. To this day, the credit union thrives, an achievement that Msgr. Auer continues to take great pride in.

When he returned to the United States in 1967, Msgr. Auer was assigned to Our Lady of Perpetual Help, Woodlawn until 1970 when he was sent to Holy Trinity, Glen Burnie, as a Co-Pastor. After the formation of four new parishes in Glen Burnie, Monsignor Auer remained the Pastor of Holy Trinity where he helped to convert the old convent into a day care center and a parish center.

In 1985, he was reassigned to St. Brigid, Canton, until 1989 when he became pastor of Our Lady of the Fields, Millersville, where he assisted in building a parish center to fill the need for religious education, classrooms and offices for the parish.

Throughout his career, Msgr. Auer was always very forward thinking. He established a children’s liturgy long before they became popular. And when some parishioners complained that teenagers were coming to Mass in shorts, he responded, “I understand how you feel. But I’m here to tell you that I’m just grateful that somebody who can drive a car, comes to Mass on their own, no matter what they wear.”

For Monsignor John Auer, life has been filled with many interesting things to do. His hobbies have included golfing, skiing, and travelling. At 50, he decided to take up painting. Ultimately, watercolors became his favorite medium. Yet, though he is a man with many interests, the Church was always his first love.

When Msgr. Auer retired in 2002, he took up residence at St. John the Evangelist, Severna Park. For him, retirement was not a time to sit back and relax. Rather, his ministry continued with vigor. He spent the next 13 years of his life saying morning mass on a daily basis, as well as weekend masses. He also served parishioners by performing many weddings and hearing confessions regularly.

After 13 years at St. John the Evangelist, Msgr. Auer moved to St. Martin’s Home in Catonsville. There, in the loving hands of the Little Sisters of the Poor, he receives the kind of care and compassion that he generously bestowed on his parishioners for so many decades.