Retired from the Navy, Deacon William Keown is excited about new role as priest 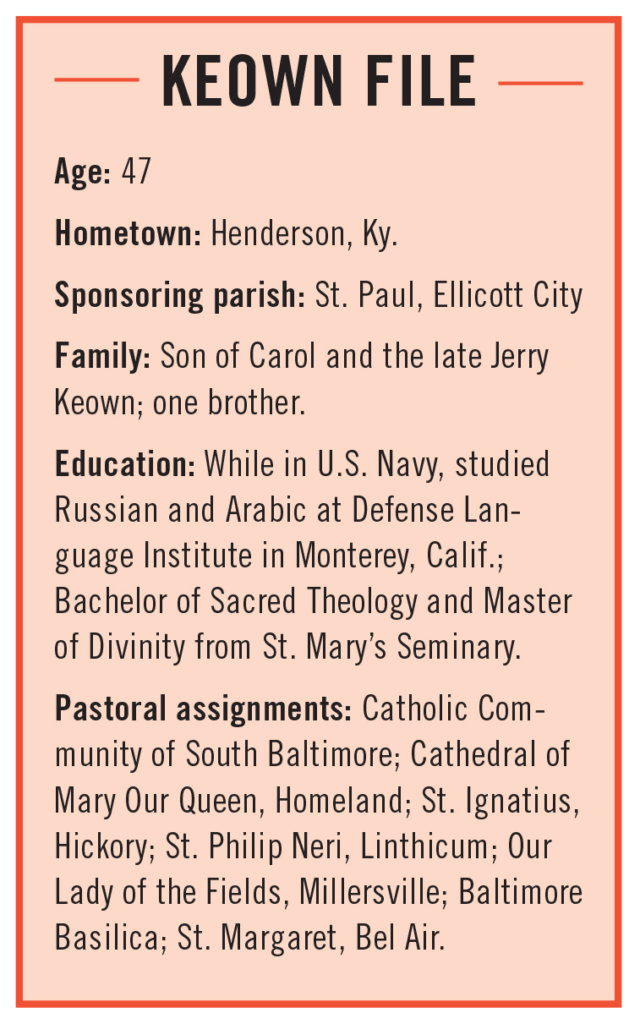 Transitional Deacon William Keown never anticipated having a second career, let alone one as a priest of the Archdiocese of Baltimore.

Retiring from the U.S. Navy in 2009 after 20 years of service that included a tour in Bahrain and concluded at Fort Meade, Deacon Keown (pronounced COW-in) had a short, simple bucket list: Relocate to Costa Rica and scuba dive – every day.

“The two things I did not want to  do again,” Deacon Keown said, “were wear a uniform and take orders.”

During his formation for the priesthood, however, he found a fraternity similar to the one he experienced as a chief petty officer, on land, aboard aircraft carriers and submarines, and aloft in ES-3A and EP-3A aircraft.

“No matter where you go in the Navy, you are part of a universal culture,” Deacon Keown said. “Chiefs (CPOs) see you in that uniform and accept you as a brother. The same can be said for being a seminarian. People know you’re serving the church, and accept you as part of the family.”

He describes himself as “the last guy that should be a priest,” perhaps because he has been Catholic less than a decade.

“I would read Scripture on my own,” he said of his time in the Navy, “but you can’t really sustain a faith like that.”

The conversion of a Navy buddy piqued Deacon Keown’s interest, which led to him entering the Catholic Church at the 2009 Easter Vigil, at St. John the Evangelist in Columbia.

He was a civilian and nearing a degree in psychology at UMBC when a homily on vocations from Father Matthew Buening, then pastor of St. Paul in Ellicott City, hit home.

“I had considered the priesthood, but it seemed like a solitary, lonely life,” Deacon Keown said. “When I went to greet Father Matt after Mass, he was shaking hands with parishioners and hugging kids and babies. He had this joy in his priesthood. He radiates it.”

Father Buening’s spirit and steady hand were vital after Deacon Keown had doubts as a new seminarian.

The death of a young boy who had been anointed by Father Buening shook Deacon Keown, as did changing the linens and clothing of an AIDS patient at the East Baltimore hospice sponsored by the Missionaries of Charity.

“I love my nieces, but I never once changed their diapers,” Deacon Keown said. “Now I’m cleaning up strangers. Mother Teresa talks about doing those tasks with joy. I was not, and felt terrible about it.”

Father Buening reminded him that “You gave comfort to someone who needed it.” He added, “This too shall pass,” and Deacon Keown stuck out his first semester at seminary.

“Part of Bill’s issue is that he had already spent so much time in classrooms,” said Father Buening, now the chaplain at Towson University. “No one has a vocation to seminary. We have vocations to serve, and Bill has a love to   serve. When he couldn’t do that, he got frustrated.”

Deacon Keown confronted his fear of helping the sick during a pastoral assignment with Father Patrick Carrion at the Catholic Community of South Baltimore.

He was tempered by encounters at Mercy Medical Center and the Shock Trauma Center at the University of Maryland Medical Center – all while his father was dying from lung cancer in 2013 – to the point where Deacon Keown said that hospital ministry became “my strongest area of formation.”

His gifts include fluency in multiple languages and a unique perspective on the universal church.

“One of the things I like about the Mass, you know exactly what’s going to happen,” Deacon Keown said. “You can be anywhere in the world on a Sunday, and even if the language is different, you know what’s going on with the Mass.”

There is also the discipline he brings to the priesthood.

“Twenty years of military, it’s almost as if I was preparing for it,” Deacon Keown said.

Archbishop William E. Lori will celebrate the ordination Mass at 10 a.m., June 23, at the Cathedral of Mary Our Queen in Baltimore. All are invited.