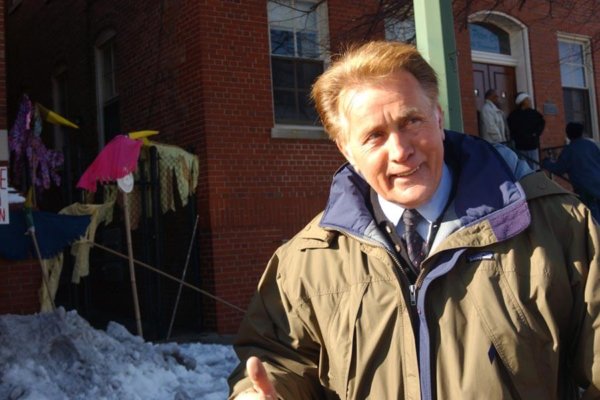 The congregation that packed St. Peter Claver Church for Philip Berrigan’s funeral Dec. 9 slowly made its way onto the ice-covered streets of West Baltimore when I spotted the president of the United States standing outside the 114-year-old brick building.

President Josiah Bartlett, that is, portrayed by Martin Sheen on “The West Wing.”

The star of the popular NBC series traveled from California to attend the funeral of Mr. Berrigan, a former Josephite priest best known for torching draft notices in the 1960s and taking a hammer to war planes in his later years.

Mr. Sheen had befriended the controversial peace activist in 1981 when he played the part of a judge involved in a case against Mr. Berrigan in the movie, “In the King of Prussia.”

As The Catholic Review reporter assigned to cover the funeral, I jumped at the chance to get a few quick quotes from Mr. Sheen. Gently nudging my way through the crowd, I stepped up and asked the 62-year-old Ohio native for a few thoughts about Mr. Berrigan’s radical activism and its impact on Catholics.

The actor nodded quickly, but said that he had to “say goodbye first.” With that, he tracked down Elizabeth McAlister, Mr. Berrigan’s widow. Saying only a few words, he looked deeply into the former nun’s eyes, embraced her and began walking away. But then, his attention returned to me.

“I need to get to the cemetery,” the actor said, flashing his familiar, craggy smile. “Can I bum a ride?”

We walked two blocks to my car, parked alongside boarded-up rowhomes.

After hurriedly turning off the conservative talk station that was tuned into my car radio, I found myself chauffeuring the famously leftist Mr. Sheen to St. Peter Cemetery — my tape recorder rolling all the way as I gained insights into Mr. Sheen’s brand of Catholic social activism.

Mr. Sheen said he had been away from the Catholic Church for a long time. When he returned, it was Mr. Berrigan and others like him who played a key role in awakening a passion for living the faith.

“He brought me to the radical church, to the church of the non-violent Jesus, the church of Mother Teresa and all the heroes and martyrs,” said Mr. Sheen, pulling on a cigarette along the way.

“Then the last 21 years have been the happiest and, by far, the most difficult of my life because they demanded action of conscience which is what the whole Gospel is about and that’s what Phil was all about,” he added.

Mr. Sheen has used his Hollywood bully pulpit to speak out on behalf of environmental, anti-war, anti-death penalty and other progressive causes. He’s been arrested several times for his acts of civil disobedience.

It is his Catholic faith that compels him to take action, Mr. Sheen insisted.

“Phil taught me that if we don’t take the Gospel personal, then it’s impersonal and it has no meaning,” he said. “It’s got to cost you something. If it doesn’t cost you something, you have to question its value.”

Mr. Sheen said the time has come for Americans to turn their backs on war.

“What a time, huh?” Mr. Sheen said. “With what we’re faced with, with this lunacy — with this addiction to war we have in this country, this pseudo-Christian culture we have doesn’t want to have any part of the non-violent Jesus. We’re commanded by the Scripture to love our enemies and we’re forbidden to go to war.”

By then, we had reached the cemetery. Mr. Sheen smiled and thanked me for the ride. Repeating a joke he’s probably heard far too many times, I responded that it wasn’t every day that I got to drive the president. He laughed graciously, shook my hand heartily through the open car window and was gone.

Before he went, he had one quick word of advice. Keep the newspaper focused on the Gospel, he said. For in the end, promoting and enacting Gospel values is what it’s really all about.