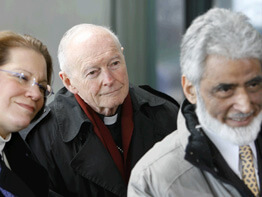 WASHINGTON – After meeting with U.S. Secretary of State Condoleezza Rice Jan. 29, a delegation of U.S. Christian, Jewish and Muslim leaders said they think the United States should take a more vigorous leadership role in promoting a comprehensive peace in the Middle East.

Cardinal Theodore E. McCarrick, retired archbishop of Washington, said the group met with Rice “to reiterate our strong commitment to a two-state solution of the Israeli-Palestinian conflict” and to discuss “the urgent need for United States leadership to restart and successfully conclude negotiations for a lasting and just peace between Israel and the Palestinian people.”

Cardinal McCarrick, who led off a press briefing afterward outside the Department of State, said the meeting was “substantive and excellent.”

“But the real measure of the success of our meeting can only be taken in the coming weeks and months as actions and events unfold,” he added.

The religious leaders belong to the National Interreligious Leadership Initiative for Peace in the Middle East, a coalition of 35 leaders of national religious bodies or organizations that was formed in 2003 to press for a more constructive and comprehensive U.S. approach to Arab-Israeli-Palestinian peace.

“First, as Americans, we ask for bold, persistent United States leadership for peace in the Middle East, leadership that supports and challenges both Israelis and Palestinians,” he said, adding that this means ongoing, active high-level U.S. engagement “that holds both sides accountable in a step-by-step peace process.”

“Second, as religious leaders in the Jewish, Christian and Muslim traditions, we committed ourselves to continuing to say tough things to our communities here and in the (Middle East) region to build up public support for peace,” he said. “We know that these are difficult but necessary steps on the road to a two-state solution, and we pledge to build public support for them.”

Along with Cardinal McCarrick, in the delegation were Presiding Bishop Mark Hanson of the Evangelical Lutheran Church in America; Presiding Bishop Katharine Jefferts Schori of the U.S. Episcopal Church; Rabbi Paul Menitoff, former executive vice president of the Central Conference of American Rabbis; Rabbi Amy Small, past president of the Reconstructionist Rabbinical Association; and Sayyid M. Syeed, former secretary-general of the Islamic Society of North America, who recently left that post to become founding national director of the society’s new Office of Interfaith and Community Alliances.

Stephen M. Colecchi, director of the U.S. bishops’ Office of International Justice and Peace, who attended the meeting as a staff aide to Cardinal McCarrick, told Catholic News Service that the group had expected the entire session to last about 45 minutes, with Rice attending for about 30. Instead, they met with her for more than 45 minutes, he said, and after she left they continued meeting about 40 minutes more with the undersecretary of state for political affairs, R. Nicholas Burns.

“The leadership of the United States is going to be necessary,” Rabbi Menitoff said, “not only to get the parties to the table, but to get the concessions necessary on both sides so that an agreement can be reached.”

Referring to Ms. Rice’s recent trip to the Middle East, Bishop Hanson said, “We think the foundation she has laid needs to be built upon” with a sustained U.S. presence in diplomatic initiatives there.

Cardinal McCarrick said, “We all share the hope that what our government is doing now will be sustained, that the ‘road map’ that was initiated three or four years ago will again be put on the front burner.”

Mr. Syeed said American Muslims are also very concerned about what is happening in Iraq and Afghanistan, “but we believe that the issue of Palestine is critical; that’s why we’re here.”

Of the need for interreligious efforts for peace, Cardinal McCarrick said, “We are all children of Abraham, and in that family relationship that we have, we come together with great confidence that God will listen to our prayers and our hopes, and that if we all work together, if we all are willing to make the sacrifices when necessary, that peace can come.”

The meeting with Ms. Rice was the result of a joint statement the interreligious leadership initiative issued last December outlining in detail what role and initiatives the group thought the United States must take to restart the peace process and assure that it moves forward.

In addition to Cardinal McCarrick, two other Catholic leaders signed the joint statement: Cardinal William H. Keeler of Baltimore, who has played a leading role in Catholic-Jewish and Catholic-Muslim relations, and Bishop William S. Skylstad of Spokane, Wash., president of the U.S. Conference of Catholic Bishops.

In conjunction with the issuance of the joint statement the group wrote to Rice, requesting a meeting to discuss the urgency of the issue and the importance of sustained U.S. leadership in the peace process.