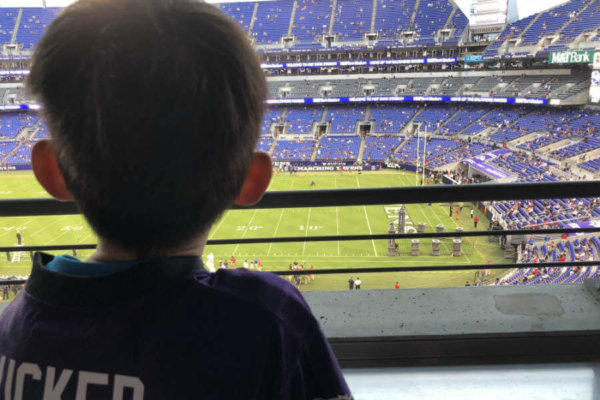 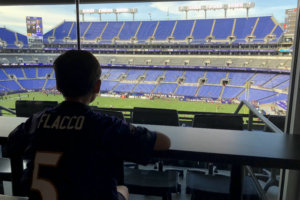 When you’re counting down to an event, it seems to take forever to get there. And then all of a sudden, it’s time! And you’re there! And it’s all happening in a wonderful rush.

That’s how it felt to me when we went to the Ravens game last week.

If you missed my post last week, our younger son had made a Gotcha Day wish that I shared on Instagram—not thinking anything would come of it—and then his wish came true in an astounding way.

Suddenly, thanks to my friend Sharon Markley and her friend Paul Tiburzi, we had four tickets to watch the Ravens-Redskins preseason game from DLA Piper’s suite at M&T Bank Stadium. 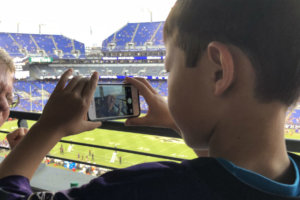 Every day I told our sons how many days it would be to go to the game—and, though time may have moved slowly for them, it seemed to speed by for me.

After a quick tour of their new classrooms for the year on Thursday, there we were in our car, heading to the stadium with their dad.

We found parking and headed to the stadium—and to the suite. Every single person we encountered along the way was full of smiles. I had told the boys which suite we were headed to, and they ran down the hallway to get to the door, arriving there at the same moment as a smiling lady who was delivering hot dogs to the very suite we were going to be enjoying.

Life really can’t get better than that. Except it did. 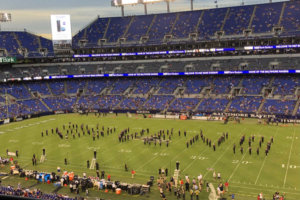 Inside the suite, our host for the evening, Jeff, greeted us warmly. He knew all about our son’s wish, and he wanted to make sure every possible wish in the moment was met. But he had nothing to worry about. Within moments, our 8-year-old had discovered the popcorn and Coke. He was over the moon.

None of us had been to a Ravens game before, and we were in awe of the view of the stadium. We had arrived early so we could find parking and enjoy the suite. And it was an absolute thrill.

That was before the pre-game started. I have watched football on TV, but I had no idea how much energy and entertainment is involved in seeing a game in person—and we had a great view. The Ravens Marching Band took the field, playing and moving in shapes and patterns and spelling out “R-A-V-E-N-S.” 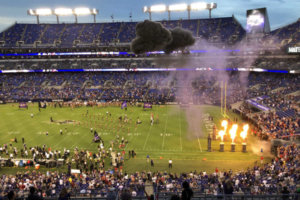 After that, we saw all this purple smoke shooting up as a group of people ran onto the field flying flags. Then, as the players came onto the field, fireworks exploded and what our older son describes as “flame bursts” shot from raven-shaped flamethrowers on the top of these pillars. (If that’s not entirely accurate, it’s because I was completely astonished when it was unfolding, and I am relying on my sons’ descriptions, which are surely better than mine.)

We stood to honor a group of Vietnam War veterans who marched in. The National Anthem gets me every time it is played when I am with our sons. But it was especially poignant to hear it sung so powerfully by a Persian War veteran at a time when we are reflecting on how our younger son joined our family. When we touched down on American soil seven years ago today, he became a U.S. citizen. And I remember how my eyes filled with tears with relief and gratitude. That flight home from China with a toddler is not for the feeble.

Our evening at the game couldn’t have been more fun. The action on the field was amazing, and our new friends in the suite were incredibly friendly and kind to our children. 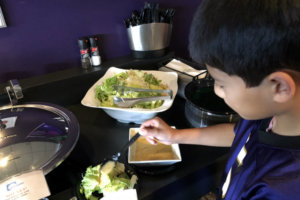 No one ever complained that our sons polished off most of a Caesar salad that was probably designed to serve 40, ate all the olives and red onions off a 7-layer dip, consumed more chicken tenders than most elementary school cafeterias go through in a day, and drank so much Coca-Cola that our gracious host sent for more.

The game was an exciting one, and we had the best time cheering on the Ravens. The evening flew by too quickly, in fact, and we realized we needed to get the children home and to bed.

After thank yous and a few final photos, we headed out. But as we passed the concierge, our little guy noticed the bowls of candy on the desk! The boys stopped for a few pieces, and I realized yet again that we will never be able to top this experience. 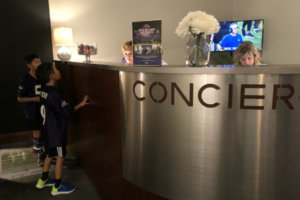 Then we walked down the ramp, enjoying the views of the city and the joy of a fun walk. As we walked to our car, I said to our Gotcha Day boy, who was walking next to me, holding my hand, “So what was the best part?”

He thought for a minute.

Mission accomplished. Gotcha Day celebrated. Memory of a lifetime made.

We are so very grateful.