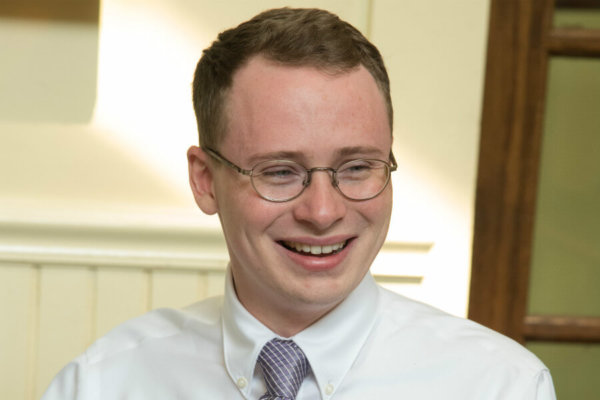 I first met Tommy O’Donnell a few years ago when he was a student at Loyola University Maryland, where I work. At the time we were both parishioners at St. Mark’s in Catonsville, and we talked about living in Catonsville and being Catholic.

Our paths crossed again this summer when the Baltimore Frassati Fellowship asked me to speak at one of their events, and it turned out Tommy was one of the leaders there. When I asked Tommy what he was up to these days, he said he was preparing to enter the seminary in August. We didn’t have time to talk then about how he came to take that step.

But this week is National Vocations Awareness Week, so I reached out to Tommy, who is studying at Mount St. Mary’s Seminary in Emmitsburg, Md., to ask him whether he would answer a few questions. I’m so grateful he was willing to share a little of his story.

Tell me a little about your background. Where did you grow up and go to school?

I grew up in Catonsville, the oldest of three children, and with a large extended family throughout Baltimore. I attended Saint Mark School, Mount St. Joseph High School, and Loyola University Maryland. After college, I worked for a little less than two years in the Pro-Life office of the United States Conference of Catholic Bishops. 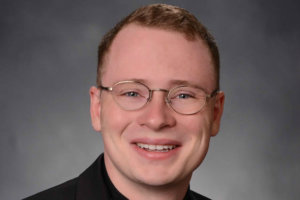 What does the word “vocation” mean to you personally?

When I was growing up, I definitely thought that “vocation” meant “vocation to the priesthood” and that I didn’t have one! I eventually came to realize that marriage was a vocation, too—and I assumed that was my vocation. I thought of marriage as the way that a man and a woman bring each other, and their children, to heaven. That’s true for all vocations: they are each the unique way that God calls a person to follow him into his Kingdom. But even beyond that, the lifelong commitment to a vocation doesn’t just bring a person to God; it brings God to the world.

When did you first consider being a priest?

I did not consider becoming a priest until after I had graduated high school. I was at the funeral of my former high school English teacher and mentor, Brother James Kelly, CFX. The homilist (who also happened to be my pastor) told the standing-room-only congregation at the Cathedral of Mary Our Queen that Brother James would want men to follow in his footsteps, not necessarily as Xaverian brothers, but in any form of religious or priestly vocation. I realized for the first time that might be me.

How did you discern your vocation to the priesthood?

At first, very reluctantly. I was willing to give God anything except being a priest! Eventually I came to realize that the call wasn’t going away. A few things came together in my life: I started making time for daily Mass (still not every day, but much more often), I learned more about the history of the Church and the lives of key saints, and I met some seminarians who inspired me to be a better Christian. I also learned to enjoy prayer, which is not something that comes naturally to most of us—it is like exercise. I was very blessed to spend a semester in Rome, but discernment like this can happen anywhere. And it wasn’t in Rome that I came to accept the call. It was finally back in Baltimore, in a chapel where I had gone often to pray. For a few months, I seriously pursued a priestly vocation in the context of religious life, with the Jesuits. The spirituality of Ignatius is a very powerful tool for discernment and helped lead me to the diocesan priesthood which I am studying for today.

What would you say to a young man in high school or college who is thinking about becoming a priest—or maybe hasn’t even considered it at all?

I’m no expert! But I’d say that the main step is to accept the call to live a Christian life—to live your baptismal promises—in full. That’s what every young man needs to do, even if he has no plans of becoming a priest. Avoid your phone/Internet and enjoy the outdoors. Spend more time with your family and with the poor. Try to live more simply and justly. Go to confession and Eucharistic adoration often. Pray the rosary and trust in Mary. Most importantly, find at least 10 minutes a day to be in silence (preferably more), talking with God. Offer him your whole life, and ask him what he is calling you to do. Being willing to give up everything to follow Jesus is the only way to be fulfilled in this life, no matter your age or vocation. 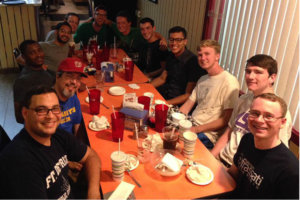 What is it like to be a seminarian? What do you do every day?

One of my brother seminarians with a little more experience than me has pointed out that we are fundamentally trying to live the Christian life, in a community of 145 other men who are striving to do the same. Much of our day is spent with our coursework in philosophy and theology. There is also a lot of time of prayer: we go to Mass every day, pray the Liturgy of the Hours, and make a Holy Hour—an hour of time spent in personal prayer with Jesus in the Eucharist. We also have time to eat meals together, to work out and to play sports, and to share our talents—especially the men who can sing or play instruments. Most men have apostolates, serving in hospitals, nursing homes, schools, parishes. I’ve only just started, but as a seminarian enters into theology studies more deeply, he also has more classes on the practical elements of being a priest (understanding parish finances, how to do a baptism, living out a life of celibacy, how to say Mass, etc.).

When you told your family you felt this was your calling, how did they respond? What about your friends?

I have had great support from both my family and my friends. Some people are supportive primarily because they see that I am happy as I pursue this vocation. Then there are some who certainly want me to be happy—but they also are very glad to have another priestly vocation! They know that not only will I be fulfilled by living out my vocation, but that by my vocation the world will be brought a little closer to fulfillment in Christ.

This week we are praying for vocations and for those studying to be priests. How can we pray for seminarians? Are there specific needs that we could incorporate in our prayers?

Pray that we remain faithful to our studies and our prayer. Most importantly, just pray that we become holy! Although we will not take religious vows, we are still called, like all people who are baptized, to live out poverty, chastity, and obedience, and we will make promises along those lines on the day of our ordination.

Is there a question you would like to answer that I haven’t asked?

Can I recommend some books? I’ve only recently read Story of a Soul (the Autobiography of St. Thérèse) and I wish I’d read it much earlier. Everyone should read it. When it comes to books on priestly vocation, I love the short book Gift and Mystery by St. John Paul II.

Please join me this week in praying for Tommy, all those preparing for the priesthood, and those discerning a vocation. Learn more about vocations in the Archdiocese of Baltimore here.

The photo at the top was taken by D McQuade Studios. The other two are from the Archdiocese of Baltimore Vocations Office.