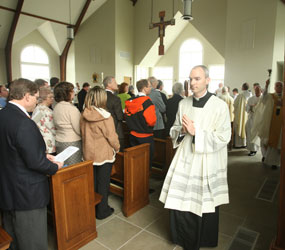 Pope Benedict XVI recognized the stellar ministry of three priests of the Archdiocese of Baltimore by conferring the title “monsignor” on two of them and raising a previously named monsignor to the highest rank of monsignor.

Monsignor Arthur Bastress, longtime pastor of St. Alphonsus in Baltimore, was named protonotary apostolic supernumery – one of just two monsignors in the Baltimore archdiocese to attain the highest ranking of monsignor. Monsignor Robert Armstrong, retired rector of the Cathedral of Mary Our Queen in Homeland also has this honor.

Archbishop Edwin F. O’Brien surprised each of the honorees by personally informing them of the pope’s recognition Oct. 22-23.

The monsignors, whose title is conferred by the Holy See to honor priests or indicate the importance of their assignment, will be recognized during a 4 p.m. prayer service at the Cathedral of Mary Our Queen in Homeland Nov. 20. Other papal honorees will also be recognized at that time.

Monsignor Bastress heard about his honor when Archbishop O’Brien visited St. Alphonsus after the 8:30 a.m. Mass Oct. 23. The 84-year-old pastor, the oldest active pastor in the archdiocese, became emotional at the archbishop’s generosity.

“There are very few times I’ve been speechless,” Monsignor Bastress said, “but that was one of them. I was flustered. I’m having a hard time having it register.”

After his ordination in 1951, Monsignor Bastress served as associate pastor of St. Dominic in Hamilton and St. Patrick in Cumberland. He moved on to Holy Trinity Parish in Glen Burnie, and also served as temporary administrator of St. Andrew by the Bay, Annapolis, and St. Mary’s, Pylesville. He was appointed pastor of Immaculate Heart of Mary in Baynesville in 1970.

“God’s been good to me,” Monsignor Bastress said. “The people have been very good and understanding of me. I have no plans for retirement, unless the new archbishop thinks I’ve had enough.”

Monsignor Adam Parker received word of his monsignor title while attending the Oct. 22 education gala at the Baltimore Convention Center. In addressing the audience, Archbishop O’Brien noted that the archdiocese is known for its devoted priests and its faithful people. He then broke from his script.

“And speaking of our devoted priests,” Archbishop O’Brien said, “there is one who continues to serve me and this archdiocese from my very beginning here. One who represents the virtues and dedication of this presbyterate to a tee and one whom I am pleased to call with Pope Benedict’s blessing ‘Monsignor’ Adam Parker.”

Monsignor Parker, who became the archbishop’s priest-secretary in 2007, called the announcement a “huge surprise.”

“I was thrilled that my parents happened to be there,” he said, “along with one of my sisters.”

Meeting Pope Benedict XVI on several occasions has been one of the highlights of Monsignor Parker’s service to the archbishop, the new monsignor said.

“Another highlight has been traveling throughout the archdiocese,” Monsignor Parker said. “I’ve been to most every parish. It has been great to get to know the people and experience the wide variety of cultures and liturgical experiences of our archdiocese.”

Monsignor Parker, at 39, the youngest monsignor of the archdiocese, will accompany Archbishop O’Brien to Rome as the archbishop takes on his new role as pro-grand master of the Equestrian Order (Knights) of the Holy Sepulcher of Jerusalem.

Ordained in 2000, Monsignor Parker was associate pastor of St. Peter in Westernport and at St. Gabriel in Barton. He was assigned to Church of the Ascension in 2005.

Monsignor Hilgartner was at dinner Oct. 23 when he received a phone call from Archbishop O’Brien, who had been trying to reach the 43-year-old priest all day.

When the archbishop said that the priest was now a monsignor, it was a surprise.

The priest believes the recognition comes largely because of his tenure as executive director of the U.S. Conference of Catholic Bishops’ divine worship office.

“I’m just doing what I’m asked,” a humble Monsignor Hilgartner said. “I’m grateful my work has been seen as effective. It’s been exciting to watch it all happen.”

Ordained in 1995, Monsignor Hilgartner was associate pastor of St. John the Evangelist in Severna Park and the Cathedral of Mary Our Queen in Homeland. He credits the then-pastors of each parish, Monsignor Edward F. Staub and Monsignor Armstrong, as showing him how to be a devoted priest.

“Those kinds of role models, alongside other co-workers, staff and people of the parish, offer a great example of faith,” Monsignor Hilgartner said.

He pursued graduate studies in Rome before coming back to the archdiocese to serve as campus minister to Mount St. Mary’s University in Emmitsburg.

Known for his liturgical expertise, Monsignor Hilgartner was tapped by the USSCB for his missal role in 2007.

After getting the news, Monsignor Hilgartner said, he “went to bed knowing God has a plan for me. I couldn’t have foreseen this. It’s been my love working with the liturgy.”