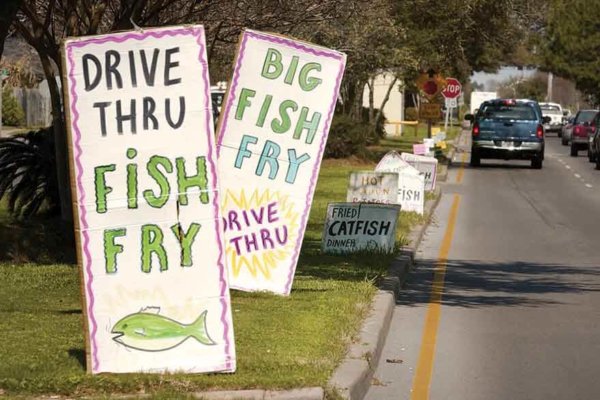 The fish fry has become a savory staple of parish fellowship during Lent. In New Orleans, several parishes vary their menus each Friday, with such offerings as shrimp and okra, blackened catfish, shrimp and grits, shrimp pasta Alfredo, crab and corn bisque, and, for the healthy eater, even grilled redfish. (CNS photo/Frank J. Methe, Clarion Herald)

When I lived in the Southwest, a priest friend once mentioned that he loved Lent when he was growing up.

For Fridays in Lent, his mother would make quesadillas – cheese crisps. “I love quesadillas,” he said. Lenten Fridays were no sacrifice for him as a kid.

When I was growing up, we often had fish sticks, which I liked. Even more often, we had what we not-so-affectionately called “pea toast.” It was tuna, cream of mushroom soup and peas – tons of peas. All of this was ladled over toast. I didn’t mind tuna but did not like it hot. And I was/am not a fan of either peas or mushrooms. But eat it we did.

“You don’t have to like it; you just have to eat it,” was Mom’s saying – for everything she served at home.

Over the years, I have gotten a bit better about what I eat. I’ve expanded the number of vegetables I enjoy, and, especially when travelling, like to experiment with different foods. I still have trouble with certain food textures, and some things I just plain don’t like. That’s from whence comes the old saying, “There’s no disputing about tastes.”

So, when Lent comes, I think about my mom, who departed from this life 14 years ago, just a week before her 78th birthday. I know that cooking and preparing meals for us 10 kids was a challenge, especially since we had such varying tastes and sometimes gave her a hard time. I recall one brother repeating, almost chant-like, “I hate lima beans, I hate lima beans.” I agreed, but we had to eat them anyway.

We also often give up certain foods – chocolate or sweets – or certain habits for Lent. Some people love Brussels sprouts; not me. I’m always willing to give them up, but what kind of sacrifice is that?

We look at Lent from a perspective of deprivation. We fast on Ash Wednesday and Good Friday and abstain from meat on the other Fridays of the season, but it’s not much of a sacrifice to splurge on lobster instead of beef as a Lenten meal.

A lot of our parishes host fish frys during Lent to provide an opportunity for people to participate together in abstinence and Catholic practice. Many parishes also offer simple suppers of soup and bread, not always on Fridays, combined with a spiritual talk or Stations of the Cross. At these kinds of events, the sacrifice of giving up meat or eating a simple meal is enhanced by the communal nature.

That’s the essence of the annual Rice Bowl campaign sponsored by Baltimore-based Catholic Relief Services. The campaign asks Catholics to eat a simple, meatless meal on Fridays in Lent and contribute the savings from a more lavish meal to CRS for its use lifting up those who are impoverished around the world.

Participants are given a cardboard bank in the shape of a bowl to symbolize the hardships that many who are hungry experience, with only a bowl of rice to sustain them.

As with many things these days, there’s an app for that. Via your smart phone, CRS provides meatless recipes, daily prayers, stories of those who are affected and helped through the world, and a way to donate.

I don’t mind making some sacrifices during Lent to remind me how blessed I am and to help others.

A matter of taste: One writer’s deep dive into fast-food fish sandwiches