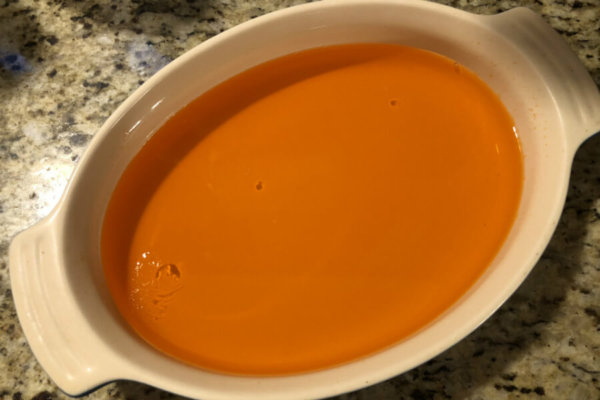 A long weekend is the perfect time to dig through the pantry to find canned goods you can pass along—you know, like the two boxes of orange Jell-O that have been sitting on a shelf for months.

I’m never sure why we have Jell-O on hand. Maybe if we were a household where people were often having their tonsils removed, it would make sense. But I never think to make Jell-O because…well…it’s Jell-O. Jell-O isn’t eel sushi or fried cockroaches for me. It’s certainly edible, and I know there are many people who like it. I just would not seek it out.

And, in this moment, I didn’t hesitate. I dropped the Jell-O into our bag of foods to give away.

Minutes later, though, our second grader came bouncing into the room, spotted the Jell-O, and pulled it out of the bag.

I can say no to this child—truly, I can—but not over such a simple request.

So I boiled the water, stirred the powder in, and put the dish in the refrigerator for a few hours. When it was ready, I called Daniel to the kitchen.

He proudly carried the whole tray of Jell-O to the table, stuck his finger into it, and declared that he had “dibsed” it—as in “I have dibs on that,” but with a different approach to the grammar. I noticed that no one argued with him or asked him to share.

Then he filled a plate with Jell-O and sat and ate it, happy as can be.

I don’t know what this week has in store for you. But I hope that at least some part of it brings as much pleasure as a serving of orange Jell-O brought our son.