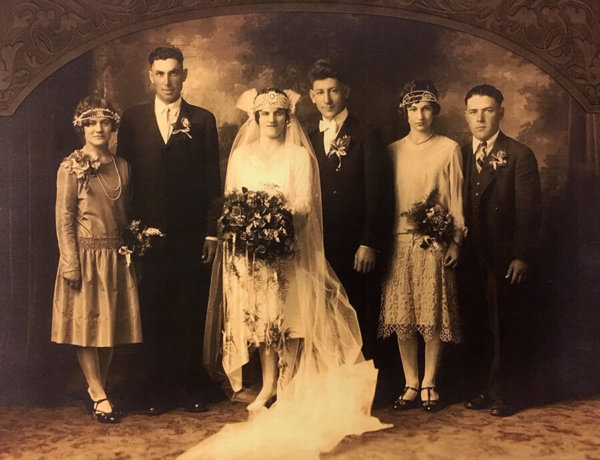 During a visit with my Aunt Beda (pronounced bay-du) after she moved into her new apartment the summer of 2017, I stumbled upon photo albums that introduced to me my German heritage.

I had appreciated my family background growing up, though never to the extent that was about to be revealed.

Beda was the first born of Norberta and Franz Hack, the eldest of three siblings, who include my mother, Norberta, and Uncle Maurus. My aunt’s failing health created a sense of urgency, to detail what family history she could remember before all was lost. I was a kid when my grandparents died in the 1970s.

In 1935 and 1938, when my aunt was 5- and 7-years-old, respectively, she accompanied my grandparents on the only visits they made to their homeland.

Unbeknownst to one another, Norberta (nee Strobel) and Franz immigrated to the U.S. two years apart – both aboard the S.S. Muenchen – through Ellis Island in New York harbor after WWI.

According to facts and family lore, Grandmom was 21 and a “nurse” from a “well-off” family in Beuron, not far from the Swiss border. Grandpop was 25, and from a farming family in Fürth, near Nuremberg. Both came to this country unable to speak English.

Gaps in their story including why they came, where and how they met, and married, remains a bit of a mystery.

The couple eventually settled at 7205 Belair Road, a brick house just south of St. Michael the Archangel in Overlea, where the family attended school and Mass.

As we turned the pages of the albums, black and white photos of my great-grandparents, aunts, uncles and distant cousins were introduced. Beda’s recollection was remarkable.

We came upon a photo of Sister of Sorrowful Mother M. Beda Hack, my grandfather’s sister and my aunt’s namesake, whom I had never previously heard about. Beda said that she thought her aunt came from Germany to the religious community in Wisconsin. On a whim, I contacted the order.

Their archivist not only confirmed what my aunt said, she sent me a photo, cemetery location in Oshkosh and a detailed obituary.

The albums also contained postcards and letters from relatives in Germany with addresses where my grandmother had lived in the Baltimore area before she married. The postcards were of typical pleasantries. I need to translate a lengthy letter, which could reveal unknown family history.

The manifest of the S.S. Muenchen, found online through the Ellis Island Immigration Museum, listed the names of my grandparents and the particulars of their arrival here. My grandmother’s destination was listed as the School Sisters of Notre Dame convent on Aisquith Street.

School Sister Joan Minella suggests that her order may have sponsored my grandmother’s immigration.

In the back pockets of the photo albums are my grandmother’s visa and my grandfather’s German Empire WWI record. The visa revealed a picture of a stoic young woman about to traverse the Atlantic for parts unknown.

Beda told me my grandfather’s hearing loss was due to a mortar blast while serving in the war. Could his military service record confirm her story? It’s fair to say my grandfather was lucky to survive the war.

I continued to find bits of family history in my aunt’s belongings, including an envelope labeled “German War Money.” Could this be payment for his military service? Did the government make reparations to their citizens to help rebuild the county following the war?

A photo of my aunt and two cousins standing under small swastika flags caught me off guard. “What is this?” I asked. Such pictures were common at the time.

While she could not remember the particulars, Beda did recount a story from her trip to Germany in 1938, where she received a severe scolding from my great-grandfather for making the Nazi salute. She didn’t know any better. Beda also pondered if our family tree might include some Jewish ancestors.

Aunt Beda agreed, that she and her parents were fortunate to visit Germany before the unthinkable acts of WWII unfolded. It was the last such trip.

My mother died in 2005. Aunt Beda passed away this past March, leaving my Uncle Maurus in Georgia as the surviving member of the first-generation Americans in my family.

To my amazement, I’ve been able to locate German relatives and look forward to tracing my family roots further.

This journey into one family’s American dream began with a visit to an ailing aunt.

It’s unfortunate that it took so long to begin to discover a part of our family heritage.

Our story isn’t unique, but having the ability to see, touch and pass along such a legacy is priceless.