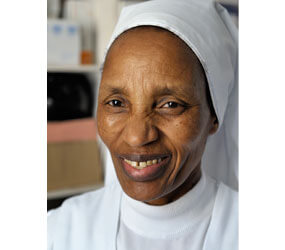 BENGHAZI, Libya – A Catholic nun working in rebel-held eastern Libya says she and other sisters have remained because of their commitment to the people they serve.

“This is our first experience of being in a war, and we’re sad to see the people dying, especially the youth who are offering themselves for freedom and for the future of this country. But it’s our duty to be here, no matter how much life has changed,” said Sister Priscilla Isidore, a member of the Sisters of Charity of the Immaculate Conception of Ivrea.

Sister Isidore, a Tanzanian, has lived in Libya for 16 years and works as a nurse in the city’s 7th October Hospital.

When the uprising against Libyan strongman Moammar Gadhafi broke out in February, Benghazi was the scene of violent clashes. Press accounts claim more than 200 people were killed in the city in the first few days as security forces cracked down on anti-Gadhafi demonstrations. Yet after a week, the city was largely in the hands of the opposition, and since then has been the headquarters of the National Transitional Council, the de facto government of Gadhafi’s opponents. Sporadic episodes of violence still occur, however.

Sister Isidore, 56, said 24 nuns remain in eastern Libya, working in Benghazi, al-Marj, al-Bayda, Derna and Tobruk. Three other sisters left the country in response to the fighting, she said.

“Because the Lord is our hope, we will continue with our work among the sick and injured people here and, if necessary, to die with them. That’s our mission. That’s why Christ sent us here,” she said.

Libya is a Muslim country, with Christianity restricted mostly to enclaves of foreign workers, many of whom have been evacuated from the country. Sister Isidore said she has had no problem with the country’s Muslims.

“People love us so much. This year, our congregation has been here for 100 years. We have a strong history of love, unity and communion with the people. So the people love us, because they see that the sisters are here for God and love everybody. They call us mothers, and we call them our children, brothers and sisters. They respect us. They see we didn’t come here for other interests, only to work for God and the people. So they love us and we have no problems staying amidst them,” she said.

Sister Isidore said she is inspired by the devotion of those around her.

“We hope this situation won’t be for nothing, but will be for good, that it will be better in the country. We pray that God will again give us peace,” she said.