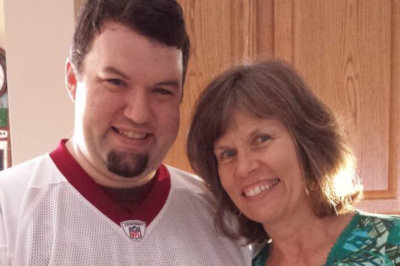 I see the bench from the road. “My” bench. No one is sitting there, thankfully. I drive on ahead, through the cemetery gate, make a left toward my son’s final resting place, and park in the circle. No one is nearby. No one alive, that is, except me.

I grab my notebook, pen and cup of coffee, just purchased from “Bean Rush Café,” and leave my car. I notice cars parked near the memorial chapel yonder. Another funeral today. My heart sighs.

I approach “my” bench, where I place the coffee, notebook and pen down, then go over to Nick. His ashes are in the bottom row of the columbarium, which has four columns of twenty-two spaces across. Nick is in the middle, 11th from the left. His name “DELANEY, NICHOLAS” on his tombstone strikes at my heart every time. I still don’t understand. He’s my son, and he had just celebrated his 34th birthday Dec. 29, 2015. Twenty-one days later, he was found unresponsive on the floor. Gone in the middle of the night. In the middle of his life. Cause of death was a heart arrhythmia, the coroner said. Just like that: his life ended.

We are prepared for becoming parents with prenatal vitamins, birthing classes, doctor visits, baby showers and advice (wanted or not!) from other parents. Having a baby changes one’s life for the better. There is no preparation for suddenly losing a child. I say it’s not normal. Not the norm. No wonder I feel lost and abandoned. An orphan is someone whose parents have both died. There is no single word for a parent who loses a child. “Bereaved parent” doesn’t come close to describing the heartbreak and emptiness.

So, instead of planning Nick’s wedding, going to his next show, playing board games or cracking silly jokes with him, I kneel at his resting place, and pat the stone only to hear the hollow reply from within. Or, was that my heart? I cry a little less each time. They say it is the “new normal,” but I say that there is nothing normal about visiting my child in a cemetery.

I hear “Taps” playing on a lone soldier’s bugle near the chapel in the distance. I stand up at attention out of respect, with hand over my heart. Hopefully the newly deceased person lived a long life, and no mother is attending her child’s funeral today.

I head back to the bench to take another sip of coffee. It has turned cold. That, more frequently now, reflects my “new normal.”

So, where is God in all of this? I feel that my whole faith journey of 61 years had been formed so that I could one day deal with Nick’s passing. And, that’s what Nick did. He passed into God’s arms, out of my arms. I once cradled and rocked him, and later would drop just about any project I was working on to be with him. I remember late night conversations, when Nick was in high school. I would be exhausted at 11 p.m., ready to flop into bed. That’s when Nick would want to talk, so we spent many nights eating cheese and crackers and talking into the next day’s early morning hours. I’m learning to not dismiss the seemingly trivial moments of life. As Chris Rice sings, “[Lord,] teach me the power of the moment.”

I would advise us all to cherish time spent with a spouse, children, parents, friends. Most of all, stay close to Jesus and Mary. I feel that I’ve been “pretty good” about keeping close to Jesus in prayer, off and on over the years, ever since I was a teenager. With Nick being gone, I feel both abandoned by God and somehow closer than ever to Him.

The day after Nick left us, I was sobbing uncontrollably, pacing the floor alone in my living room, when my husband was out. I screamed at God, saying, “How could you take my son? My son!! Why did you take him from me???!!!”

My heart was quiet for a short moment, when I felt God reply, “I know, I know. I lost my son, too.”

This didn’t give me any answer to “why?” but it made me think, “Why not?” Why not me? Why not Nick? Why not our family? Why should we be spared the suffering that so many others experience? I may never have a lasting or satisfying answer, but I do strongly believe that God understands, that Jesus will always be beside me to accompany me. And, although I did not have a strong devotion to the Blessed Mother before, this has helped me to grow closer to her. She certainly is the one who understands the emptiness I feel. I pray for her intercession more often now. And, as a deacon told me when I talked to him about my grief, we now have someone in heaven who is probably always praying for my husband and me: our dear son Nick.

Christina M. Delaney is a parishioner of Holy Family in Davidsonville, where she leads Bible study groups. She is also involved in the Cursillo Movement of the Baltimore Secretariat.