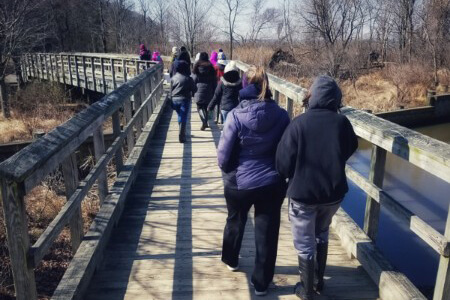 Back in the fall, I wrote about the St. Joan of Arc School teachers’ retreat at a beautiful outdoor education facility called North Bay, in Cecil County. I returned in the Spring with my 6th grade class. I was there for one day, while my students spent an entire week eating, sleeping and learning there. I held a North Bay essay contest for my 6th grade class and, though every essay was a work of art, I thought  this one really captured the layers and depth of personal growth that occurred for many of my students at North Bay. Thank you Bria Huff-Cranshaw for sharing your experience with us!

When I arrived at North Bay, I was nervous because I was scared. But now that it’s over, it was pretty fun. I did a lot of fun things and we learned about nature. Something that was fun was North Bay Live. It was a fun, party-like event in the theater. But some of the parts were serious lessons that we needed to know about real life and bullying.

We learned about the earth. Like fungus, for example. I learned about one called lichen. It’s a light green patch that is all over trees. There’s also something called invasive species they move to an area and try to take over the land. Plants that come from different countries that move here are invasive species because they’re not originally from America. I learned so much about the world around me by spending time looking closely at nature with the North Bay teachers.

I also learned how to take risks and to let things that you’re mad at go before you take it out on a person that it’s not meant for. We watched a movie called Toobie. Marcus, the main character, was going through rough times in his home and his mom’s boyfriend called him a “mama’s boy.” Marcus, in turn, called another kid at school, Willie, a “mama’s boy,” to pass his anger and frustration along. What Marcus didn’t know is that Willie’s mom died the day before. When Willie was sick of getting bullied, he decided at free period to fight Marcus but Toobie really stepped up and said “No good is going to come out of this.’’ I enjoyed the video and discussion. They really got me thinking.

I learned that the people that make you do bad things are not your friends they just want you to look bad. Say you and your so-called friends were throwing water balloons at the school. They run when the principal comes out. You get in trouble but you still hang out with them. “Why?” is my question “Why do you like them?” Maybe it’s we’re only 6th graders were not all geniuses. We are friends until something is said about you or the person is rude mean and nasty. North Bay taught me to think wisely about who I choose to make friends with.

We also learned about what positive people to keep in our lives, like filters. Filters are people who get you going and motivate you knowing that they have your back and you have theirs. I went on the zipline with my good friend Hayden. I was really nervous but it seemed like so much fun. Even though we were scared, we jumped at the same time because we turned it into a race! I won, but we both had fun doing it. We couldn’t have done it without each other.

We did a lot of team building activities. We even went in a chicken and rooster and duck pen to see what it’s like for these animals, but one was chasing me! Experiences like this gave us something to laugh about and something to bond over. We girls also learned how to live together for a whole week without boys! Being away from our family was hard so for that whole week we had to accept others’ boundaries and others’ limits, including not making fun of the things that they are scared of because we might be scared of the same thing.

Going to North Bay helped me show my true figure without putting on a lie or a front of someone I’m not. That really helped me cleanse and take some time to let everything go.