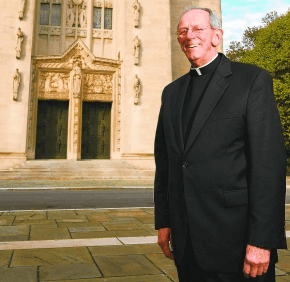 A funeral Mass was offered March 13 at the Cathedral of Mary Our Queen for Monsignor Robert Armstrong
Monsignor Robert Armstrong, the former rector of the Cathedral of Mary Our Queen in Homeland for a quarter century and a man who inspired countless religious vocations over the course of his 55 years as a priest, died March 7 after several years of declining health. He was 81.
As rector of the cathedral from 1984 until his 2009 retirement, Monsignor Armstrong oversaw many capital projects including major repairs, the restoration of the organs and the erection of a parish center. He also stood side by side with St. John Paul II when the pope visited the cathedral in 1995. But it was the priest’s strong example of faith and an unbreakable bond with parishioners that will be his lasting legacy, according to those who knew him.
“The best way I can describe him is to say that he took very, very seriously what the church asked him to do through ordination,” said Father Gilbert Seitz, judicial vicar of the Metropolitan Tribunal, who received his first Communion from Monsignor Armstrong at Immaculate Heart of Mary in Baynesville in 1962 when Monsignor Armstrong was a young associate pastor.
“The church asked him to become a father to the people of God and he did that extraordinarily well,” Father Seitz said. “When he entered into a relationship with you, he took care of you as only a father could. It was seemingly endless care.”
Father Seitz said his own religious vocation was inspired by his mentor, as were those of many other priests. As rector of the cathedral, Monsignor Armstrong worked with numerous seminarians, deacons and young newly ordained priests stationed there.
“He would not only encourage guys to become priests, he would train and support them,” Father Seitz remembered, adding that the priest also made sure retired priests received support. “He would be there for them throughout their lives, and would always remember their birthdays and the anniversaries of their ordinations.”

Monsignor Robert Armstrong served as rector of the Cathedral of Mary Our Queen for 25 years. (CR File)

Monsignor Robert Armstrong (center) is shown at a Mass in the Holy Land during a 2010 pilgrimage. (CR File)

Lori Brooks, an active cathedral parishioner whose husband, Jay, served on the church’s finance committee, said Monsignor Armstrong went “above and beyond” to show his gratitude for their service to the parish and was a frequent dinner guest in their home. Through the priest’s connections in Rome, he was able to arrange for her family to meet St. John Paul II in 2000.
“I feel like my faith blossomed while he was pastor,” she said. “He had a faith that was contagious. There is a saying that faith is caught, not taught. He was that kind of person.”
Beverly Ann Osterbur, Monsignor Armstrong’s niece, said her uncle always made himself available to celebrate first Communions, weddings and other sacraments for family members – even traveling to her home in Georgia.
“He was at everything he could be,” she said.
Monsignor Armstrong enjoyed yearly visits to Rome and eating steamed crabs in Ocean City with brother priests. Known for his quick wit, he was also interested in art, culture and architecture.
“You had to be quick on your toes to keep up with his one-liners,” Father Seitz said with a laugh. “Sometimes his language could betray the softness of his heart and his responses to you could not adequately capture how well he cared about you.”
Born in Pennsylvania and raised in New Jersey and Baltimore, Monsignor Armstrong spent three years in the Augustinian novitiate before deciding to become a diocesan priest.

After Monsignor Armstrong studied at Mount St. Mary’s Seminary in Emmitsburg, Cardinal Lawrence Shehan ordained him to the priesthood in 1962 inside the cathedral the priest would one day lead.

Monsignor Armstrong taught religion at Seton High School in Baltimore and was the chaplain of the Maryland Training School for Boys. He was an associate pastor of Immaculate Heart of Mary in Baynesville and served as associate director and director of the archdiocesan Office of the Confraternity of Christian Doctrine.

In the late 1970s, Monsignor Armstrong assisted at the South Baltimore parishes of Holy Cross; St. Mary, Star of the Sea and Our Lady of Good Counsel, and was the master of ceremonies for Cardinal Shehan and Auxiliary Bishop T. Austin Murphy.

The priest was named pastor of St. Michael in Overlea in 1978 and rector of the cathedral in 1984.

In a 2009 interview with the Catholic Review, Monsignor Armstrong said he loved each of his assignments. He especially enjoyed celebrating Mass and being present with parishioners for special moments. He was touched when then-Archbishop Edwin F. O’Brien referred to him as “the indomitable, irrepressible Monsignor Robert Armstrong” during a 2009 Mass celebrating the 50th anniversary of the cathedral. The comment sparked a standing ovation that lasted several minutes.

“It truly moved Bob,” Monsignor Hilgartner remembered. “It was recognition by the church officially saying, “Well done, good and faithful servant.”
Monsignor Hilgartner and Father Seitz acknowledged that leaving the cathedral was one of the most difficult times in their friend’s priesthood. It meant that he could not provide pastoral ministry in the way he always relished.
“We all know what it is to have your heart broken when a love has come to an end,” Father Seitz said. “That’s how profound his relationship with the cathedral was. It broke his heart because a love was coming to an end.”
Monsignor Armstrong will lie in state at the Cathedral of Mary Our Queen 2-9 p.m. March 12, with a vigil service at 7:30 p.m. A funeral Mass will be offered at 10:30 a.m. March 13 at the cathedral. Cardinal J. Francis Stafford, former auxiliary bishop of Baltimore and a close friend of Monsignor Armstrong, will be the homilist.
Also see: