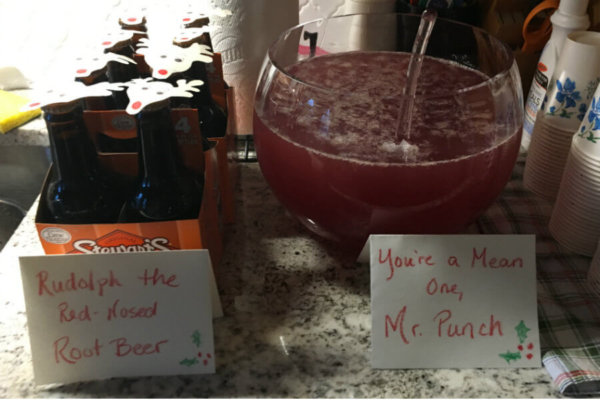 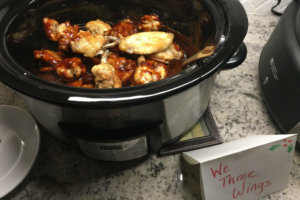 For the past few weeks I have been trying to sell people in my life on the idea of a pot-luck dinner where each guest would bring a dish inspired by a Christmas song.

I have come to realize that there are two kinds of people in the world—those who stare blankly at you and say, “Huh?” and those who say, “I love it! I could bring ‘The Little Drumstick Boy!’”

Although I did find friends and family members who thought this was a terrific idea, somehow Advent slipped by, as it so often does, and I never planned an actual Christmas-carol-themed pot-luck in my own home. 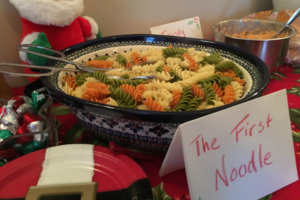 Then a few days ago I received an email from my sister Treasa.

She invited us to dinner and mentioned the Christmas-carol-themed names of some of the dishes she would be serving.

I was so excited to be part of the fun that I barely finished reading the message to discover that she wanted me to bring a “Feliz Navi-dip.”

I was ridiculously excited.

I cut out reindeer heads and taped them to bottles of root beer for “Rudolph the Red-Nosed Root Beer,” and I wrote up signs for the dip and chips (“I Saw Three Chips Come Sailing In”) we were bringing. 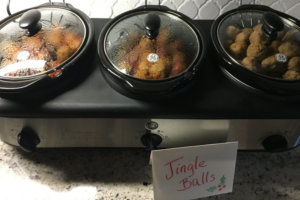 Because, of course, when we arrived at Treasa’s house, even though she has four children 3 and under, including 2-month-old twin boys, she had made gorgeous signs for all the dishes. 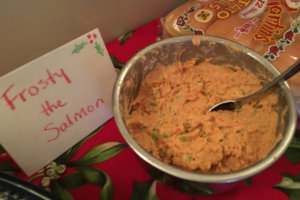 Now, you can run your Christmas-carol-themed pot-luck however you’d like. And you could require that guests might like to sing a verse or two of each song before filling a plate. I wouldn’t rule it out.

But Treasa and her husband, George, are so cordial and laidback that they didn’t have any rules along those lines. They just wanted people to relax and eat.

Still, I did do a bit of singing. You would have too, especially if you learned that one of your nephews had never heard “I Saw Three Ships Come Sailing in on Christmas Day” or “Mele Kalikimaka.” 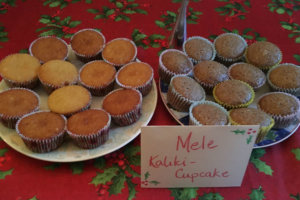 But the theme added a conversation topic and made the whole evening that much more entertaining—at least for those of us who see the value in having a themed pot-luck.

And, as far as I could tell, almost everyone there thought it was a great idea.

Or at least they didn’t protest because the meatballs and salmon salad were so delicious.

Personally I love a themed party and have been known to throw a few—some with more success than others—but this one really came together beautifully with very little input from me, and I have to give full credit to my sister and brother-in-law for carrying it out.

Right now the only question I have is how I will ever wait another year for the next one. I have so many ideas for songs for dishes and dishes for songs—and if you’ve read this far, I imagine you do, too.

Fortunately, we all have plenty of time to start planning our 2018 Christmas parties. And we can start putting together our guest lists. Inviting the right guests is always key.

As I greeted one guest at Treasa and George’s party, I said, “You may have noticed that the dishes are all named for Christmas songs.”

“I see that,” he said. “And all I brought to this dinner are my two front teeth.”