As a three-sport athlete, junior Michaela “Mickey” Burnett appreciates what the new athletic fields at Mercy High School in Baltimore mean to the student body and local community.

Burnett, who participates in soccer, indoor track and field and then lacrosse at the all-girls school, was one of the first to play on the new $4.3 million Sisters of Mercy Athletic Complex, which features two components: the Sisters of Mercy Field and the Mary Anne Heckwolf ’66 Field.

“This opens up new opportunities and new beginnings for faculty and student-athletes,” Burnett said. “For soccer, we have been doing a lot of running in practice using the turf and had some really solid practices. As a three-time champion in girls’ lacrosse, I can only imagine how helpful our turf field is going to be.”

The Sisters of Mercy Field features a 120-by-70-yard artificial turf playing surface equipped with a shock pad that has the highest safety rating for soccer, field hockey and lacrosse. It includes LED stadium lights that will allow the school to host outdoor sports events at night for the first time.

There is a new video scoreboard named in honor of the Nick and Mary Mangione family, a press box and bleachers that can accommodate about 2,000 spectators.

The Mary Anne Heckwolf ’66 Field, home of Mercy softball, opened in the spring. The field offers additional practice space for other field sports. 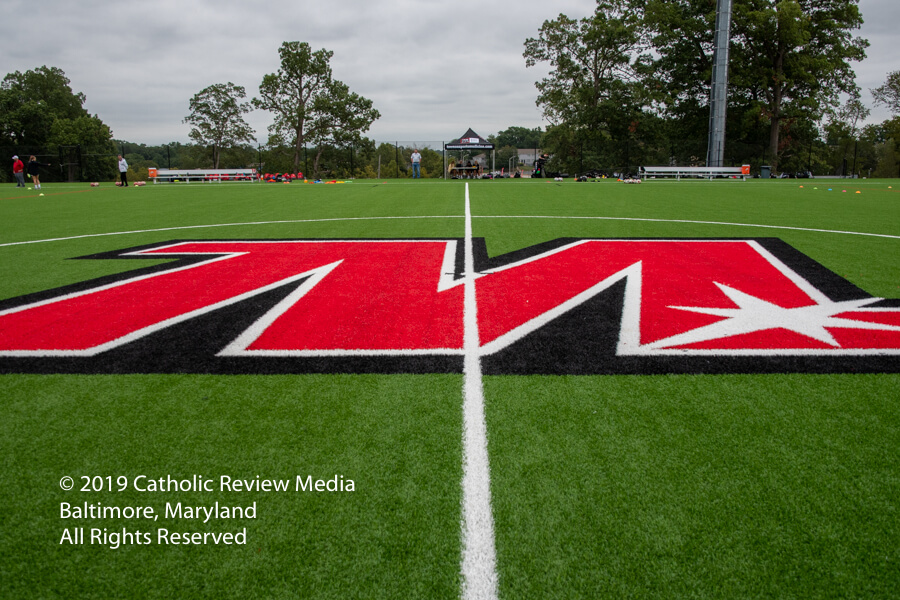 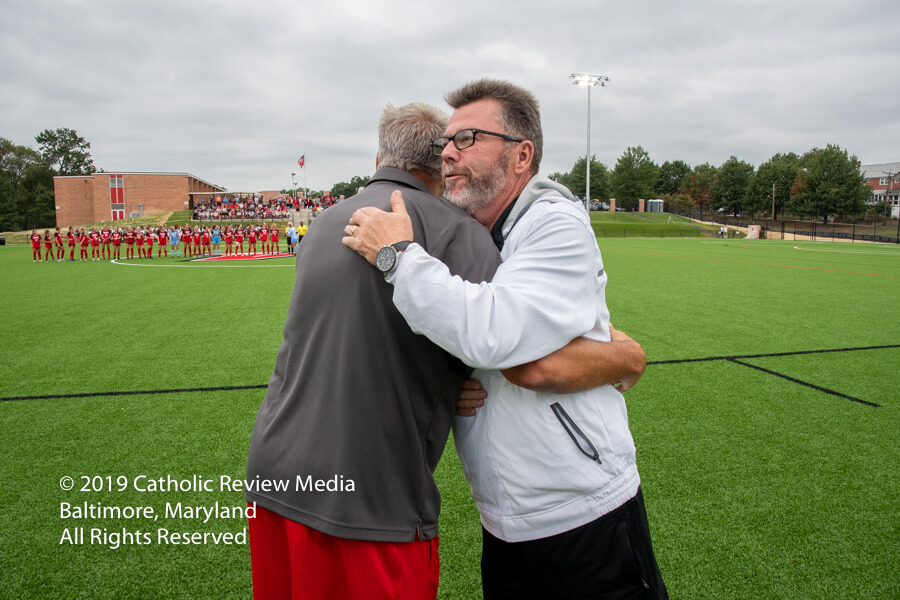 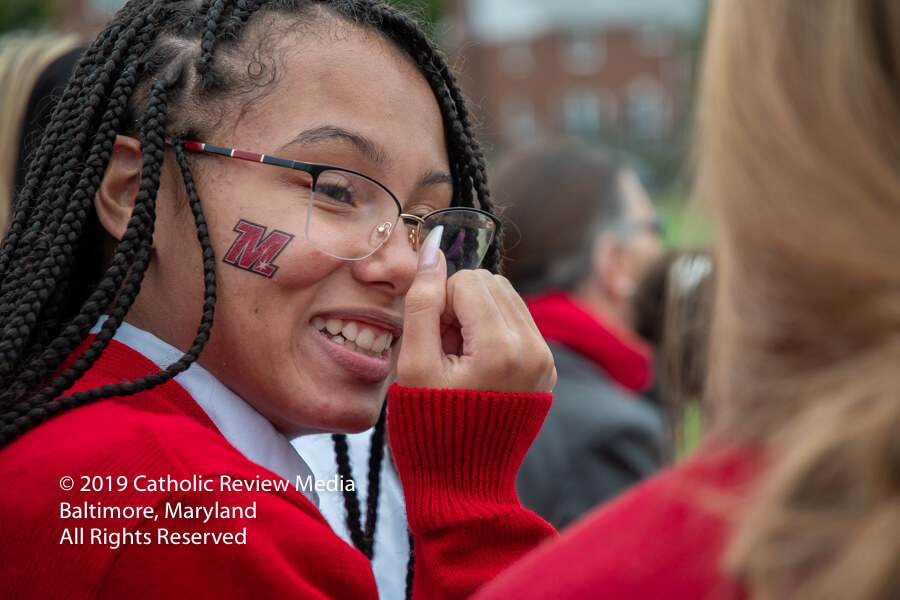 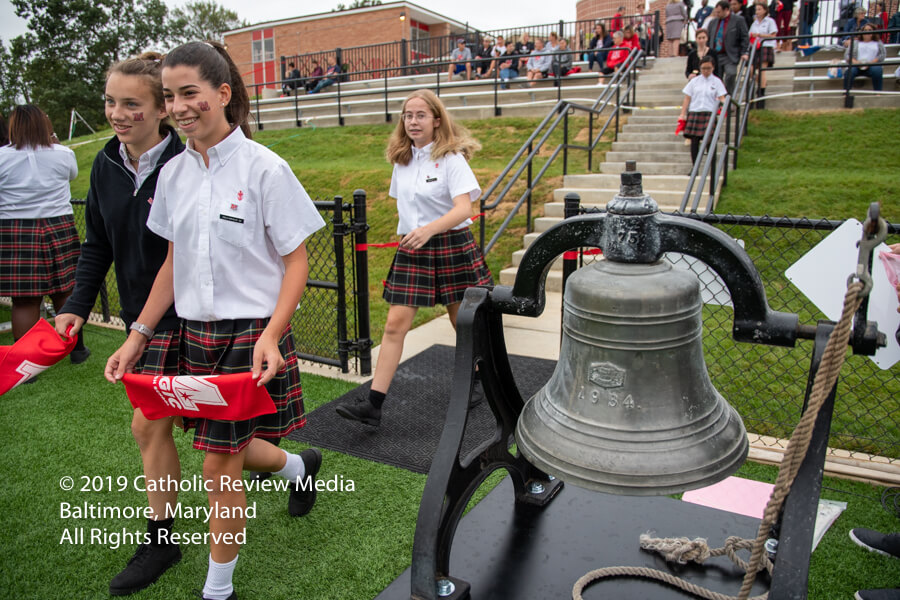 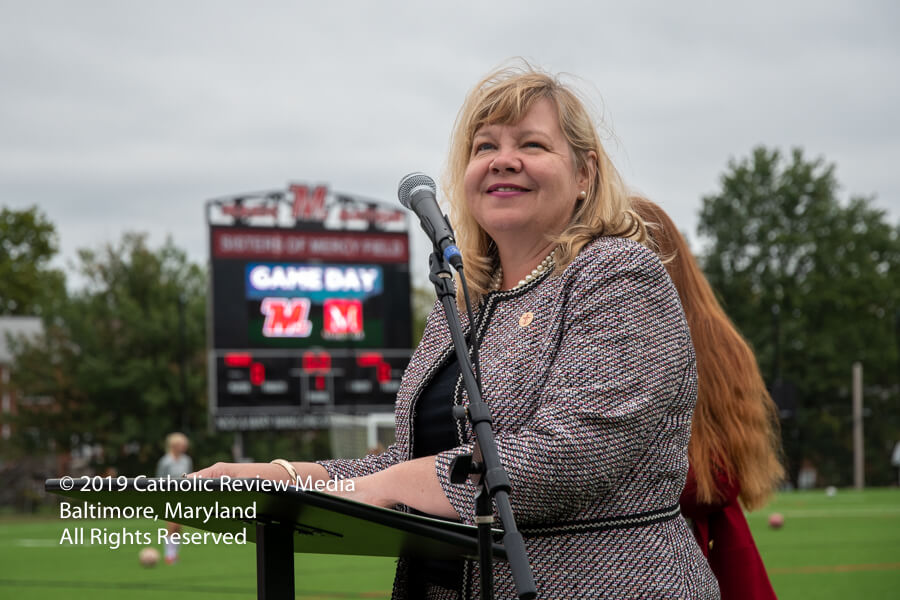 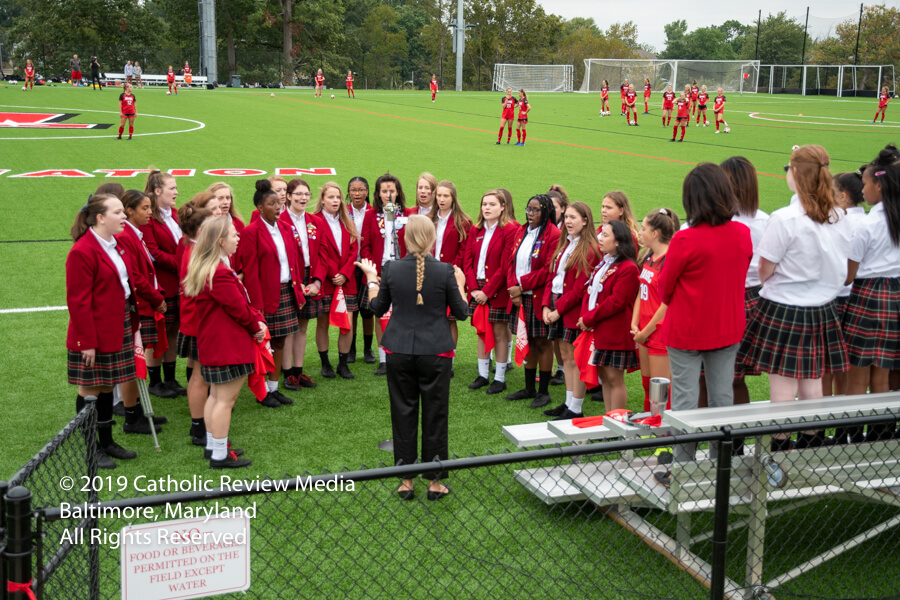 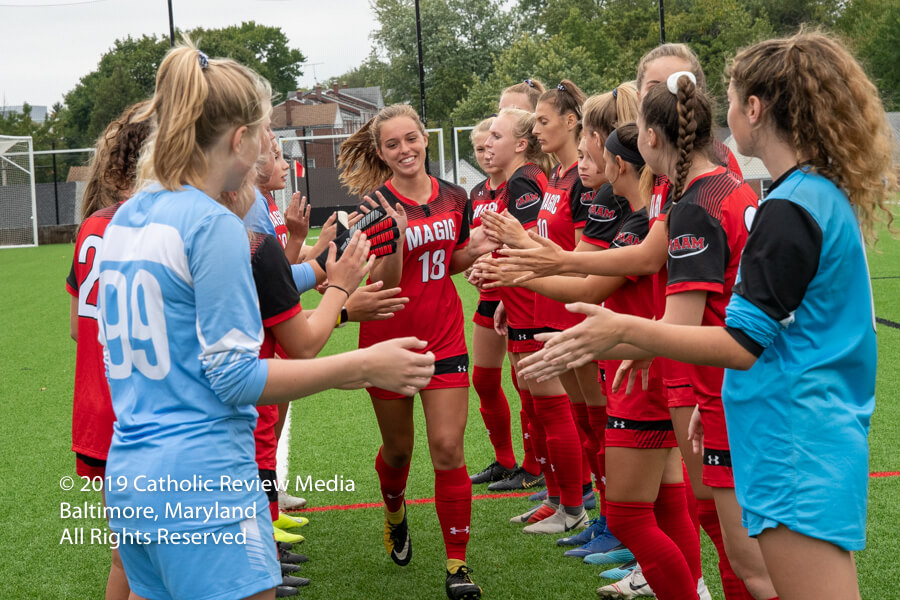 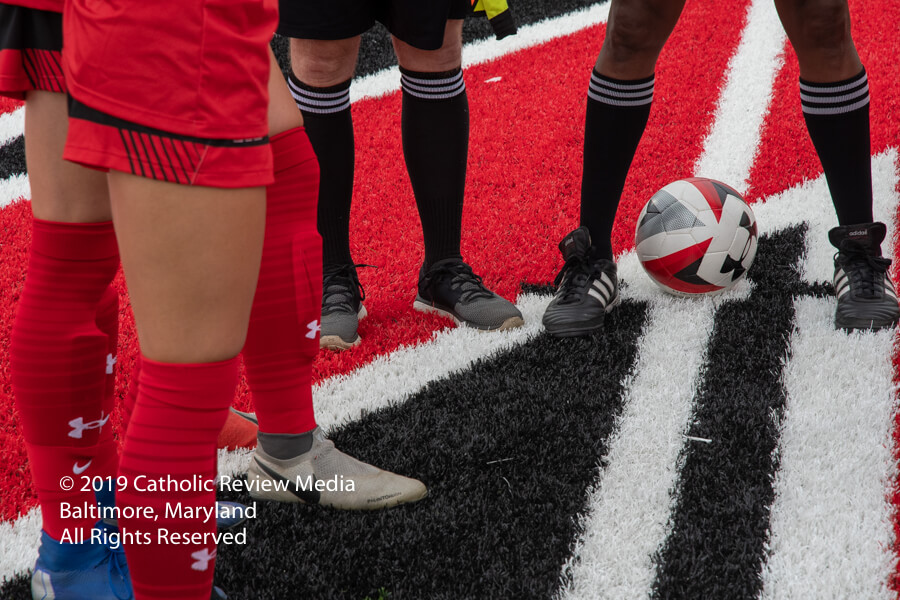 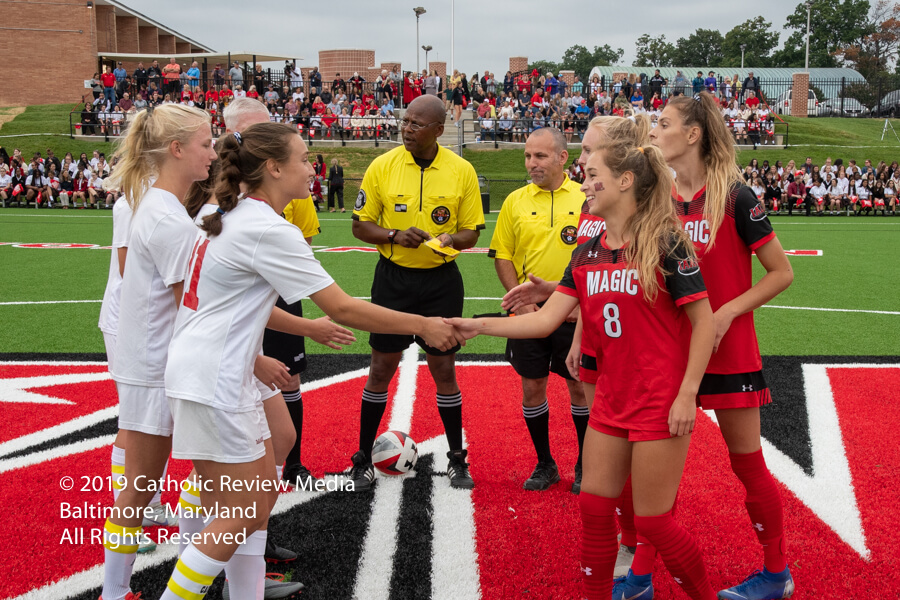 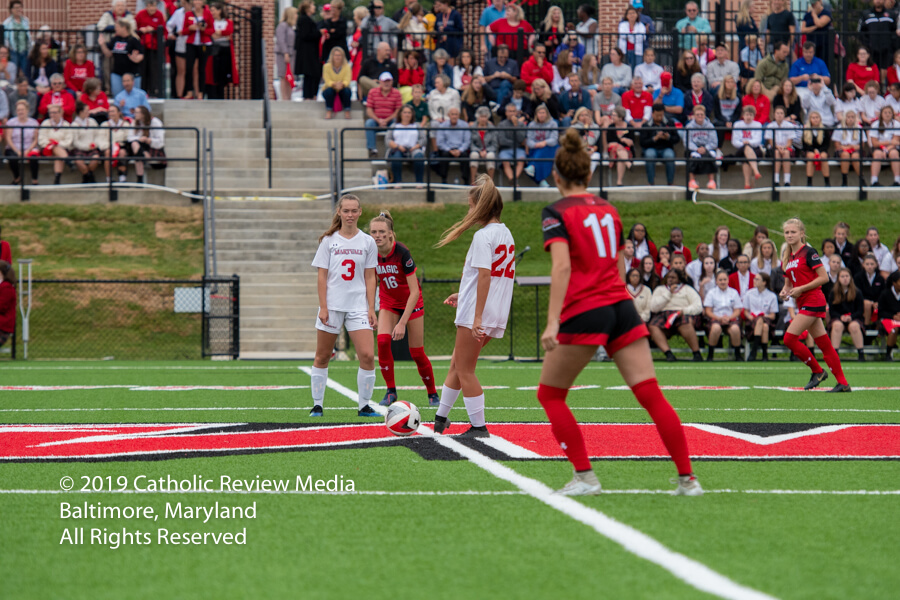 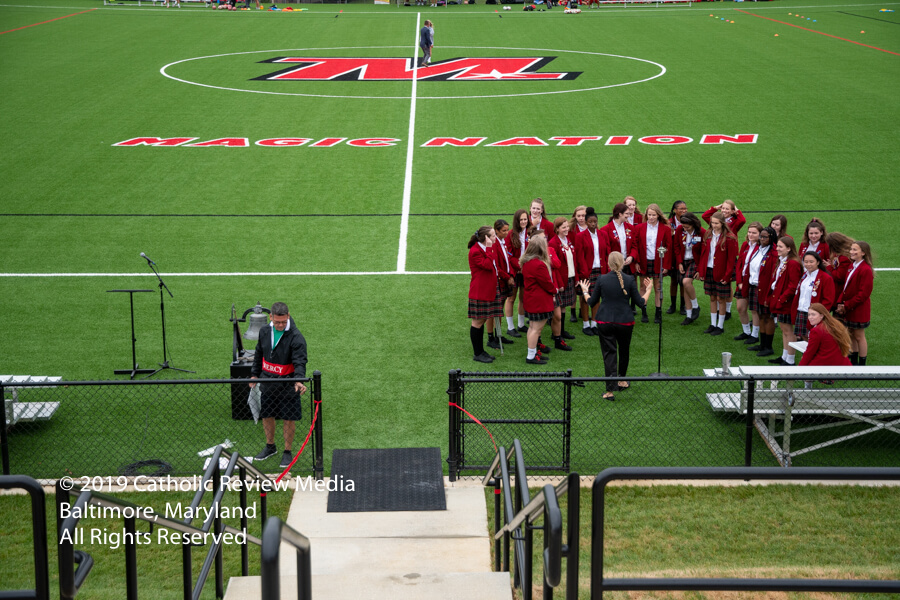 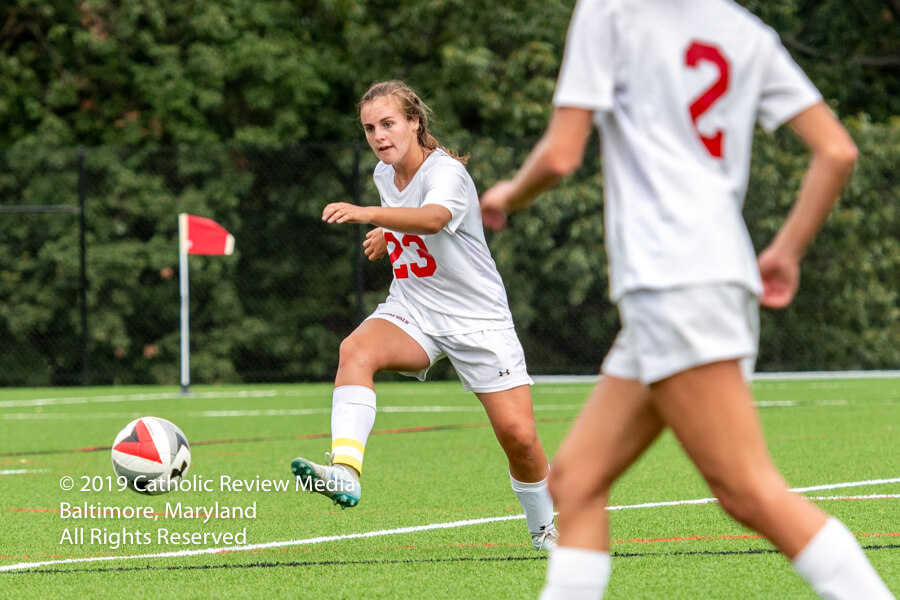 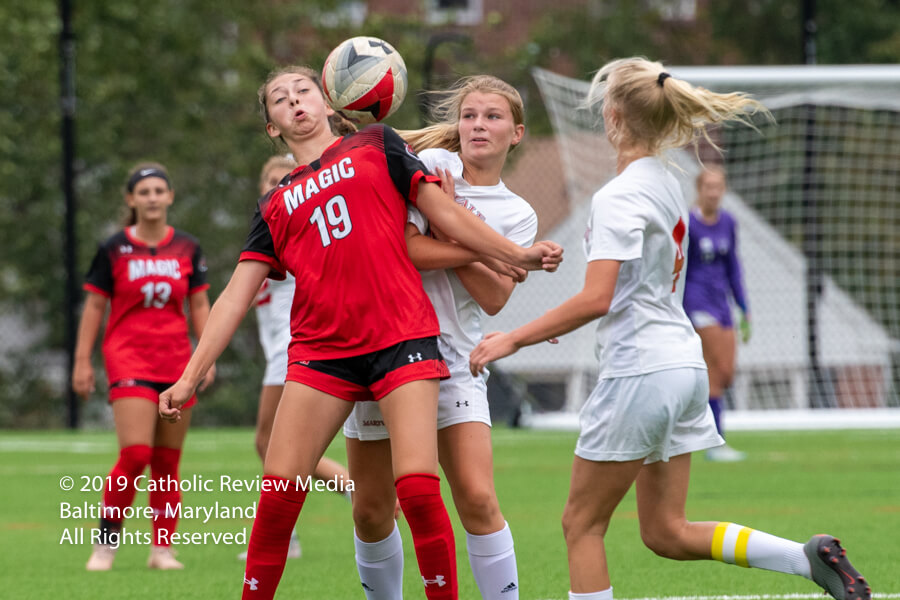 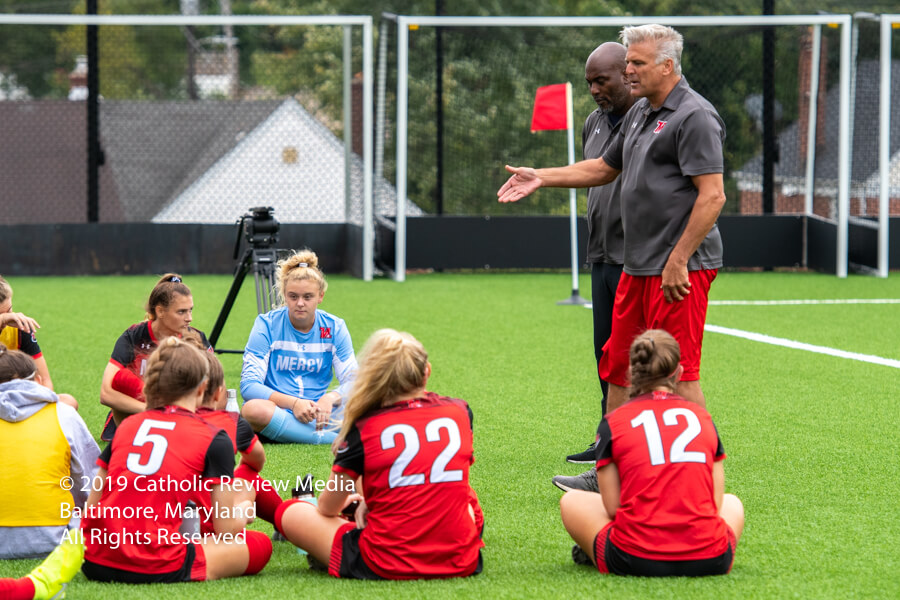 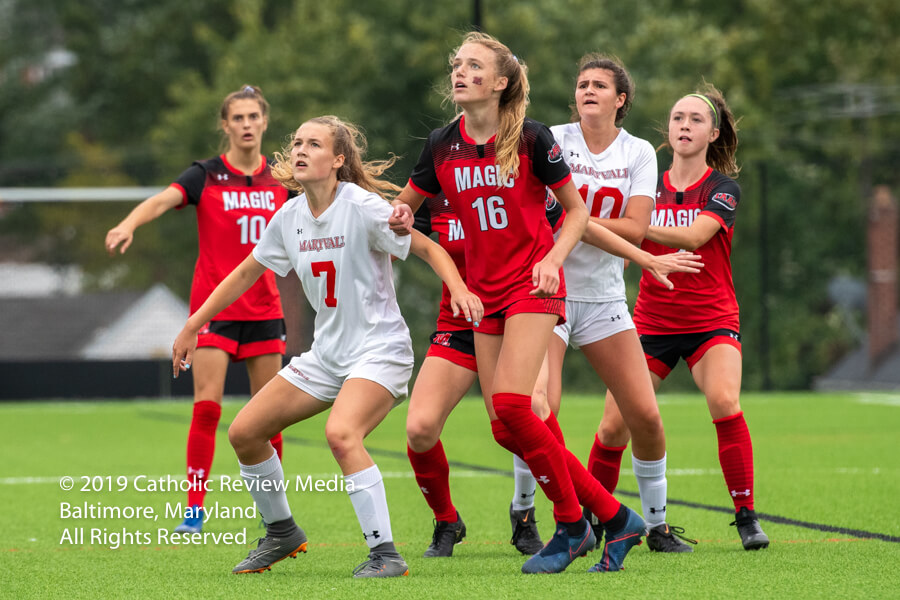 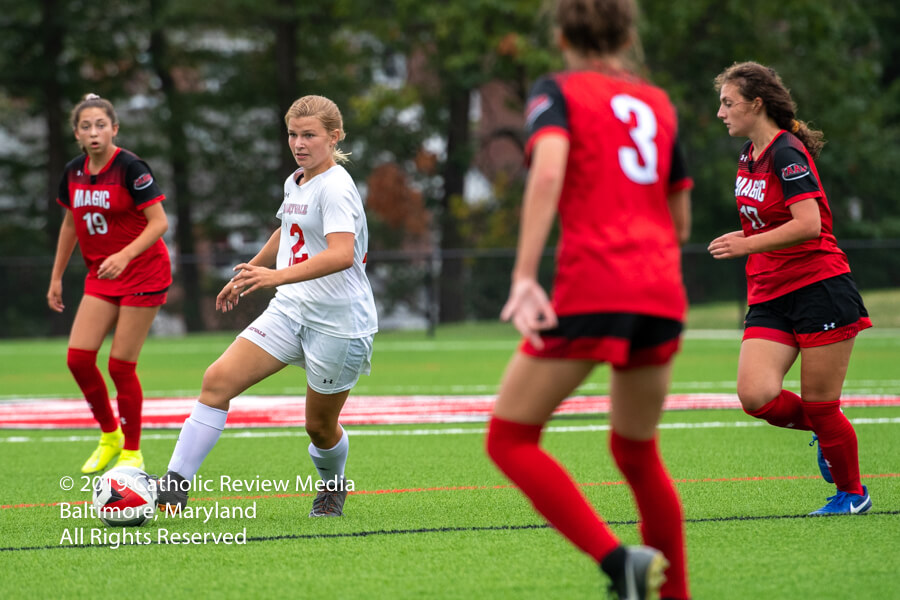 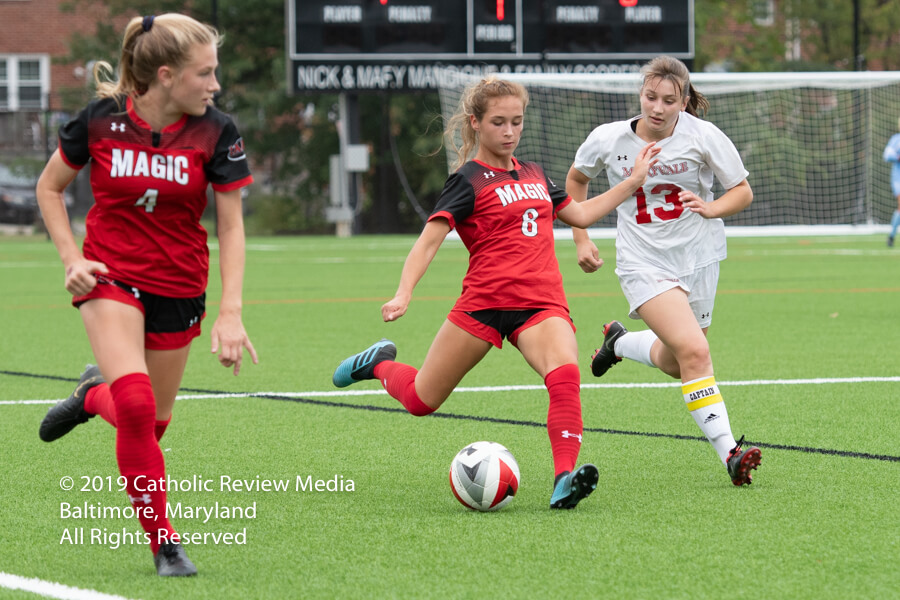 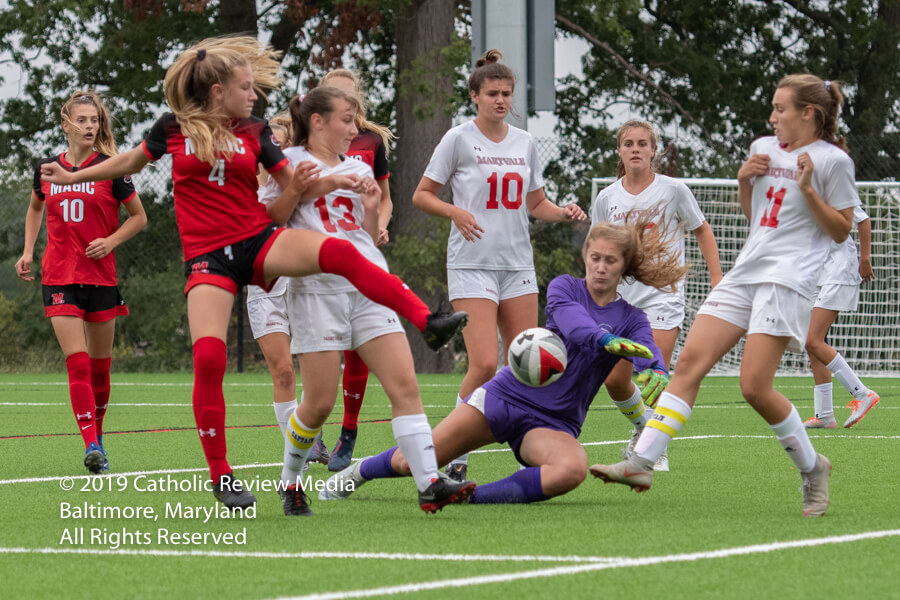 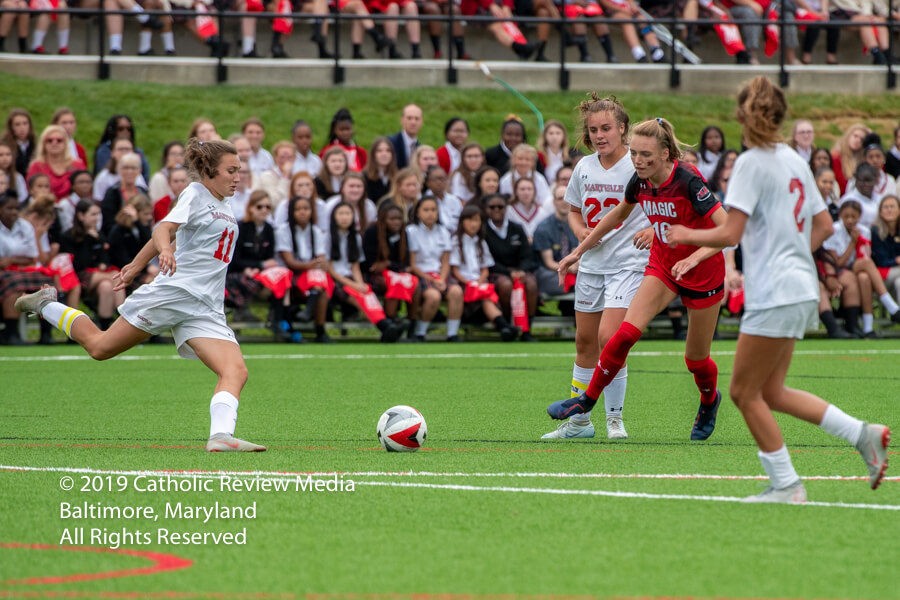 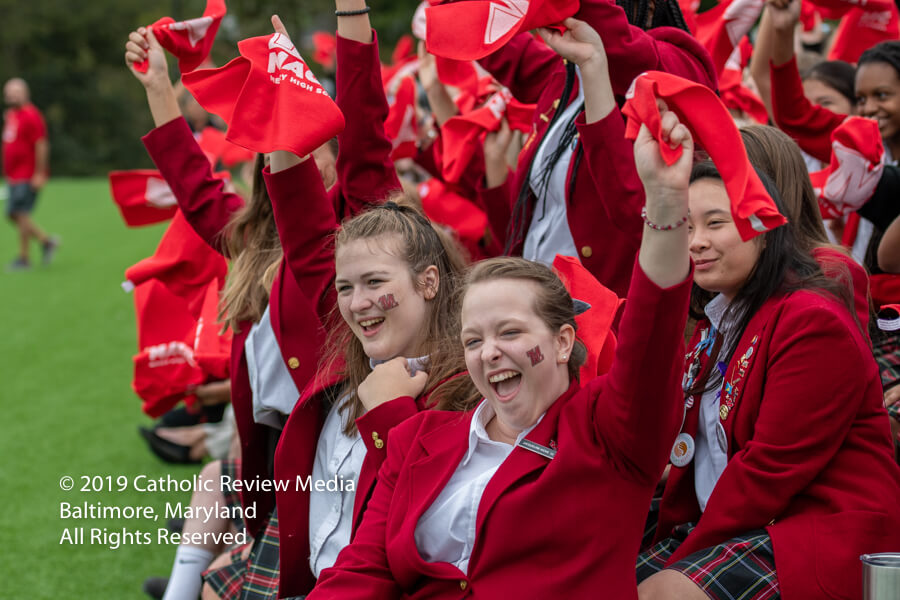 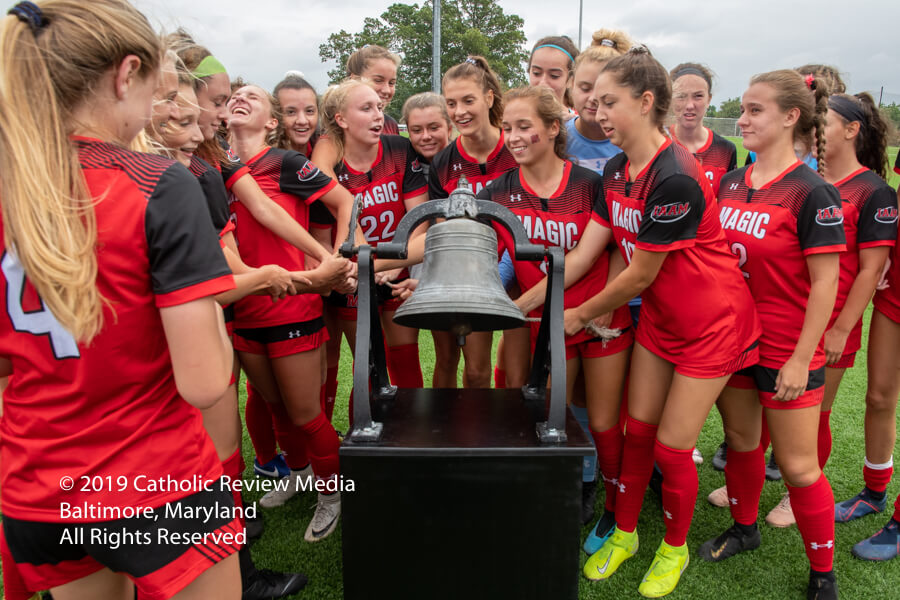 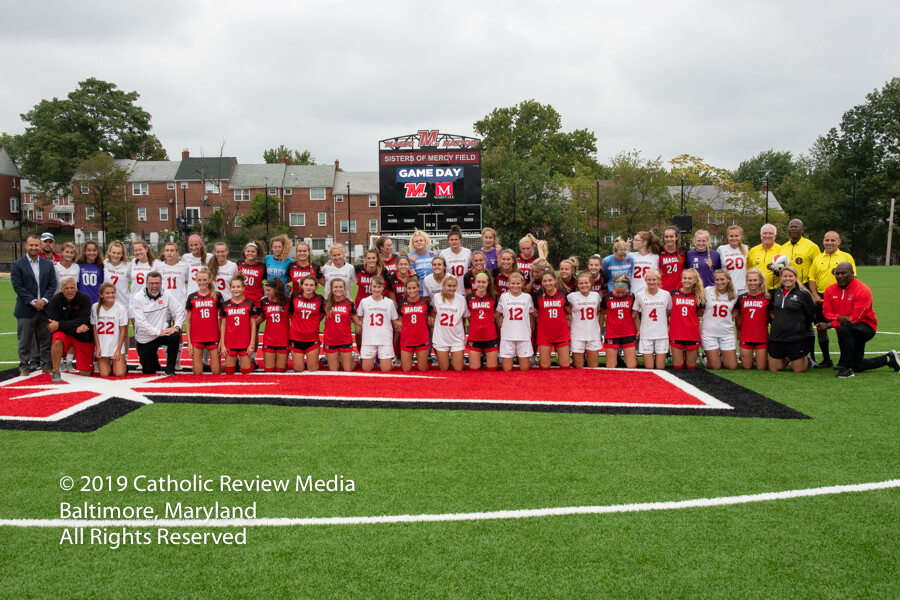 Over Sept. 6-7, the campus hosted a two-day soccer tournament dubbed the IAAM Challenge, which featured some of the top programs among the area’s private schools, including the nation’s No. 1 team McDonogh, and the metro area’s most talented public schools.

Mercy opened the showcase Sept. 6 with a ceremonial “Bell Game,” which coincided with the school day’s final bell so that all the students could attend the blessing of the field, presentations and a matchup against Maryvale Preparatory School. More than 100 people, mostly clad in Mercy red, prayed and sang along with the student body beforehand.

Mercy won 2-0 on a pair of goals by freshman midfielder Payton Schenning, who converted 30 seconds into the game.

“That helped,” said Mercy coach Doug Pryor, who has built the Magic into an A Conference contender. “It’s a big field. We’re used to playing on a smaller field with thick grass. This is a giant turf field that’s fast, so we have to adapt.

“It’s a special day, a long time coming. We are beginning new traditions … To pass them down to future Mercy girls and generations to come is a great honor.”

“It’s nerve-wracking, because I had never played against my sister,” Sydney said. “I can’t wait to play more games on this field.”

Mercy alumnae donated approximately $500,000 to help with the project.

A formal dedication of Sisters of Mercy Field, was held Sept. 5. It included faculty, alumnae, students and other area private schools, including nearby Calvert Hall College High School.

Field hockey coach Sarah Dennison said the complex will be a huge attraction. She already landed several new student-athletes for the 2019-20 school year thanks to the upgrades at the school, a member of the Interscholastic Athletic Association of Maryland.

“It brings a whole new level of competitiveness to the field hockey program,” she said. “Finally, we can really show off all of our skills. The girls are really excited.”

Schenning and Sydney Feiler are part of the second straight freshman class of more than 100 at Mercy, which has its highest enrollment since 2011.

“We are proud to enroll the largest total student body in eight years, and thrilled in the increase of girls trying out for all of our fall sports,” said Mary Beth Lennon, president of Mercy. “For the first time, we have a ninth-grade volleyball team in addition to varsity and junior varsity teams.

“The Sisters of Mercy Athletic Complex is a tangible sign of Mercy’s exciting growth.”

For more photos and to order prints, visit our Smugmug gallery here.

Todd Karpovich is a freelance writer for the Catholic Review. A 1990 graduate of Calvert Hall College High School in Towson, he is a contributor to the Associated Press, ESPN, the Baltimore Sun, PressBox and Sports Xchange, among other media outlets nationwide.

Todd is the co-author of “If These Walls Could Talk: Stories from the Baltimore Ravens Sideline, Locker Room, and Press Box”; “Skipper Supreme: Buck Showalter and the Baltimore Orioles”; and the author of “Manchester United (Europe’s Best Soccer Clubs),” “Derek Jeter and the New York Yankees,” and “Michigan State Spartans (Inside College Football).”