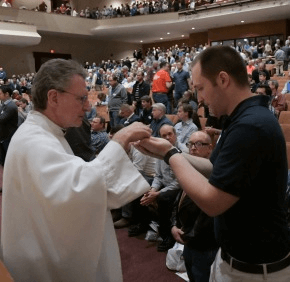 By Erik Zygmont
ezygmont@CatholicReview.org
As he filed toward the registration for the Catholic Men’s Fellowship of Maryland Annual Conference March 25, Dr. David Denisch, 84, a Towson dentist, said he was particularly excited to hear a speaker who he credited with his own reception into the Catholic Church on the Easter Vigil in 2016.

Like Denisch, Scott Hahn, who gave a series of three talks, on the sacrament of confession, evangelization and the Eucharist, is a former Presbyterian who came to decide that “the Catholics are right.”

While Hahn was ordained a minister at Trinity Presbyterian Church in Fairfax, Va., in 1982 and entered the Catholic Church four years later, Denisch, a parishioner of Christ the King in Towson, made his conversion over one-and-a-half decades.

“‘Why does it take 15 years?’ is the big, $64 million question,” said Denisch, who also lauded his pastor, Father Edward Meeks, for helping him make the leap of faith. “You know the truth, but it’s hard – agonizing – to take that step.”

Perhaps it would have been easier for Denisch had he attended the annual conference earlier.

“I didn’t realize there were so many Catholic men,” he said, taking in the crowd as he picked up his nametag in the Carl J. Murphy Fine Arts Center at Morgan State University in Baltimore.

At least 1,000 men from across the Baltimore Archdiocese – old and young, some in topcoats, others with Leatherman tools attached to their blue-jean belts – converged on the historically black university.

Evangelizing the evangelizers
While most of their audience were confirmed Catholics, speakers indicated that all conversion, including Denisch’s, is ongoing.

“It is not only lifelong; it also must become daily,” Hahn told his large audience during his talk on evangelization. “Is it ever going to be easy? Is it ever going to start to be fun? No – that’s why we need that grace every day.”

He noted that a theology degree is not a prerequisite for evangelization, and that Jesus chose simple folks to become the first evangelizers.

“As I look out (on the crowd), I see what would be the equivalent of first century fishermen and tax collectors,” Hahn said.

St. Isaac Jogues Church, Carney, parishioners Daniel Althoff, right, Tom Dauses, and his son, St. Margaret Church, Bel Air, parishioner Rob Dauses, pray following Communion at the annual conference of the Catholic Men’s Fellowship of Maryland March 26. (Kevin J. Parks/CR Staff)
While he noted the arduousness of continuous conversion, he also exhorted the audience to “enjoy being Catholic,” adding that the faith is “the thing to get you through the world today,” and should be shared with family, friends and co-workers.
“To withhold this is not an expression of friendship; it’s a betrayal of friendship,” he said. “It’s hard, but it’s worthwhile.”

He recalled recently answering his door to Mormon evangelists, walking refutations to the idea that “missionary work is something that happens ‘over there.’”

“They were lovely people,” he said. “They did a great job.”

Romanowsky paused, giving the audience a chance to examine his second statement in light of what he was doing at that moment – expounding on Catholic evangelization before a Catholic audience.

He called for a “fundamental transformation” in the way Catholics approach evangelization.

“We need to become missionaries, in a new way, in our own backyard,” he said.

Of course, for a healthy and dynamic church, vocations are necessary.

Father James Sorra, archdiocesan director of vocations, saw some irony as he took the stage.

“Every year I come here to talk about priestly vocations, at a men’s conference where 90 percent of you are married,” he said.

However, he added, “Priests are every bit as much, if not more, husbands than you are, because they conform their very being to the Bridegroom, which is the church.”

Furthermore, “My first name is ‘Father,’ just like yours is ‘Dad,’” Father Sorra said.

He urged fathers to be supportive of their sons who express a desire to consider the priesthood, noting that 47 percent of those are to some degree discouraged by members of their immediate families.

Archbishop William E. Lori shares a humorous story during his homily at the annual conference of the Catholic Men’s Fellowship of Maryland March 26. (Kevin J. Parks | CR Staff)
Even his own father, who raised him in an exemplary manner, was not initially thrilled about his decision to seek the priesthood, Father Sorra said.

“Granted, I told him under different circumstance,” he said. “It was my final year of law school, six months from final exams.”

While his father was initially angry, his mother, he said, immediately started to pray – “for the church.”

His parents had simply wanted him to be happy, Father Sorra said, emphasizing that Jesus Christ is the true source of happiness and fulfillment.

“It’s Jesus, brothers – it’s Jesus and Jesus alone who revealed to us what it means to be a man,” he said.

Call to holiness
Deacon Paul Shelton of Church of the Blessed Sacrament in Baltimore opened his talk with a straightforward statement:

“My name is Paul Shelton, and I am a recovering sinner. To be honest, I am a sinner who is sometimes in recovery and sometimes sinning.”

Deacon Shelton, now a managing partner at McKennon, Shelton and Henn, a Baltimore- and Washington-based law firm, had spent eight years in seminary, intending to become a priest, left due to being “angry at the church,” he said.

“I felt it had abandoned poor people and was retreating to the suburbs,” he said.

Then came another eight years, in which he “squandered the eight years of spiritual teaching and training God had given me,” Deacon Shelton said.

Despite his life being more or less in order – law school completed, etc. – something was missing.

“I realized I had to give my life more fully to God,” he said. “You’ve got to become more than just a believer.”

Deacon Shelton urged the audience to do the same.