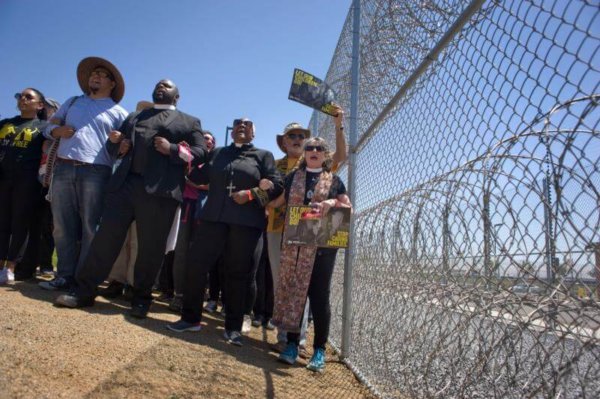 Faith leaders and several hundred supporters march next to a fence after entering the Otay Mesa Detention Center in San Diego June 23 during a rally in support of immigrant families who had been separated at the U.S.-Mexico border. (CNS photo/David Maung)

The crisis created at our border bids us to take action, and political action is good. But no matter what our political stripe, we’re called first to be Jesus’ disciples. Jesus is the center.

To find that center, we need to find silence and prayer. In an increasingly secular society, we forget that action should stem from contemplation.

Meanwhile, racial and ethnic profiling come to us from the top and seep down. The administration parades victims before us, people who have been hurt by undocumented individuals. While I have deep sympathy for those beset by any violent crime, there is no more reason to suspect the majority of those fleeing violence in Central America than there is to suspect the majority of those whose ancestors arrived on the Mayflower.

We as Catholics are obliged to speak up against bigotry, against the dehumanization of others. Making good legislation for border security is one thing; calling into question the humanity of those who are different from us is sinful.

Most of those fleeing violence are, as Jeb Bush pointed out during his presidential bid, doing so out of love. The United Nations reports that El Salvador and Honduras currently have the highest homicide rates in the world. People are literally running for their lives.

As the rhetoric heats up, people who work at the White House are being kicked out of restaurants. Entertainers make lewd jokes and hurl obscenities at the president. What’s happening to us?

St. Teresa of Kolkata put it this way: “If we have no peace, it is because we have forgotten that we belong to one another.”

Our world is in the largest refugee crisis since World War II, with over 68 million people worldwide forcibly displaced, according to the United Nations. Countries across the globe face serious issues on their borders.

A singer I know recently traveled to Italy where she sang with her choral group at a Mass at St. Peter’s Basilica. It was a thrilling moment for Anne.

But her strongest memory? The group sang at a refugee facility run in part by the Catholic Church. Anne was struck by the facility’s attractiveness, joy, cleanliness. It was neither a detention center nor a warehouse.

“It made me proud of my church,” she said. “It sends a tremendous message to the world on how the church views refugees.”

Then Anne reiterated a basic premise of our faith, one we proclaim as pro-life people. The facility, she said, affirmed “the dignity of the human person.”

To find out how the U.S. church is addressing the issue, visit justiceforimmigrants.org, which provides education, resources and suggestions for action.

Closer to home, my friend Larry recently drove 15 hours to help a Mexican man, who is applying for asylum in the U.S, attend a court appearance in another state. Had he missed the court date, called on very short notice, the man’s appeal might have been dismissed.

Larry went “over and above” the call of duty. But then, so did the Samaritan, who stopped by the roadside to help a stranger while others passed him by.

Father Pedro Arrupe, leader of the Jesuits in the late 20th century, said, “The church should, above all, be the church of the oppressed, the refugees, those persecuted for their faith, those relegated by the rich and powerful to the margins of society.”

That’s the church where we’ll find the center.