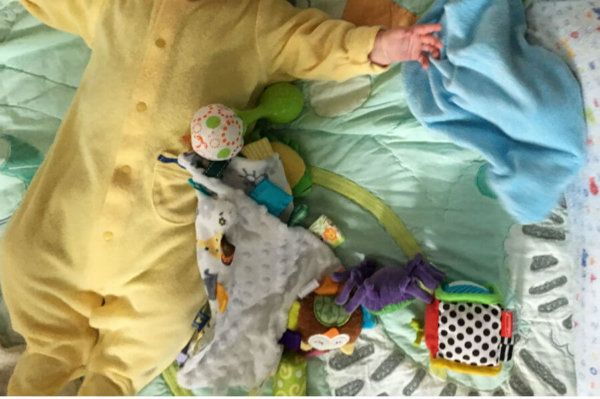 This morning I was thinking that my local nieces and nephews are growing up without me. They live about 15 minutes from us, and I pass their neighborhood fairly regularly. But my twin nephews are only five months old, so I don’t visit when someone in my family is sick. And this winter someone has been sniffling or coughing almost every day.

But we must be between illnesses right now because no one seems to be sick.

And it just happened that as I was finishing one work appointment, I realized I could probably fit in a lunch break before my next one. And I was going to be traveling right past my sister’s neighborhood.

So I called Treasa.

“Have you had lunch?” I asked. “Could I bring some chicken salad and some rolls?”

Treasa has four children 3 and under. I was pretty sure I’d get a yes—and I did. I think I could have offered basically anything—or nothing—and she would have welcomed me with open arms.

So I stopped at the grocery store, bought way too much food so she’d have enough for a few days’ worth of lunches, and headed to her house.

I walked inside, and found the baby boys lying on a quilt on the living room floor. One was fussing, but when he saw me, he stopped and beamed. He doesn’t know me at all, but he knows an empty pair of arms when he sees one. And there I was.

Soon I was holding a baby and my almost-2-year-old niece was peeking inside my bag of groceries to see what I had brought along. We dug out some shamrock cookies and she and her big sister sat down to taste the green sprinkles.

My mother was visiting, of course, and, without any planning, my brother in New England skyped in with his two youngest children. We sat and ate and talked, three generations in two states, enjoying chicken salad and cookies and counting down the minutes until naptime.

I didn’t stay too long because work was calling, but as I drove back to the office, I felt good. I had held both boys, hugged one of the girls, and given the other a high-five. My clothes smelled like babies, and I could still picture the big toothless smiles of my nephews.

It would have been easy to say that I didn’t have time today. But in a week where we have all lost an hour, it seemed like a good idea to reclaim an hour for myself. Life is short. There’s always another task, another project, another pressing issue to handle at work—and I’ll get them done because it’s my job, and I want to do it well.

But babies are only babies for so long.

And everyone needs to eat.