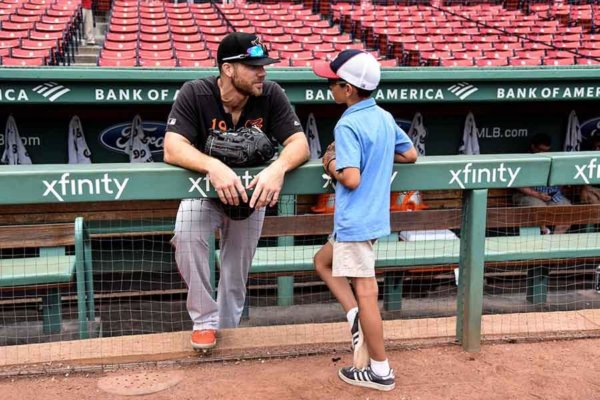 What makes an adult come to practice scorn, as opposed to empathy?

Clues are found in a child’s response, for instance, to the painfully public failures of Oriole Chris Davis, or the habits of the perhaps apocryphal Putsy Krutendorfer.

The dog days of summer for Oriole fans and Davis, albeit the highest-paid player in their once-glorious history, found emotional relief in mid-August, when the struggling slugger met 9-year-old Henry Frasca, a Boston Red Sox fan who had written him a letter of encouragement back in April.

Where did young Henry acquire that ability to consider the plight of others?

A quote from Nathan Ruiz’s story in The Sun about their encounter speaks volumes. As his son visited with Davis, Gabriel Frasca said, “This is his dream. The only thing better than your dream is your kid’s.”

My blessings include being raised by parents who modeled the same kind of compassion that has formed Henry Frasca.

First grade at St. Rose of Lima School in Brooklyn coincided with my father heading to the U.S. Army War College in Kansas. Upon his return, I trotted around the house following him – and his every word, as he became my primary homework resource.

In need of material for a theme in religion class, he told me about the aforementioned Putsy, who would occupy a pew at St. Mary Church in Nanty-Glo, Pa., and pull out his rosary. After offering a Hail Mary, he moved his fingers across the beads and could be heard to say, “Same to you, same to you …”

Lesson No. 1: They don’t make nicknames like they used to. Lesson No. 2: At the height of the Great Depression, in a coal-mining town awash in Irish and Polish immigrants, oddballs were tolerated.

My father’s duty in Kansas forced my mother to finally get a driver’s license in 1961. In addition to shuttling four kids to St. Rose of Lima and two to Mount St. Joseph High School, her regular passengers came to include one of the Sinsinawa Dominicans who comprised the faculty of St. Rose of Lima School.

I never sat in the classroom of Sister Dolorice Costigan, like some of my older siblings, and couldn’t recall her visage until her order provided the accompanying photo. Nonetheless, she played a central role in a pivotal childhood memory.

A family at the parish fell on hard times, so Sister Dolorice enlisted an authority to help her help them. My mother had birthed six children between 1947 and 1955. We were not awash in luxuries, but we never went hungry and our clothes were clean, so Sister Dolorice knew who to partner with to provide suitable attire and food for the family.

The best Christmas presents I  received as a youth were a James Bond 007 attaché case with multiple concealed weapons – and watching my mother wrap gifts of clothing for children who were strangers to me.

Sister Lois Hoh, archivist for the Sinsinawa Dominicans in Wisconsin, was kind enough to forward the notes from her obituary. It quotes a former student, who wrote: “She taught me to question, to put personal integrity above conformity, to care for others more than things, to love God above all and in all else.”

Her order added this: “She knew that the most important years of education are those spent in the grade school.”

We didn’t have kindergarten in those days. Everything I need to know, I learned at home and St. Rose of Lima School.