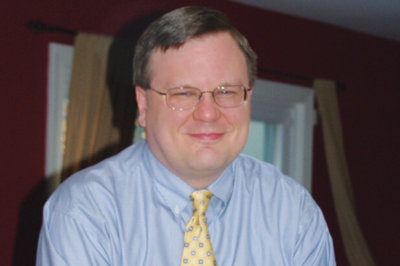 I was just a college freshman when Eric called to tell me he and my sister, Maureen, were engaged. In his rich, warm, bass voice, he quite formally told me he had just asked her to marry him. I was surprised – and touched that he took the time to call to tell me himself.

That was Eric, an exceptional communicator who was determined to spread the news in just the right way. I loved that – and so many other things about him, too.

He was witty and intelligent and compassionate, and wasn’t thrown off by our large, quirky family. When Eric got snowed in at my parents’ house without Maureen one January and survived days of card-playing and watching the same movie with her younger siblings, we knew this was forever. And it was.

Their wedding at St. Mary’s Church in New Haven, Conn., was beautiful, and so was their marriage. First Maureen taught full-time while Eric earned his law degree. Then he worked as an attorney while she earned a Ph.D. in theology. At every step, they balanced one another and shared dreams for their future and family together.

After I graduated from college, I often drove hours to spend weekends with them. Eric was always the consummate host. Then he and Maureen would come to visit me, as some of the only houseguests I ever had in my tiny, low-rent apartment. Eric made me feel the accommodations were perfect, even though they slept on a cheap futon, there was no air conditioning, and the horn of the passing freight train woke us all up several times during the night.

Brilliant and talented and eager to understand others and explore the world, Eric had many, many gifts. Singing and listening and excelling as a conversationalist spring to mind. But the one that I most wish I could emulate was the way he loved people exactly as they were. He was always completely accepting of everyone he encountered, embracing them without any expectations or judgment that they needed to improve in some way. That, to me, is an unusual gift, and a beautiful one.

Eric died suddenly last fall, and we find ourselves with a gaping hole in our lives. I know he has also left a legacy of love – love of his family, love of his friends, and love for those who had less materially than he had. He had a deep sense of injustice and gave generously to anyone and everyone who asked.

On the morning of Eric’s funeral, I arrived at the church early with my family and decided to take my sons and one of my nephews for a walk.

We were passing a bagel shop when a woman sitting on the sidewalk asked us to buy her a sandwich. I knew Eric would have said yes, so I didn’t hesitate. The boys and I walked with her into the shop. I was ready to pay, so I was surprised when the cook behind the counter shrugged, handed her the sandwich, and sent her on her way.

At first I was disappointed that I didn’t get to do this simple act in Eric’s memory. But then I imagined telling Eric about it. I thought of how we would have laughed together about my concerns. A woman who had been hungry was now enjoying a sandwich. That was enough.

During February, we think about love, and during Lent we may also consider how we can deepen our love of Jesus and of others. It can be hard to focus on loving people just as they are, but that is what I am trying to do in Eric’s memory.

I hope you, too, can find a way to make love for others a part of your Lenten journey. Perhaps each of us can establish a legacy of love.