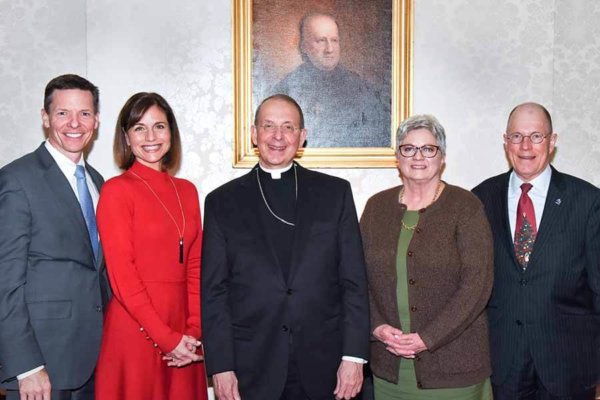 In late November, Archbishop William E. Lori welcomed Ralph and Christine Arnold, and Dave and Kristen Kinkopf to his residence for a thank-you dinner in recognition of their service as 2018 Co-Chairs for the Archbishop’s Annual Appeal. (Courtesy Archdiocese of Baltimore)

So much of the success of our archdiocese relies on the commitment and involvement of our lay people, people who give of themselves for the greater good. In late November at a special dinner in his residence, Archbishop William E. Lori recognized four such people — Ralph and Christine Arnold, and Dave and Kristen Kinkopf. The two couples served as co-chairs for the 2018 Archbishop’s Annual Appeal. The Appeal, which will henceforth be known as the Annual Appeal for Catholic Ministries, plays an integral role in sustaining the many ministries of the Archdiocese of Baltimore.

The Kinkopfs are parishioners of the Cathedral of Mary Our Queen in Homeland, the Arnolds at St. John in Westminster. The couples worked tirelessly in support of the Appeal, speaking at various events throughout the year. Their role included offering their own personal reflections on the importance of their faith in their lives and their insights as to how the Appeal helps to strengthen and sustain our vibrant Catholic community.

Archbishop Lori made a special point to thank the Arnolds and the Kinkopfs for their service to the archdiocese and acknowledge the role they played in the success of the Appeal. Although 2018 was a difficult year for the local and universal Church, their role as lay leaders for this critical fundraising initiative played an important part in the successful achievement of more than $9 million in gifts and commitments received in support of the 2018 Appeal. (Each couple was presented with a special gift as an expression of the gratitude of our entire archdiocese.)

Other guests at this special dinner included Jim and Elisa Hamilton, co-chairs of the 2017 Appeal, and pastors, Monsignor Joseph Luca and Father Jesse Bolger. A special welcome was also offered to Glenn and Beth Falcao, and John and Roslyn Balch, who will serve as co-chairs of the Annual Appeal for Catholic Ministries 2019.

The Annual Appeal team would like to take this opportunity to also thank the Kinkopfs and the Arnolds. They, along with past and future Appeal co-chairs, our pastors, staffs and volunteers, all make a tremendous difference, making the good works of our archdiocese possible. Their help brings comfort and spiritual fulfillment to so many of our friends and neighbors. They are true examples of living their faith and following the example of our Lord and Savior Jesus Christ.

Tasked with securing and stewarding the financial resources necessary for the archdiocese to successfully carry out its evangelizing mission, ministry, education and outreach, the Department of Development directs, manages and oversees campaigns, appeals and other development initiatives as directed by the Archbishop of Baltimore.

The Department of Development also provides professional and technical fundraising support support to parishes, schools, institutions and organizations of the Archdiocese of Baltimore.