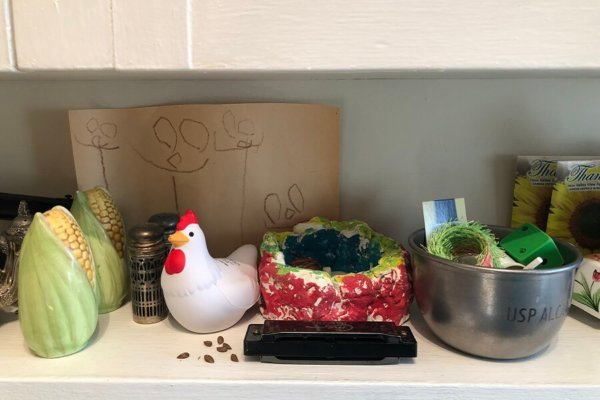 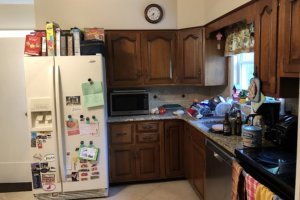 When I don’t blog for a few days, there’s usually a reason. Sometimes I have a pressing writing deadline. Other times we’re dealing with illness in the house. This time I haven’t blogged all week, and it’s because we are about to begin renovating our kitchen.

I can’t believe that’s an excuse—especially since we aren’t doing the work ourselves. We are hiring someone. But somehow packing up the kitchen, including trying to figure out which knick-knacks and children’s projects to hold onto, has been this enormous task.

We bought our house almost six years ago, and the kitchen was the one thing we didn’t love about it. We don’t have much cabinet space, especially pantry space. For years, we have talked casually about redoing that space, but we didn’t think too seriously about it until we realized one of the guests at our Chinese New Year party was a contractor who renovates kitchens. 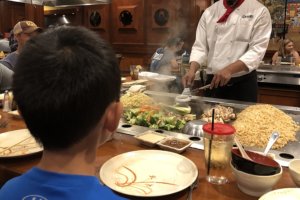 I can remember so many details—how warm and snuggly he felt in my arms, how he clung to a little plastic bag of snacks he had brought along with him, how his favorite toy was the stacking cups we had packed, and how the first night we were together he started calling us Mama and Baba.

For his Gotcha Day, he got to pick where we went for dinner, and he chose the hibachi grill for the second year in a row.

It’s impossible to imagine life without him. I’m so very grateful for all the people who have loved him in his life—and to God for bringing us together. We aren’t his first parents, but we’re his forever parents, and we are grateful to be part of his story.

Did you see Anderson Cooper’s interview of Stephen Colbert, where they discuss grief? I can only find a clip to link to, but even that part is so powerful. They discuss losing beloved family members at a young age and how they navigated—and continue to navigate—grief. You can see it here. It’s worth watching. 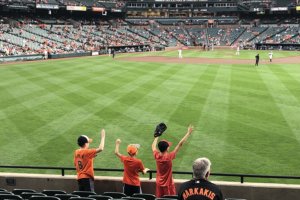 Our 10-year-old nephew who lives in New York is an Orioles fan, which I love. His mother—my sister Maureen—promised him an Orioles game this summer, so they came to town this week just for a game. We bought tickets ahead of time, which I never do because I like to see what the weather will be and whether we might happen to be launching a major household renovation that week.

Then a few hours before the game was going to start, I learned there was a parade scheduled to block Pratt Street right by the stadium starting right before the game.

To be honest, I wanted to bail and change plans. But we had the tickets—and a nephew who had been waiting all summer for this game. So, off we went.

We had absolutely no trouble at all. We sailed downtown, parked near the stadium, found our seats in the bleachers, and had a fantastic time. 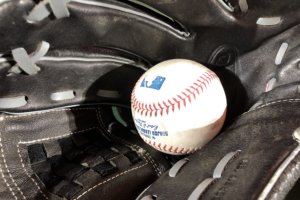 We sat in the bleachers because my fourth grader has been wanting to sit there and catch a home run. I wouldn’t want to sit there in blistering heat for a day game, but the seats were perfect for the evening. You can’t see the Jumbotron well, so you have to crane your neck a bit for the hot dog race, but the kids didn’t care, and I was content to watch their faces instead of the race itself.

I can’t remember a game where I saw more home runs—thank you, Orioles!—but they didn’t come that close to us. Still, the outfielders tossed balls back toward us regularly. At long last, the Orioles centerfielder Stevie Wilkerson threw a ball to our older son, who caught it as if he had been training for that moment all his life. 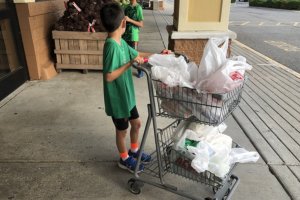 We went to visit my in-laws on Maryland’s Eastern Shore last weekend, and my boys and I ran to the grocery store. They are incredibly helpful shoppers, encouraging me to stick to my list, loading the groceries into the cart in an organized way, placing everything on the conveyor belt, and doing all the bagging.

I often get a comment from some kind person who compliments our sons on their helpfulness, but in this store, we were like celebrities. People kept stopping to talk to us, wanting to know whether the boys did well in school and how old were they because they are going to be so tall, and on and on and on.

It was fascinating. And it reminded me how much a kind comment from someone can have a wonderful impact. 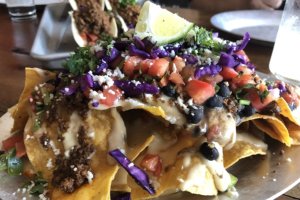 You can’t have 7 Quick Takes without one relating to food. So, here are some nachos we enjoyed at a taco bar we stopped at on our ride home from the Eastern Shore.

The nachos were delicious, especially with the black beans the chef included. It made me wonder why I don’t serve black beans more often at home. Everyone likes black beans, right? And they can come out of a can and require very little cooking, so maybe I could serve them every day during the kitchen renovation.

I had thought I might get a hot plate, and I still might. We are planning to use the fridge in our basement and the microwave we have moved to our living room/dining room. Will we survive? Or will I be knocking on a neighbor’s door asking if I could please use their stove?

Tune in next week to see how we’re doing.

Meanwhile, you can find more quick takes on Kelly’s blog, This Ain’t the Lyceum!