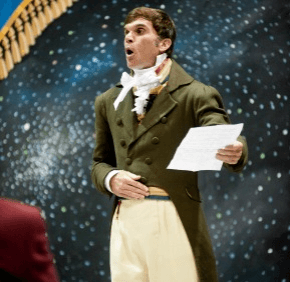 Alan Gephardt portrays Francis Scott Key at “Chautaugua 2012” at Montgomery College in Germantown in July 2012. (Reprinted with permission of The Frederick News-Post and Randall Family)

For an audience to believe Alan Gephardt is Francis Scott Key, Gephardt has to believe it.

That’s the secret to bringing Key to life, according to the man who has devoted 26 years to portraying the well-known author of the Star-Spangled Banner.

“When I talk about Key witnessing the bombardment of Fort McHenry or composing that poem, I see myself there doing the same things,” said Gephardt, who dons reproductions of 19th-century garb for his presentations – white pantaloons, a tailored overcoat with large buttons and a high-collared shirt neatly tied into a bow at the neck.

“If I suspend disbelief,” Gephardt said, “they’ll go along with me.”

It’s been 200 years since Key spied the American flag still waving over Fort McHenry after the British attack on Baltimore, inspiring him to write the Star-Spangled Banner. For Gephardt, that means mid-September will be a whirlwind as he appears as Key during bicentennial celebrations in the city.

The 58-year-old historian-actor relishes the role since he grew up not too far from where Americans inflicted damage on British troops during the 1814 Battle of North Point that preceded the bombardment of Fort McHenry.
Gephardt, raised in St. Luke Parish in Edgemere, first began appearing as Key in the late 1980s quite by accident.

He was riding his bike when his former chemistry teacher at Sparrows Point High School flagged him down.
Knowing of his former student’s interest in theater, the teacher asked the young man to portray Key at a local Defenders Day celebration.

Gephardt agreed, thoroughly researching the historical figure before giving his presentation. That led to other appearances around the state. Gephardt was soon one of the most respected interpreters of Key in the nation, appearing in History Channel documentaries about the War of 1812.

“Key strikes me as having been a very kind, gentle and thoughtful human being,” said Gephardt, noting that Key was involved in several charitable efforts including the American Bible Society. “He was a very religious man – an Episcopalian whose religious fervor informed his activism.”

As a lawyer, Gephardt said, Key defended African-Americans in court. Yet he was also a slave owner and a founder of the American Colonization Society, a controversial organization which sought to relocate freed slaves to Africa.

“It’s ironic that the author of what would become the national anthem was opposed to the War of 1812 right up to the writing of the Star-Spangled Banner,” Gephardt said. “He thought the war was a mistake and he opposed one of the declared objectives of capturing Canada.”

A former cantor at St. Luke and St. Clare in Essex, Gephardt occasionally sings the national anthem as part of his Key presentations. Because Key was tone deaf, however, Gephardt intentionally sings off key.

“It’s easy enough to make it sound like this guy can’t sing,” Gephardt said with a laugh, “but while I do it, I’m thinking, ‘I really want to sing this well.’ It’s a little difficult.”

Meet the Keys
As part of the “Star-Spangled Spectacular,” Gephardt and Socha will appear as Mr. and Mrs. Key outside Fort McHenry, Sept. 12 from 4 to 6 p.m. and Sept. 13 from 4 to 7 p.m. They will also appear on the main stage at Rash Field Sept. 15 from 1:30 to 2 p.m. Check out the schedule of Star Spangled 200 events here.
Email George Matysek at gmatysek@CatholicReview.org
Share
Tweet
Pin
PrevNext