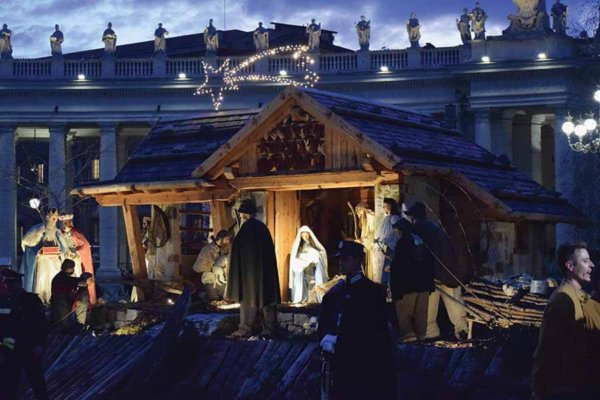 The Wise Men, left, journey toward the stable in the Nativity scene at its unveiling Dec. 5 in St. Peter's Square at the Vatican. (Christopher Gunty/CR Staff)

Early January is an odd time in the church year. The secular world has left behind Christmas. The wrappings are long since gone and most people have already put out the tree with the trash.

And yet, for those of us in the church, the Christmas season has more to give us. Last week, we celebrated the feast of the Holy Family and we still await the celebration of the feast of the Epiphany before the season ends with the Baptism of the Lord.

Though we often think of the shepherds and the wise men as contemporaries, the magi came to Jesus later, after a long journey. The Vatican unveiled the Nativity scene in St. Peter’s Square Dec. 5, and the wise men were off to the side, making their journey to the Lord.

According to the descriptions of the characters along the rail of the crèche display, “They have a majestic bearing and skin that shines in different colors to represent all the people of the world.”

The Nativity comes from Scurelle, a town in the Lagorai mountain range in the Trentino region of Italy. Featuring “expressive characters and typical mountain constructions, the Nativity scene represents the birth of Christ and immerses it in essential life, in close contact with nature,” the description says.

The wise men are not the only ones on the journey to the manger. They are accompanied by an assortment of characters – shepherds and shepherdesses, mothers and children, a farmer, a woodcutter, workers and an angel. And all are heading toward Mary and Joseph, waiting for the arrival of Jesus in the manger, who would be placed in the crib, according to custom, at the midnight Mass of Christmas.

The Nativity scene has its counterpart on the left side of the piazza in the new sculpture by Timothy Schmalz whose unveiling in September was attended by Pope Francis. “Angels Unaware” depicts a tightly-packed group of people in a boat. Within the group, a pair of angel wings can be seen, which suggests “that within these people is the spiritual,” Schmalz told Catholic News Service Oct. 1.

Those travelers are searching – for a home, for security, for light.

The characters in the Vatican Nativity represent not only the Trentino region, but all of us. The migrants depicted in the sculpture in the square, those on our borders, those escaping strife in the Middle East – all realize that their lives are not complete. The magi knew their lives were not complete unless they followed the comet that led them to the Savior. We must realize that too.

All around Rome (and most of Italy), Nativity scenes abound, such as a life-size one in Assisi featuring three dozen characters plus assorted animals. The scenes are a way to bring to life the story of the Incarnation, and we are all invited to be immersed in this story of salvation. At the “house of bread” in Bethlehem, we come to receive the bread of life.

In a way, we are all on a journey, seeking a home and security. As do the workers and woodcutters, the shepherds and the wise men, we seek the light. We don’t stop celebrating his birth just because the stores take down decorations and end the sales. We find the light in the manger and we trek to the Lord with all who seek him.

So, keep your Nativity scene up all the way through the end of the Christmas season, the feast of the Baptism of the Lord, so that we can remember, as Pope Francis noted in encouraging Catholics to have a crèche in our homes, that at the heart of even the simplest Nativity scene, there is a reminder of “God’s tender love: the Creator of the universe lowered himself to take up our littleness.”