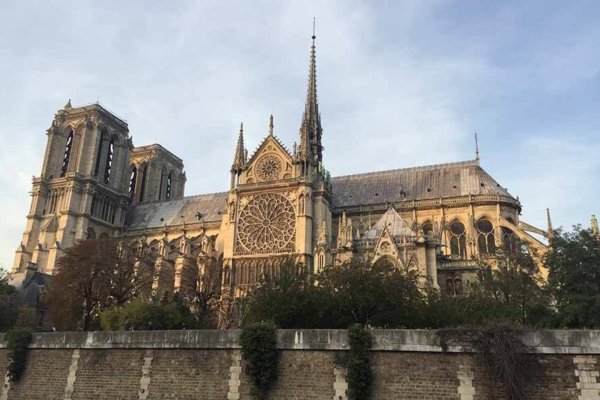 The Cathedral of Notre Dame in Paris is seen in a 2017 photo. The cathedral, built on an island in the middle of the Seine River, marked its 850th anniversary in 2013. The spire fell and the roof collapsed during a massive fire April 15, 2019. (Christopher Gunty/CR Staff)

Catholic Review Managing Editor Paul McMullen came into my office April 15 with his phone in his hand. “Have you seen what’s happening in Paris?” he asked, showing me the news feed of a massive fire at the Cathedral of Notre Dame.

I’ve visited the grand cathedral a few times since the late 1990s. It is an impressive place to visit and to pray.

My most recent pilgrimage there was when my wife and I spent a couple days in Paris after visiting the town of Saint-Omer with Archbishop William E. Lori. We were in northern France for events to commemorate the 275th anniversary of the arrival of Daniel Carroll to the School of the English Jesuits in Saint-Omer. Daniel was followed at the school by his brother, John – who became the first bishop in the United States and the first archbishop of Baltimore – and eventually by their cousin, Charles.

In Paris, Ann and I visited eight churches over the course of a couple of days, including the Church of St. Sulpice, recently damaged by arson. This church is the home base for the Sulpician Fathers who came to the U.S. to train men to be priests, and the order is still connected to our two seminaries in the Archdiocese of Baltimore.

We also visited the church of St. Gervais-St. Protais for evening vespers.

But the highlight, of course, was Notre Dame, just a few blocks west. On an island in the middle of the Seine, it beckons all.

People gather in the plaza and along the pedestrian streets near the cathedral on a daily basis. It’s reported that twice as many people visit the cathedral every day than visit the Eiffel Tower.

A vendor in the plaza sells birdseed to tourists who hold it in their hands to allow the numerous pigeons to alight and eat. Notre Dame attracts believers and nonbelievers alike to view its beauty. Like the Blessed Mother herself, the cathedral points people to Jesus.

At least it did until yesterday.

The structure of the cathedral has been saved, but the spire and the roof are gone. It will take quite some time, but Paris Archbishop Michel Aupetit and French President Emmanuel Macron have pledged to rebuild.

Just a few days before the fire, the sounds of France echoed through the Basilica of the National Shrine of the Assumption of the Blessed Virgin Mary when the Orchestre d’Harmonie de Saint-Omer (Saint-Omer Wind Orchestra) played a concert to celebrate three centuries of friendship between the U.S. and France.

As a young student, John Carroll and his brother Daniel attended school in Saint-Omer in northern France in the 1740s. John eventually joined the Jesuits and returned to Maryland. The connection between Maryland and France remains strong today with the establishment of the Maryland Chapter of the Saint-Omer Foundation for Transatlantic Values.

François Decoster, mayor of Saint-Omer and vice president for culture of the Hauts-de-France region, was scheduled to leave Maryland for France the day the fire erupted at Notre Dame. He and other officials had been in Baltimore and Washington for concerts by the 70-piece orchestra and other events.

Reached at BWI Airport April 15 just before departing for France, Decoster said of the fire at Notre Dame that had been burning for about five hours at that point, “It’s really a tragedy. We are all watching whether the firemen will be able to control the fire. So far, they are not. The images are really terrifying.

“The French people and people all over the world are watching this. They see this burning,” he told the Catholic Review.

Noting that he and his associates had been in the U.S. to celebrate the shared history between France and the U.S., especially Maryland, he said, “Our history, of course, shares the history of Paris. The Carroll family knew the capital city. They would have been there.

“At the same time, this tells us how important the patrimony is to the people,” he said of the inherited heritage and culture of Paris. Notre Dame is especially important as both a spiritual site and tourist attraction.

“The cathedral has welcomed so many historical events,” Decoster said, including marking the ends of wars, important funerals, coronations and others.

He worked and studied for 20 years not far from the Cathedral of Notre Dame.

“It’s an architecture that every person in Paris knows as part of every day. It’s a building really present in our lives.

“It’s amazing to think that this building may vanish. Part of it is vanishing. The roof is gone. The arrow (spire) is gone,” Decoster said.

The cathedral basilica in Saint-Omer is also named for Our Lady. Archbishop Lori celebrated a Mass in the Cathedral Notre Dame de Saint-Omer to celebrate Franco-American friendship in October 2017.

The belfry of the cathedral, built in 1492, had been renovated recently, and along with it the six bells in the tower were replaced and brought back to life. The Archdiocese of Baltimore contributed one of the bells, a smaller one named “Domatille.”

With the renovation, the six bells, including the largest, which weighs five tons, can ring.

Anne Pierard, a member of the Friends of the Cathedral, noted that church bells peal to call people to prayer, to warn townspeople, to mourn for the dead or to celebrate joyous occasions.

Mayor Decoster posted on his Facebook page, while the fire still burned, that people from all around the world expressed solidarity with Parisiennes and all of France at the loss of the priceless heritage of the Paris cathedral.

“Tonight, in Saint-Omer, the bells of the Cathedral Notre-Dame have rung in testimony of our infinite sadness,” Decoster said.

Those who wish to help the restoration effort can contribute through the French Heritage Society, a U.S. 501(c)3 charitable organization. FHS is the main American heritage organization in France and the US, and has given close to $2million in restoration and education grants in the last two years. Donations made be made online at https://frenchheritagesociety.org/event/notre-dame-fire-restoration-fund/.