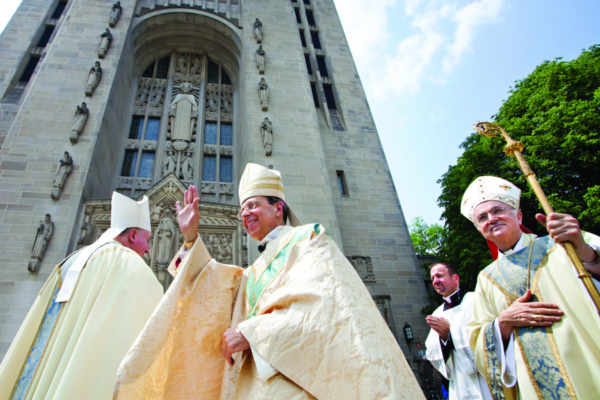 Archbishop William E. Lori prepares to enter the Cathedral of Mary Our Queen in Homeland for his May 16, 2012, installation Mass. (CR File)

About a half a year after he became 16th Archbishop of Baltimore, Archbishop William E. Lori experienced the pain and sadness of a violent tragedy in his former diocese of Bridgeport, Conn., when a gunman killed his mother and then 20 schoolchildren and six staff members before killing himself in December 2012.

The archbishop recalled his many connections with the community in Newtown, Conn., comparing it to “a storm that assaulted us.”

“In the wake of Newtown or any other sadness and tragedy in our lives, let us not seek to quickly return to business as usual,” the archbishop said. “Yes, we want to recover our equilibrium and a healthy sense of predictability in our lives. Yet there needs to be a critical difference, and it’s this: Faith in God is not just a trait for troubled times but rather a constant companion in our daily sojourn.”

Three years after Archbishop Lori was installed in May 2012 in Baltimore, his new community experienced another major tragedy when Freddie Gray Jr. died from injuries suffered in police custody. The riots that broke out were emblazoned on TV screens across the country and around the world.

In a statement released the day of Gray’s funeral but before the riots broke out, the archbishop said, “Freddie’s death symbolizes the rawest of open wounds and the only salve that will heal them is that of truth: truth about what happened to Freddie, truth about the sin of racism that is still present in our community, and truth about our collective responsibility to deal with those issues that undermine the human dignity of every citizen.”

The archbishop gathered with leaders of other faith communities to address the systemic problems in the city, building on the foundation for interfaith cooperation that had been built by previous archbishops. He gathered a small group of such leaders to join him on a pilgrimage to Rome to ask for Pope Francis’ blessing on their work to unite and heal the city. At the end of that trip, the archbishop said the faith leaders’ in-depth conversations helped them learn from each other.

“What we kept talking about was our role, united as diverse faith leaders in building bridges in the larger community, whether that is with the political establishment in our state of Maryland and in our city, or whether that is across denominational lines, across socio-economic lines, across racial lines and barriers,” he said.

The archbishop will be one of the panelists for “Violence, Faith and Policing in Baltimore,” on the collaborative role of faith-based organizations and law enforcement regarding violent crime. The event – sponsored by Georgetown University, Baylor University and DeMatha Catholic High School – will be May 3, 6 p.m., at 101 Constitution Ave., NW, Suite 700, in Washington, D.C.

Archbishop Lori has also focused his time in Baltimore on “making missionary disciples,” echoing Pope Francis’ call to “missionary conversion.” The parish planning process underway – begun with the archbishop’s first pastoral letter, “A Light Brightly Visible” – aims to ensure that parishes are organized in pastorates with their primary mission of evangelizing and helping Catholics to be ready, willing and able to embrace and welcome people into a relationship with Jesus.

Working toward unity in our community and leading that pastorate plan  would be enough to fill his 1,800-plus days as the spiritual leader of the half-million Catholics in the archdiocese. But Archbishop Lori remains the U.S. bishops’ point person on religious liberty, and is supreme chaplain to the Knights of Columbus international fraternal order.

He has visited countless parishes and has stood many hours in receiving lines greeting the faithful after Masses and other events. Five years in as the 16th shepherd of the first diocese in the United States, it seems like Archbishop Lori is just getting started.