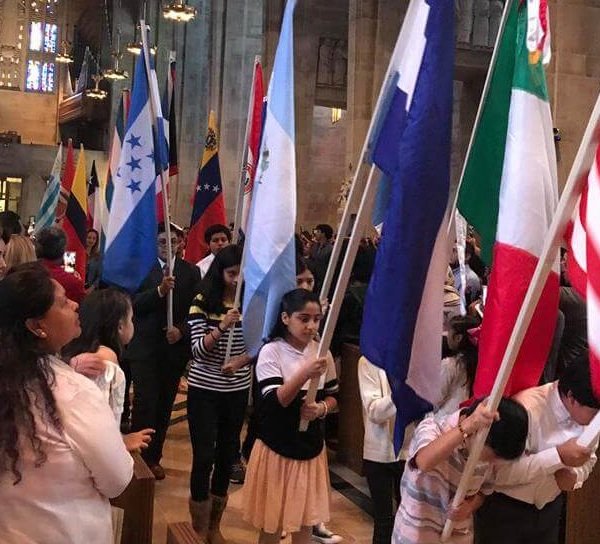 Children carry flags representing a variety of countries during a Mass of Thanksgiving for the canonization of St. Oscar Romero at the Cathedral of Mary Our Queen in Homeland. (Courtesy Arquidiócesis de Baltimore Ministerio Hispano)

When I visit Emmitsburg, it’s invigorating to be on the grounds where St. Elizabeth Ann Seton made her mark. I can also see the same excitement building for the possible canonization of Blessed Stanley Rother, who completed seminary studies at neighboring Mount St. Mary’s Seminary.

It’s an honor to know that such holiness was centered in an area no more than an hour from my hometown.

I could see that same overwhelming excitement on the faces of Edgar Ruano and Helman Argueta, parishioners of St. Joseph in Cockeysville, when they spoke with me about St. Oscar Romero after the Spanish Mass at their parish Sept. 15. They were preparing for his Oct. 14 canonization, when St. Romero became the first saint from El Salvador.

Both natives of the Central American country, Ruano and Argueta shared stories about their personal connections to the saint: Ruano was a member of a choir which sang for Masses celebrated by St. Romero, and Argueta was from the same hometown, Ciudad Barrios.

Maryland has one of the largest communities of Salvadorans in the United States, which was apparent during a Mass of Thanksgiving for St. Romero’s canonization Oct. 28, when members of the Hispanic community filled the Cathedral of Mary Our Queen in Homeland.

They were participating in a Mass of thanksgiving for St. Romero’s canonization. I recently sat with Lia Salinas, director of Hispanic ministry for the Archdiocese of Baltimore, Nov. 6 to learn more about the event.

“Maryland has a large number of Salvadorans,” Salinas said. “There’s a big devotion for Archbishop Romero.”

The Mass was the second annual gathering of the Hispanic community in the archdiocese, following the V Encuentro gathering last year. Salinas said the plan is to host an event every year that brings the community, Archbishop William E. Lori and the auxiliary bishops together.

Salinas said Archbishop Lori shared with her that he truly cares about the Baltimore’s Hispanic Catholics and that the turnout for the Mass of thanksgiving shows the community is vibrant and present in the archdiocese.

A native of El Salvador, Salinas recalled the height of the nation’s turmoil, when she could watch bombs drop from the sky.

“To have lived in El Salvador in the 1980s, you couldn’t escape the civil war,” she said.

Salinas said she learned more about the saint when she migrated to the United States. She took it upon herself to listen to homilies and hear his message of peace.

“My devotion for him has grown stronger,” she said.

Throughout her time planning and participating in archdiocesan events surrounding the canonization of St. Romero, Salinas said she has loved to hear stories of Baltimore-area Catholics who have connections to the saint.

“People are genuinely joyful,” she said. “It’s a moment of pride for all of us.”

Watch the Cathedral of Mary Our Queen’s Mass of thanksgiving for the canonization of St. Romero: